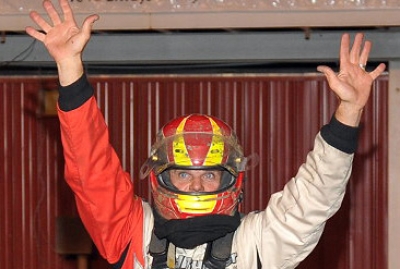 "I felt bad a little bit for these fans, because they came out to see a race and we didn't do a lot of that. We mostly just followed each other around. It is unfortunate, because the heat and the wind today made the racetrack not as racy as we would have liked for it to be. When you start on the front row, you take what they give you. Tonight they gave me the front row and the right lane, so I just happened to be there to take the win," Boen said. "I was trying to make sure that if I caught a lapped car, that I had enough time to try to get around one, because when you are leading like that, a lap car can bunch you up to where the second-place guy can runs up under you or something. Then before you know it, you have a flat or something else can go wrong. You just want to try to give yourself as much cushion as you can, because you can't hardly pass sometimes."

But Boen ended up having no such worries as Anderson tried in vain to catch the frontrunner. "I was happy just to be in the same straightaway (as Kelly), not to mention the same lane as him, because he was gone," Anderson said.

At the drop of the green, trouble struck instantly in turn one with four cars involved in an accident, eliminating Chris Smyser and semi-retired Kevin Gundaker, who piloted a car owned by track co-promoter Reid Millard.

The next attempted start claimed two more victims as Justin Asplin and Matt Johnson tangled to bring out another yellow before a lap could be completed inside turn one, a section of the track where most of the night's cautions occurred.

On the third attempted start, Boen jumped out to an early lead as Joe Kosiski took second from Turner. Boen quickly pulled out to a four-second advantage on Kosiski and by the sixth lap, Kosiski faded as Turner, Anderson, Looney and Randy McGraw overtook him. Kosiski fell back to eighth before his car regained full power.

A lap-eight caution bunched the field, the night's final yellow, and that would be as close as anyone would get to Boen's rear bumper. Anderson put pressure on Turner and grabbed the second spot on lap 10.

Boen built a comfortable three-second advantage at the halfway mark as the field spread all over the track. Boen caught lapped traffic on lap 17, and Anderson briefly closed in before the leader put a lapped car between him and the pursuer to boost his advantage with five laps remaining.

Anderson disposed of the slower car and put Boen in his crosshairs with three to go, but he wasn't able to reel in the leader.

Notes: Boen's Rocket Chassis has a Cornett Engine and sponsorship from Roadrunner Fabrication, Jones Racing Products, Team Peterson Fluid Systems, Saltwater Safari Company, Wolf Pack Racing and BSB Mfg. ... The race was originally supposed to be co-sanctioned by the O'Reilly National Championship Racing Association, but that fell through; Boen is the NCRA points leader. ... The 20-minute feature ended at 8:45 pm and was slowed by three cautions. ... The race was the 24th MLRA event held at Sedalia dating back to 1990. ... Runner-up John Anderson, celebrating his birthday, won the event last year. Anderson owns two MLRA series victories at State Fair, tying him with Billy Moyer for second most at the historic half-mile speedway, behind Terry Phillips with seven. ... Dave Eckrich of Oxford, Iowa, became a victim of circumstance as he was collected in a seven-car melee in his heat, triggered when Mike Collins sandwiched Al Purkey into the turn one infield wall. Purkey and Collins shot across the track, stacking up five more drivers that ended Eckrich and Collins on the hook. Eckrich took a provisional into the feature, moving up nine positions to place 13th. ... With Eckrich battling most of the race from the rear of the field, Al Purkey's fifth-place finish maintained his MLRA points lead. ... Jack Sullivan of Greenbrier, Ark., was a late arrival and missed hot laps, but the GRT house car driver transferred into the feature through his heat; Sullivan finished 10th. ... Five-time MLRA champ Alan Vaughn of Belton, Mo., led his heat at the midway point before losing a fan belt. Vaughn continued having problems in the consolation race, when he was pinched into the frontstretch wall near turn one by Aaron Seabaugh, a wreck that involved five cars. Vaughn missed the main event. ... Other drivers missing the feature: Seabaugh, Collins, Bob Cummings, Zach Goulden and Richard Weber. ... Kevin Gundaker of St. Charles, Mo., who promotes Tri-City and Lake Ozark Speedway, piloted a Late Model for the first time in six years. Gundaker started ninth in the feature and was the first retiree of the race. ... The two biggest movers of the feature were Brandon McCormick (15th-to-ninth) and Hall of Famer Joe Kosiski (13th-to-eighth). ... The only other division was the Winged Outlaw Warrior sprints; Austin Alumbaugh of Higginsville, Mo., won the feature. ... Next up for Lucas Oil drivers is a $3,000-to-win event at Lucas Oil Speedway in Wheatland, Mo., on Aug. 28.