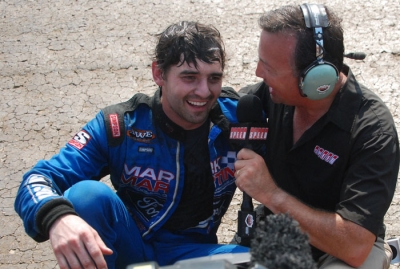 Wiped out from 100 laps in a blistering afternoon race without the benefit of a shaded roof, Landers couldn't quite keep his balance in his rollcage-top celebration, barely had the energy to heave his helmet across the fence to a lucky fan, and then collapsed on the frontstretch, taking a seat for his postrace TV interview.

But it was clear the dramatic victory in a 75-minute race where everyone was forced to pit for tires sparked a lively celebration of hometown well-wishers who might otherwise cheer for Batesville standouts Billy Moyer and Wendell Wallace, drivers who were never in contention.

"We played the strategy just right," said Landers, whose Team Dillon led by crew chief Shane McDowell pitted on lap 42 for fresh rubber, then worked his way into the top five for the final 20 laps.

Landers was second on a lap-83 restart when he overtook three-time race winner Scott Bloomquist — the only driver who hadn't changed right rear tires — and took command.

Landers appeared to have it wrapped up with 10 laps remaining, but Pearson and Owens closed late in the race amid traffic with Pearson working underneath exiting turn four to lead lap 95. Not realizing his challengers had been so close, Landers put his No. 777 into another gear and fought back past Pearson as they ran behind the lapped car of Ray Moore, regaining the lead on lap 98.

"I thought I was going to run second or third," Landers said. "I took a ballsy move there and hit that lapped car there. ... I used him to push up in front of Pearson, and that's how I could (regain) the lead, and I was able to capitalize."

Pearson and Owens — who pitted for rubber before the race's midpoint, 10 laps before Landers — stayed in the tight pack with Landers the rest of the way, but couldn't get by the hometown star whose biggest racing accomplishments have come in modifieds.

The 24th-starting Owens, of Newport, Tenn., slipped by the 17th-starting Pearson on the last lap while the Jacksonville, Fla., driver settled for third after leading his second straight huge-purse event in the final laps. Terry Phillips of Springfield, Mo., was fourth and Brady Smith of Solon Springs, Wis., rounded out the top five.

A race that centered on tire strategy on a sun-baked racing surface that simply didn't allow a right-rear tire to endure 100 laps become a battle royale in the final five laps at the 3/8-mile oval.

"Our car got a little bit better, then it got extremely tight and the tire starting going down there at the end," said the 38-year-old Pearson, who lost a $50,000 payday when Owens passed him at the white flag at Aug. 14's Sunoco Race Fuels North-South at Florence (Ky.) Speedway. "When (Landers) got up under me, I couldn't do anything with him. I thought I could pinch him down under the lapped cars, but it just didn't work out. Our car was just too tight as the tire was going down."

While Pearson was leading laps 95-97 with Landers hot on his heels, Owens was poised in third, waiting to strike if the frontrunners bobbled or collided with Moore's slower car.

"Jared had a great car and a great run. My hat's off to him. It was pretty hectic them last few laps. I knew lapped traffic was going to be a factor again, and it was. It worked out good for us. We were able to pass Earl Pearson on the last lap. We just couldn't quite get Jared," the 38-year-old Owens said. "My car was a bit tight the whole race, and I was pushing a little worse and a little worse, and those last 10 laps I was having to back the car into the corners, it felt like, to be able to come off straight. It worked there toward the end. I was able to shoot under 'em just a little bit, but if it wasn't for lapped traffic, we might not have finished second."

Outside front-row starter Don O'Neal led the first 43 laps, but when polesitter Chris Madden of Gray Court, S.C., went past on the backstretch on lap 44, the tire strategy game was on as teams tried to predict the best time to change tires with crew chiefs hovering around any car that headed to the infield to examine the rubber.

Bloomquist and Madden were among drivers determined to make it the entire distance, swapping the lead midway through the race with Bloomquist out front laps 46-56, Madden ahead on laps 57-61, and then Bloomquist going back out front on lap 62. By then only four cars hadn't pitted for tires, and that dropped to three when Jeremy Payne fell from third and pitted on lap 78, and then Ray Cook got shuffled out of third on the lap-78 restart and pitted three laps later.

When Madden lost second to Landers on the lap-81 restart and pitted two laps later, Bloomquist was being chased by a flurry of drivers with tires relatively fresh from mid-race pit stops. During a lap-83 caution, Landers saw Bloomquist's right rear tire was deflating, and he swept past him to lead lap 84.

Landers credited some mid-race luck that helped him get ahead of Owens, Pearson and others with fresh rubber working toward the front.

"There were some guys having tires go down at the same time, and they bottled the field up, and I took advantage," Landers said. "I passed a lot of good cars there when they bottlenecked; (otherwise) I probably wouldn't have gotten by 'em. But I took advantage of it, just because I had that fresh tire on it and I couldn't hurt it."

He also credited McDowell's setup on his Warrior Race Car and the experience he's gained in years of modified racing.

The ninth-starting Bloomquist, who ended up 12th, was disappointed with the NASCAR-style pit stop strategy required, saying Landers got a "gift" with the victory.

"I think we were the one to beat the entire race. ... from the drop of the green we went forward and passed cars when everybody had good tires. We got out there and tried to set a conservative pace to mileage the right-rear tire. It's just one of those deals," Bloomquist said. "We lasted the longest — I feel like we did the best job of anybody out there by lasting the longest and being in the lead when we had our flat."

Pearson said pit strategy was just part of the deal in a rare afternoon race at Batesville, a track where tire management is key even in nighttime events.

"A Sunday afternoon race usually don't turn out too good, but you had to use the right strategy and we did, coming in early and changing tire. My crew did an excellent job on that call," Pearson said.

"Our strategy worked good. We came in around lap 42 or 46, whatever it was. Me and Jimmy — I guess Landers might've come in as well and got tires. We knew we had the tire to make it to the end, but believe it or not it went flat there late."

Bloomquist ended up 12th in the final rundown, one spot behind Madden.