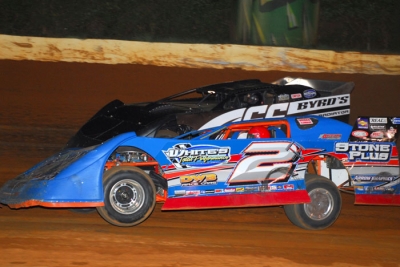 SEYMOUR, Tenn. (Aug. 10) — For the past two seasons, 411 Motor Speedway has run a Tuesday night program once a month during the summer months. The Tuesday Night Tango has become popular with fans and drivers.

Tuesday night was this year’s last installment of the season with $1,000 on the line for the 411 Late Models. Eighteen cars were on hand vying for the extra bucks at the 3/8-mile track.

Mark Leach of Andersonville, Tenn., set fast time during time trials with a lap of 14.71 seconds. Leach spun the No. 1 on the wheel to start straight up in the fast car dash. Leach went on to win the dash and claim the pole position for the 40-lap race.

Leach grabbed the early lead over Pierce McCarter on lap 1. Bobby Giffin quickly took second from McCarter as the field completed the first lap. Giffin began pressuring Leach for the lead. It looked early on as though Giffin would take the top spot from Leach. But Jason Welshan powered his way past Giffin for second at the quarter-way point of the race.

Anthony White, who started ninth, was making his way to the front. The Clinton, Tennessee driver would pass Giffin for third and set his sights on second. Two laps later, White passed Welshan for second.

Just before the halfway point of the race, White began pressuring Leach for the lead. With Leach’s car fading, he could not put up a fight as White zipped by for the lead. Leach would retire a few laps later.

Just as it looked White would run away and hide from the field, a couple of cautions slowed the pace. On both restarts, Welshan dove underneath White in bids for the lead. Each time, White held off Welshan. Welshan continued his pursuit of the lead and had White passed for the lead before a quick caution for debris on the track wiped out the pass. On the next restart, Welshan again pulled alongside White but could not complete the pass again.

As the laps wound down, White finally eased away from Welshan and claimed the $1,000. Behind White and Welshan, Giffin held on for third. Barrett Terry and Mack McCarter rounded out the top five.