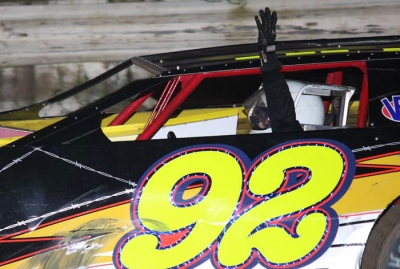 Williams, who hadn't been behind the wheel of a Late Model since last summer, filled in for car owner David Horton at the last minute to run the event. In a car formerly driven by Devane Hillman, Williams started on the pole and held off many challenges from Tippen in the 25-lapper on a surface roughened by overnight rain. | Slideshow

"I don't even know how much we won tonight," the 31-year-old Williams said after his $1,000 victory in the first Late Model race under new promoters at the track formerly called Fast Trax Speedway. "I just glad to be here and driving this car, thanks to David."

Williams got the jump over Donald Watson of Greenwell Springs, La. and Tippen at the green. Watson's time with the frontrunners would be short-lived as he exited the track during a first-lap caution period.

On the restart, Williams took the point with Tippen in pursuit. Williams held a small advantage five laps in, but Tippen dipped under him two laps later to challenge for the lead. Williams fended off Tippen's advances through the corners to keep the spot.

Butch Patton of Jonesboro, La., spun into the mud of the infield out of turn three, but it did not warrant a yellow as Williams continued his pace.

At the midway point, Williams was being trailed by Tippen by three lengths as the frontrunners encountered lap traffic on lap 15.

With three to go, the pair made contact on the backstretch with Williams not giving an inch and remaining in control. Tippen made a last attempt to catch Williams with the white flag out, but Tippen couldn't quite get to the bumper of the winning No. 92 car.

"Allen had an excellent car tonight and was able to pull up beside me and we was drag racing down the straightaways, so I just tried to hold my line," Williams said. "He got around on the outside of me a couple of times coming off of (turn) four, since one and two became a one-grooved corner. I appreciate Allen racing me clean tonight. It was a good race."

Notes: Williams drives a David Horton-owned Miklera Chassis with a Wall 2 Wall Performance powerplant and sponsorship from LMS Truck Center and Horton Racing. ... The checkered flag flew on the 14-minute feature at 11:18 pm. ... Rough track conditions because of heavy rains the previous night hampered several drivers in heat race action. Nicholas Brown broke a radiator, Mark Andrews broke a battery cable and Eddie Taylor broke an axle tube in a heat race accident. ... Timothy Culp of West Monroe, La., lost an engine, ending his night prematurely. ... Kenny Merchant won his heat and was to start fourth in the feature. Merchant's crew opted to skip the feature because of the track conditions. ... Promoter Jerry Jones graded the track at intermission to improve the racing surface for the feature, and moved up the Late Model feature in the program so the surface wouldn't deteriorate much. ... The six-division program drew 80 race cars overall with 1,440 spectators in the fourth week of action since the track reopened. ... The race marked the first Late Model event since Kenny Merchant won October's Spooky 50.