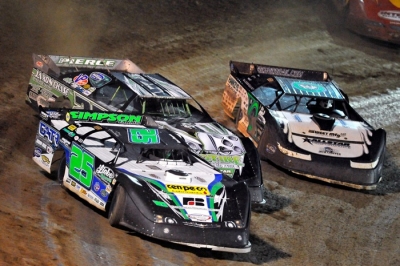 NEW RICHMOND, Wis. (Aug. 6) — Darrell Lanigan of Union, Ky., put himself in position for a signature victory on the World of Outlaws Late Model Series with a powerful effort during Friday night's USA Nationals qualifying program at Cedar Lake Speedway.

The national tour's 2008 champion won the five-lap dash for Friday's five heat-race winners, earning himself the pole position for Saturday night's 100-lapper. He will chase the $50,000 top prize that's on the line in the 23rd annual USA Nationals, which this year carries presenting sponsorship from U.S. Steel Corporation and is part of the WoO schedule for the first time since 2005. | Complete USA Nationals coverage

"The car's good right now, but man, 100 laps out there is gonna be treacherous if the track's like it was tonight," said Lanigan, who raced off the pole to lead the entire dash in his Rocket car. "I'm telling you, it's tough out there. It's wicked-fast right now up on the cushion.

"It's tough, but it's definitely racy. The fans get their money's worth here. I guarantee that for 100 laps tomorrow there's gonna be no relaxing."

Arguably the hottest driver on the WoO tour with three victories and nine top-three finishes in his last 10 starts, Lanigan captured the second heat race and then outgunned fellow front-row starter Tim McCreadie of Watertown, N.Y., to take control of the dash. Lanigan crossed the finish line in the short sprint nearly a half-straightaway ahead of first-heat winner Josh Richards, who got out of shape in turn two early in the dash but recovered to finish second and secure the outside pole starting spot for the USA Nationals.

Don O'Neal of Martinsville, Ind., who was fastest during the evening's 51-car Ohlins Shocks Time Trials with a lap of 14.167 seconds and won the fifth heat, drove Larry Moring's car to a third-place finish in the dash to position himself on the inside of the second row for the start of the 100. Fourth-heat winner Steve Francis of Ashland, Ky., and third-heat winner McCreadie, who won Thursday night's 40-lap tuneup feature, finished fourth and fifth, respectively, and will start the USA Nationals from those spots.

"We've never really been that great up here," said Lanigan, who sits second behind Richards in the current WoO points standings. "But we've got a pretty good car, so hopefully we'll be there at the end. We'll see what we got tomorrow night."

Lanigan hasn't won a crown jewel Dirt Late Model event since he captured both the Dream at Ohio's Eldora Speedway and the Dirt Track World Championship at Kentucky's Bluegrass Speedway in 2003, but he's knocked on the door to victory in several major events over the past several seasons. He's been especially close to a big-money score at Lernerville Speedway in Sarver, Pa., finishing second in the Firecracker 100 for the past three years.

Friday's qualifying program was very good to the WoO regulars. Eight of the tour's 12 travelers on hand made the cut through a heat race and will start among the top 11 spots in the USA Nationals 100, including heat winners Lanigan, Richards, Francis and McCreadie as well as Clint Smith of Senoia, Ga. (starts sixth), Shane Clanton of Fayetteville, Ga. (seventh), Rick Eckert of York, Pa. (10th) and rookie Austin Hubbard of Seaford, Del. (11th).

Outlaws still looking to transfer on Saturday through one of two consolation races or the last-chance race are Tim Fuller of Watertown, N.Y., Chub Frank of Bear Lake, Pa., Russ King of Bristolville, Ohio, and rookie Jill George of Cedar Falls, Iowa.

The two biggest winners in the history of the USA Nationals — five-time victor Billy Moyer of Batesville, Ark., and four-time winner Scott Bloomquist of Mooresburg, Tenn. — will run consies Saturday after falling short in heat action. Moyer led the first 11 laps of the fifth heat before being shuffled back to fifth after a lap-13 restart, and Bloomquist missed by one spot after finishing fourth in the hard-fought fourth heat.

In the NASCAR-sanctioned feature for Cedar Lake's weekly Late Models, Chad Mahder of Eau Claire, Wis., earned $2,500 for his fifth victory of the season.

Saturday's grand finale program, which includes consolations, a last-chance race and the 100-lap USA Nationals and a full show for Cedar Lake's NASCAR Late Models, is scheduled to begin with hot laps at 6:30 p.m.