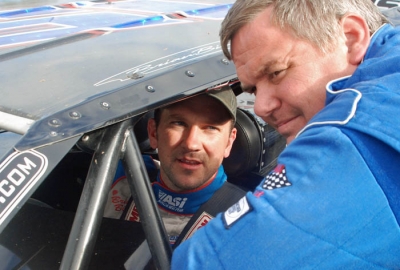 When the World of Outlaws Late Model Series last visited Wisconsin one month ago, Jimmy Mars made his home-state fans proud with a powerful victory.

Can the superstar racer from Menomonie, Wis., shoot down the traveling invaders again when the national tour returns to the Badger State on Wednesday night for a much-anticipated 50-lap, $10,000-to-win event at Shawano Speedway? Mars sure hopes so.

“Any time you can win a race it’s exciting, but if you can win a big one in your home state it’s more special,” said Mars, who dominated the first-ever WoO show at Superior (Wis.) Speedway on July 8. “Winning in front of the people who know you a little more is pretty cool.”

Mars, 38, drew a loud ovation from Superior’s crowd when he downed the Outlaws last month and he’ll certainly earn a similar reaction if he’s triumphant at Shawano. But he conceded that he’ll have to work extra hard to go 2-for-2 in Wisconsin WoO action this season because he’s not quite as familiar with Shawano’s sprawling half-mile oval as he is with Superior’s tighter 3/8-mile layout.

“I’ve never had a chance to run at that place much in my career,” Mars said of Shawano, a venerable fairgrounds track located about 170 miles east of his home. “I’ve run at Superior at least once or twice a year for quite a while so I had a pretty good idea of what I needed for the Outlaw show there and used that to my advantage, but I’ve only been to Shawano maybe two or three times.”

Mars made his last start at Shawano on May 17, 2008 – and it was a good one. With his then 3-month-old son Taylor in the hospital battling a serious case of bacterial meningitis, Mars stayed close to home for a WISSOTA Rumble Series special at Shawano and road off with a convincing $10,000 victory.

“We had a pretty good car that night,” said Mars, who also remembers finishing fifth in a UDTRA event in 2001 at Shawano. “I like racing on half-miles and the stuff we do with our (MB Custom) cars on half-miles has been working pretty well, so hopefully we can have another good night there. I’m looking forward to it.”

Mars will be well rested and his equipment fresh when he enters Wednesday’s action at Shawano, which hosts the WoO for the first time since the World Racing Group restarted the tour in 2004 after a 15-year hiatus. The series did visit Shawano during its short-lived first-incarnation (1988-1989) under late WoO sprint car series founder Ted Johnson, running an event on June 5, 1989, that was won by Minnesota’s Rick Egersdorf.

Since Mars won two of the four features that made up last month’s WoO Wild West Tour (he followed his Superior victory with a score on July 10 at Dakota State Fair Speedway in Huron, S.D.), he has competed in just three events. He last raced on July 23, finishing second in a weekly program at his hometown Red Cedar Speedway.

Mars has spent his off time gearing up for Shawano and the 23rd annual USA Nationals on Aug. 5-7 at Cedar Lake Speedway in New Richmond, Wis., a $50,000-to-win spectacular that is on this year’s WoO slate. He’s also enjoyed going racing with his 6-year-old son Sam, who registered the best finish of his young career with a second-place run in a winged caged go-kart race on Saturday night (July 31).

“We stripped our cars completely down and went through them with a fine-tooth comb over the last two weeks,” said Mars, who has five top-five and six top-10 finishes in nine WoO starts this season. “We want to make sure we’re ready to be game-on for Shawano and Cedar Lake. It’s going to be a big weekend of dirt Late Model racing in my home state and I’m excited about it.”