ALMS rookie of the year has big 2008 plans 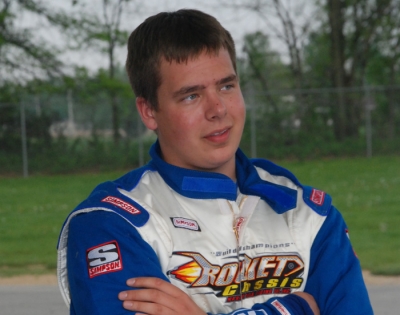 For a young, upwardly-mobile driver like Tyler Boggs, the Sunoco American Late Model Series proved to be a perfect fit. Boggs, 18, of Warsaw, Ind., made the UMP-sanctioned tour the primary focus of his first full season in the Dirt Late Model ranks. He earned a nice honor in the process, winning the 2007 ALMS Rookie of the Year Award.

“With our budget and what we were trying to do in our first year in a Late Model, the ALMS seemed to really fit our program,” said Boggs, who finished sixth in the ALMS points standings driving family-owned equipment. “It’s kind of a Weekend Warrior type series that runs at a lot of tracks that aren’t too far from home for us, and we felt it was a series that would help build our portfolio.”

A friendly, well-spoken teenager, Boggs grew up watching his father, Butch, race Dirt Late Models in the early ‘90s. He initially was more interested in school sports than racing, but he was bit by the motorized bug after attending a local go-kart track with a friend. “I was hooked and told Dad I really want to race,” Boggs said. “He went and got me a go-kart, and it went from there.”

After a few seasons in the karts, Boggs stepped up to the modified division in 2006. He soaked up loads of experience by running nearly 20 different tracks during the campaign and then decided to make the giant leap to a dirt Late Model in ’07. Boggs and his 21-year-old brother Travis, who serves as his crew chief, worked hard during the off-season to advance Boggs Brothers Racing to the Dirt Late Model level.

“We felt like, you gotta be a rookie sometime,” Boggs said. “Dad was behind us moving up to the Late Models, so Travis and I went out and took care of the financial (sponsor) stuff that needed to be done. We put together some portfolios and we got some help from people Dad knew through business (Boggs Automotive).”

Armed with Gaerte power and a Rocket Chassis, Boggs set out with the hope that following a regional tour like the ALMS would hasten their learning curve. They were right on that count, as evidenced by Boggs’s steady competitive progression as the season wore on.

Boggs failed to qualify for two of the three events that made up the ALMS opening-weekend tripleheader (April 20-22) in Illinois and Indiana, but he made the feature in every remaining tour show that he entered. He competed in a total of 12 feature with his season-best finish of fifth coming on June 22 at Attica (Ohio) Raceway Park.

The most memorable moment of his campaign might have come on May 27 at Tony Stewart’s famed Eldora Speedway in Rossburg, Ohio. His 16th-place finish in the evening’s feature wasn’t especially noteworthy, but what he did during qualifying sure turned some heads. In his first career dirt Late Model start at the fearsome half-mile, Boggs won his heat race over the legendary Donnie Moran.

“We started third row in the heat and took the lead on the second lap out of (turn) two,” Boggs said. “Then we beat Donnie Moran to win the heat, which was a huge thrill. It was just one of those races where everything went right.”

Boggs, who recorded four top-10 finishes on the ALMS trail, entered the season finale, on Sept. 2 at Eldora Speedway, sitting fifth in the points standings. He would have loved to claim a top-five points finish in his rookie season, but a disappointing 19th-place run resulted in him losing the fifth spot to veteran Jerry Bowersock.

“We had a rough last night at Eldora,” said Boggs. “We had a little ignition failure, and that cost us. We ended up missing fifth in points by two points.”

But the ALMS Rookie of the Year Award belonged to Boggs — and he hopes it serves as a launching pad for his career.

In that vein, he seems well on his way. The talent and maturity Boggs demonstrated as a first-year driver helped land him a ride for 2008 with the established Dirt Late Model team owned by Shane and Jennifer Halcomb, who have enjoyed success fielding cars for veteran Aaron Scott of Newark, Ohio.

With Scott, a former Eldora track champion, planning to enter only selected events in 2008 because he and his wife are expecting their first child in February, Shane Halcomb offered Boggs the coveted full-time seat in his Custom-powered Rocket No. 1.

“It’s pretty awesome to get a ride after our rookie year with a team as good as the Halcombs,” said Boggs, who became acquainted with the team and Scott while traveling the ALMS schedule. “It makes us kinda take a step back and go, ‘Wow!’ We started in go-karts a few years ago, and look where we are now.”

Boggs, who will begin taking classes this spring in Fort Wayne, Ind., with hopes of becoming a physician’s assistant in the future, has lofty plans for ’08 with the Halcomb team. The new combination, which debuted in October at the Dirt Track World Championship at Ohio’s K-C Raceway, expects to make a week-long racing trip to Florida in February and is eyeing an assault on the grueling UMP Summernationals a few months later.

“We’re going to try to gear up for the Summernationals,” said Boggs, who also is eager to score his first career ALMS victory in ’08. “There’s not a whole lot of guys who just go run the Summernationals their second year in a Late Model, but why not try if you can get the finances together? It’s a great way to get seat time and learn a lot in a short time, so hopefully we can do it.”