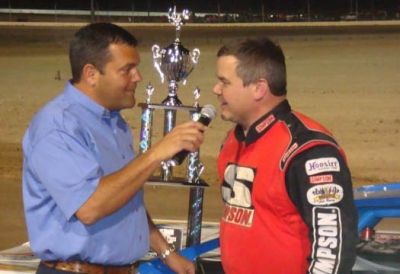 LAS VEGAS, Nev. (Nov. 17) — After three straight 2007 victories at Las Vegas Motor Speedway, Jimmy Mars might be rolling the dice in 2008, too. "I can get pretty used to this Vegas thing," said the Menomonie, Wis., driver, who earned $5,000 for his victory in the Duel in the Desert.

Starting outside the front row, Mars outjumped polesitter Andy Obertello and ran virtually unchallenged to a 40-lap victory in the unsanctioned event. The November victory follows a pair of March victories at the track in the same Wyoming-based Jess Anderson-owned car, a MasterSbilt from Mars.

"It's nice when you can come out and have opportunities like this, where all you have to think about is driving," Mars said. "I knew the start of the race was important with the way the racetrack was looking, so we had to barrel it into the first turn and hope we'd take the lead.

"This car was great all weekend, from Friday afternoon all the way through tonight."

Kelly Boen of Henderson, Colo., coming off a pair of Arizona victories over the past two weeks, made a few peeks inside Mars but ended up a half-straightaway behind at the checkered flag. "Jimmy's really good for a reason," Boen said. "We've finished second to him a couple of times. There's no shame in that."

Scott James of Lawrenceburg, Ind., driving an Oregon-based Rick Wyatt-owned car, was third with John Anderson of Omaha, Neb., and Bobby Hogge IV of Salinas, Calif., rounding out the top five. Obertello faded from the outset and ended up 16th. Three cautions slowed the action, none for major incidents.