For Francis, no more 'When will you win title?' 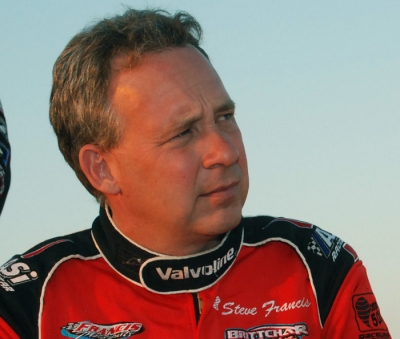 “I don’t have to answer the second-place questions anymore,” said Francis, who had been the tour’s points runner-up in two of the last three seasons. “All that stuff about, Can he finally finish it? Can he get the job done? That’s all over with now.”

Indeed, Francis, 40, of Ashland, Ky., was the ultimate closer in ’07. After grabbing sole possession of the WoO points lead with a seventh-place finish in the season’s 25th feature, the Firecracker 100 on June 30 at Lernerville Speedway in Sarver, Pa., he finished outside the top 10 just once over the final 19 events. He avoided any final-night drama by clinching his first career WoO title with a fourth-place finish in the next-to-last event of the campaign — the opening half of the inaugural Outlaws World Finals on Nov. 2 at the Dirt Track at Lowe’s Motor Speedway in Concord, N.C.

Francis will receive a $100,000 check for capturing the points crown during the WoO banquet Dec. 6 at the International Plaza Resort and Spa in Orlando, Fla.

“I guess this relieves all the frustrations of the way the other (title chases) played out,” Francis said before finishing a close second to Donnie Moran of Dresden, Ohio, in the Nov. 3 World Finals headliner that ended the 45-event WoO schedule. “We lost the first one (in 2004) to Scott (Bloomquist) by a little bit (13 points), and then we lost the next one (in 2005) to Billy (Moyer) on a tie-breaker (most second-place finishes).

“That second-place to Billy was a little hard to take — especially because he passed us on the last lap of the last race at Volusia (Speedway Park) to tie us – but what do you do? You just come back and try again.”

Francis experienced a 2006 season he called “dismal,” finishing a career-low sixth in the WoO points standings. But he regrouped his self-owned program over the winter months — switching to Chevrolet engines built by Custom after a long run with Mopar, hiring Lee Logan as his chief mechanic, working with Integra Shocks, unveiling Valvoline as his primary sponsor — and entered the season-opening races at Volusia's half-mile oozing his customary confidence.

Francis didn’t get off to the fastest start. He failed to finish two of the season’s first six features — March 24 at Columbus (Miss.) Speedway (24th place) and April 17 at Lernerville (16th) — and thus found himself sitting sixth in the points standings. But those DNFs proved to be early-season aberrations; Francis not only didn’t drop out of another race for the remainder of the season, but ran off an amazing string of 38 consecutive lead-lap finishes.

The surge of strength and consistency left Francis with a performance record that showed four wins, 27 top-five and 40 top-10 finishes in 44 A-Mains and a final championship margin of 126 points over Chub Frank of Bear Lake, Pa. — by far the largest spread between first and second since the current WoO points system came into use in 2004.

According to Francis, his march to the points crown was the result of endless work and sacrifice. “I don’t know if you ever deserve anything in this sport. You try to work as hard as you can and earn what you can get,” said Francis. “Any time you win a championship, you’ve earned it. I don’t care what series it is. The level of sacrifice that you have to make is unbelievable, and the people around you have to understand that too.

“My girlfriend Jennifer knows what she has to sacrifice. My daughter understands that this is what Dad does, that this is how we have what we have. And Lee’s wife had to make a lot of sacrifices when he wasn’t home for 30 days in a row — and they’re expecting their first child (in March).”

With Lee Logan, Lee’s father Tim (who fielded the No. 11 dirt Late Model that Francis drove this year in non-WoO events) and other Francis Racing team members sharing an unyielding commitment to excellence, Francis merely got stronger and stronger as the season went on.

ï¿½Since we took the point lead, I think we’ve had one finish out of the top 10,” said Francis, who was absolutely correct with his facts (a 13th-place run after being hampered by an early tangle on July 26 at Indiana’s Lawrenceburg Speedway was his only blemish). “And the only two races we didn’t finish on the lead lap was the one when we broke at Columbus while leading, and when we had a problem with the rear end running fourth at Lernerville.

“Other than that, I’ve run every lap of every race this year. We’re pretty proud of that.”

Francis was at his best down the stretch of the ’07 schedule. After debuting a new Rocket car on July 28 at Sharon Speedway in Hartford, Ohio, stepping up a testing and information-sharing program with Rocket Chassis’s Mark Richards and his fellow Rocket campaigners on tour, and pledging to focus on collecting wins rather than points, “our season just took off,” said Francis.

That would be an understatement. Entering the month of September, Francis had just one win on his ledger — a victory in the tour’s first-ever event in Canada, on June 23 at Quebec’s Autodrome Drummond, that snapped his personal winless drought of more than a year. Then he caught fire, winning Sept. 1 at Tri-City Speedway in Franklin, Pa.; Sept. 14 at Paducah (Ky.) International Raceway; and Oct. 13 at Volunteer Speedway in Bulls Gap, Tenn. (the $20,000-to-win Tennessee Fall Brawl 100 that Francis ranks as his most satisfying triumph of ’07).

While the new car and the increased technical attention Francis paid to it certainly fueled his checkered-flag explosion, it was a mid-summer conversation with his primary challenger for the title that might have put him over the top. “After we got the points lead at Lernerville, we got to where we were fourth- and fifth-ing them to death,” said Francis. “We were good and picking up some points, but we weren’t winning races.

“Then I talked to Chub at Hagerstown (Speedway on July 21) after he dropped out there, and he said, ‘Hey, I’m out of this (points) thing now, so I’m just gonna try to go out and win every race.’ I sat there thinking to myself, ‘If he goes out and wins every race, he’s gonna catch me.’ So we kinda got elbows up, got refocused, and went back to work at that point.

“We decided we were gonna try to win races for the rest of the year, and then if we won the championship, we won it, and if we didn’t, we didn’t.”

Francis had that go-for-it philosophy in play on Nov. 2 when he clinched the title at Lowe's. Needing only to finish within a couple spots of Frank, who trailed by 62 points entering the World Finals, to assure himself of the crown, Francis eschewed a safe approach in favor of one that could either help him win the race or leave him an also-ran.

“We could’ve gone out there and been conservative and done what everybody else did on tires, but we went out and tried to win the race,” said Francis. “And had we not lost a couple cylinders, we might have. We just couldn’t go fast enough on the straightaways.”

Of course, the circumstances of Francis’s rare engine problem were another signal that he just might have been destined to win the 2007 WoO championship. He was able to avoid a disastrous night, much like he did on June 15 at Knoxville (Iowa) Raceway (he recovered from a broken motor in his heat to finish third in a backup car); June 16 at Lakeside Speedway in Kansas City, Kan. (pitted multiple times for front-end damage and a flat tire but still salvaged a seventh-place finish); and Sept. 21 at Bedford (Pa.) Speedway (held on to finish seventh despite racing with a flapping hood obstructing his vision and his car’s rear end cover leaking oil).

“When I lost a cylinder (at Lowe's), I did it the same lap that Chub had his flat (tire),” said Francis. “I saw Chub sitting there with a flat, and I thought, ‘This is kinda karma.’ ” That ‘karma’ continued for the remainder of the 50-lap distance for Francis.

“We got fortunate just to finish the race,” he said. “We broke a valve-spring retainer — something that almost never happens — and a piece of it went over and broke the rocker arm beside it. That ain’t supposed to ever happen like that. You just wonder, How did that happen? And why didn’t the valve just fall down out of the head? That’s pure dumb luck.”

Yes, Francis had every element of a championship season — great equipment, a hard-working team, slick driving and good fortune — on his side this year. It all combined to bring him a well-deserved first WoO title after three runner-up finishes; he also finished second to Billy Moyer in 1989, the final season the tour was run by late WoO Sprint Car founder Ted Johnson before being rekindled by the World Racing Group in 2004.

“I don’t know what the right words are to describe how I feel,” said Francis. “Gratification? Satisfaction? I guess just not having to answer that question — when are you gonna win it?”

There was also some special emotion attached to Francis’s title. It was his first series championship since the sudden 2001 death of his younger brother and crew chief Chris, who had been at Steve’s side from the start of his dirt Late Model career.

“I feel like if I’d have still had him with me all these years, I don’t know how many more (titles) we would’ve had,” Francis said of his late sibling. “He knew basically what I wanted and what I was thinking about before I even came off the racetrack.”

This season, however, Francis did rediscover some of the mechanical connection he had with his brother through the 30-year-old Lee Logan.

“Lee and my brother were the best of friends — they were very, very close,” said Francis. “So to bring him in here and win this thing with him — and to see Lee win the (Integra Shocks) Crew Chief Challenge on Thursday night after all he’s done on this car all year — it really means a whole lot.”

Francis has not yet solidified his 2008 racing effort — he’s made no secret of his talks about forming a dirt Late Model team with NASCAR star Ryan Newman, and his name has come up in discussions concerning the open seat in Maryland team owner Dale Beitler’s No. 19 car — but his intent is to “try to repeat” as WoO champion.

“With the exception of the World 100 (at Eldora Speedway) and the Dirt Track (World Championship), winning championships is what your career is really based on,” said Francis, whose 2007 WoO earnings will total $243,575, including his points-fund cash. “When you start talking to sponsors, they ask, ‘What championships have you won?’ Like when we started talking with the Valvoline people. They said, ‘Show us what you’ve done and what you can do.’