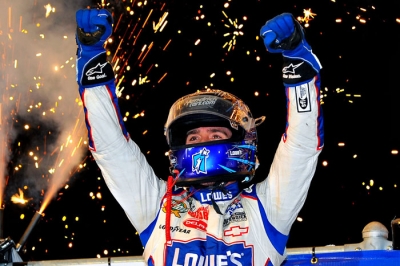 Johnson led all 30 laps at the historic half-mile oval, but repelled challenges from fellow NASCAR drivers Kyle Busch and Clint Bowyer in a caution-plagued feature.

“It’s been a steep learning curve, for sure, but it’s been a lot of fun to do,” said Johnson, who made his Prelude and Dirt Late Model debut in 2008. “We tested a couple of times last year, and I think it screwed me up. I just came here cold turkey and tried to go off of my memory, and it worked. The team knew what they wanted to do with the car through the course of the night with the setup, and Clint was working with us and it just got better and better.”

Bowyer, who owns the car Johnson used to win the Prelude to the Dream, finished .683 of a second behind Johnson in the runner-up spot. Former Prelude winner Carl Edwards rallied from 17th to third while Busch and 24th-starting Denny Hamlin rounded out the top five.

“You know, it’s cool to come home 1-2,” Bowyer said. “A lot of hard work goes into this. This is a lot of fun, but let me tell you, my guys at the shop work their butts off. So, I’m very proud they were able to come and enjoy this night, to see Jimmie win. Me and Kyle, we were battling it out. He doored me down there, and I wasn’t going to let him get away with it. I was going to pass him one way or another.

“It’s really cool to be able to have Jimmie in the car. He’s a four-time champion for a reason, and that proves it right there.”

Eldora Speedway owner and two-time Sprint Cup champion Tony Stewart, who won the past two Preludes, was impressed with Johnson’s maturation on dirt.

“Well, I’m convinced he can drive anything,” Stewart said. “I think if we got him a ride in the space shuttle, he could do it, no worries. I mean, we saw it last year. When I followed him in the heat races, I was like this guy has picked this up really, really fast. So it doesn’t surprise me at all. But it’s cool to have a guy who hasn’t won here before. He had to do it the hard way.”

The field was broken up into four groups, each representing a hospital, and Johnson’s team racing for Levine had the best combined finish, earning the hospital 45 percent of the net money raised.

Notes: Jimmie Johnson’s Warrior Race Car was sponsored by Lowe’s and included a special Father’s Day tribute with the names of 480 fathers on the side of his car, including Jimmie’s own father. ... Eighteen drivers completed 30 laps and three other drivers finished one lap down. ... Most of the 14 cautions were for single-car and minor incidents, but there were a few two-car wrecks, most minor. ... Kenny Wallace lost a left-rear wheel on a lap-11 restart. ... Indy-car racer Tony Kanaan was part of a few cautions. ... Former Dirt Late Model racer and current NASCAR Nationwide Series driver Justin Allgaier fell out when he lost power on the 21st lap.