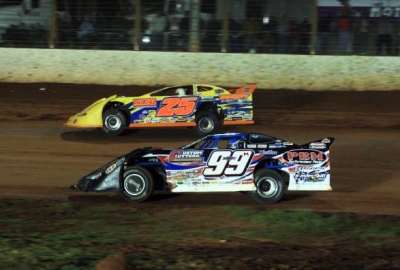 CONCORD, N.C. (Nov. 3) — Donnie Moran has a penchant for coming up big in historic dirt Late Model events. The Dresden, Ohio, superstar did it in 2001 when he won the only dirt Late Model race that offered a $1 million top prize, and he made his mark on the division’s history again by capturing the first-ever World of Outlaws Late Model Series event televised live on a cable network.

With a huge crowd of more than 14,000 looking on from the grandstands and a national television audience watching on the Speed cable network, Moran held off 2007 World of Outlaws Late Model Series champion Steve Francis to win the second 50-lapï¿½ feature of the Outlaws World Finals at the Dirt Track at Lowe’s Motor Speedway.

“God must work in mysterious ways,” Moran said with a smile when asked about his success in milestone events. “We won the first $100,000 purse race ever (for dirt Late Models), we won the Million (at Ohio’s Eldora Speedway) – and now here we are racing for the first time ever on live TV, and we won again.

“I can’t explain why we’ve done so well in these special shows. I’m just thankful I’ve got good people behind me, a good, wonderful family that supports me, and it’s all worked out exceptionally well.”

Title in hand, Francis hangs it out

After clinching his WoO championship the previous night, Steve Francis was racing without any concern about points for the first time all season. He let it all hang out on the final circuit after being unable to shake Moran from his desired bottom groove.

“We couldn’t go on the restarts very good, but once we got going I could run him down,” Francis said. “He was in the (inside) lane I wanted to be in, though, and I couldn’t really do anything with him, so on the last lap I threw a Hail Mary at him to try whatever it took to win."

Francis tossed his Valvoline Rocket to the outside of Moran rounding turns three and four on the final lap, but Moran slid in front of Francis on the straightaway and triumphed by a mere 0.154 of a second.

“My only shot was a Hail Mary on the last lap, but we fell a little short. I had to lift when he slid up because I was gonna catch him in the (rear) corner — and that was gonna be ugly.”

Francis was honored in postrace ceremonies with WoO sprint car champion Donny Schatz. Francis will pick up a $100,000 check for winning the title at the Dec. 6 series banquet in Orlando, Fla.

“A win would’ve topped the weekend,” said Francis, who finished second in the WoO LMS points standings in 2004 and 2005. “With Lee (Logan, Francis’s chief mechanic) winning the pit crew (competition) on Thursday and then us winning the championship, it would’ve been awesome if we could’ve just pulled off" a victory.

“But we’re just happy to run the way we did and prove tonight on national TV that (the title) was not a fluke, that what we’ve done this year was the real thing.”

Fuller charges from 22nd to third

Tim Fuller, 40, made the biggest advance in Saturday's feature, picking up 19 positions to finish third in his first career Late Model start at Lowe's. A winner two years ago in a big-block modified feature at the speedway, Fuller reached third on lap 40 and was just 0.728 of a second behind Moran at the checkered flag.

“The way this weekend had gone, I didn’t think we were even gonna get a top 10 starting where we did,” said Fuller, who failed to qualify on Friday and had to pass several cars to grab the last transfer spot in Saturday's second consolation race. “But (Scott) Bloomquist proved last night that you can pass (coming back from a pit stop to win), and we were able to move up through the pack.

“We were so bad in time trials because we didn’t tighten up enough, so tonight we tightened the car up as much as we do for normal features and it was pretty good. We also had a little bit harder tire on the left-rear and it kept driving.”

The event was tabbed as the first live coverage for a Dirt Late Model event, but a race at the now-closed Santa Fe Speedway near Chicago was televised live on ESPN in 1987. The network scheduled the event believing midgets were on the schedule, but decided to televise the event anyway when they realized Late Models were headlining the card. Billy Moyer won the races. ... Moran became the 19th different winner in 44 WoO events in 2007. His best previous finish in 13 feature starts was second on July 28 at Sharon Speedway in Hartford, Ohio. ... Steve Shaver, the weekend's fastest qualifier in both sessions, salvaged the weekend with a 19th-to-fourth run in Saturday's feature. ... Earl Pearson Jr. led laps 4-17 after starting fourth, but he faded to finish sixth. “I just pushed it a little too hard and blistered the right-rear tire,” Pearson said. “Once I did that I moved around a little bit, but the car was never any good again.” ... Shane Clanton, who started third and led laps 29-36, fell from contention after turn-two contact with Lanigan on lap 39 cost him several spots.