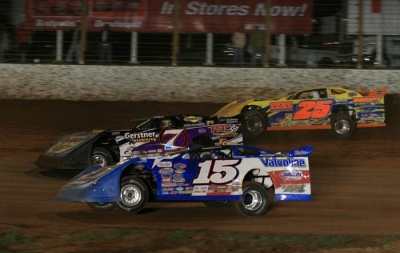 CONCORD, N.C. (Nov. 2) — Steve Francis has a history of close-but-no-cigar title chases on the World of Outlaws Late Model Series. It looks like he'll get the cigar this time around.

With his fourth-place run in Friday's feature at the Outlaws World Finals, Francis set himself up to be officially crowned the 2007 WoO champion on Saturday at the Dirt Track at Lowe's Motor Speedway. He ended Friday's race with an insurmountable 82-point lead over Chub Frank of Bear Lake, Pa., who was hampered by a blown right-rear tire and bent spindle and finished 14th.

Francis, 40, was slowed throughout the race’s second half by an engine problem, but he persevered to finish a solid fourth.

“The car was just unbelievable tonight. I really think had we not been on six (cylinders), we could’ve had something for ‘em. We just couldn’t go fast enough on the straightaways.”

When Francis learned that his 82-point lead over Frank was enough to assure himself of a first-ever WoO championship celebration on Saturday night, he was all smiles.

“It’s just a lot of relief now,” said Francis, who finished second in the WoO standings in 2004 and 2005. “We’ll change the motor tomorrow. We’re having some fun tonight!”

Frank, 45, needed to finish at least five spots ahead of Francis to keep his hopes for the title alive for Saturday, but he fell short. He started 12th and never was a factor.

“The right-rear tire just blew out (on lap six),” said Frank. “Then we got wrecked when we were in the back and got the spindle bent, so it was toed-out pretty good. It was just a bad night all around.”

Frank conceded the marathon title chase to Francis after the race. “I congratulated him,” Frank said of Francis. “He deserved it. He ran hard all year and did what he had to do.”

Scary flips, but no serious injuries

Dan Schlieper of Sullivan, Wis., and Don O’Neal of Martinsville, Ind., rode out wild barrel-rolls in separate turn-one incidents during heat action. Both drivers had their cars bicycle and then flip on restarts.

Schlieper wasn’t initially thought to be injured, but he wrapped his left wrist for Saturday's action and planned to seek medical treatment following the Saturday's racing. O’Neal, who drove the No. 16 normally campaigned by Kentucky’s Justin Rattliff, complained of neck and back pain and was transported to a nearby hospital for testing. Doctors considered keeping him for observation, but O’Neal was released when no problems were found and returned to the track shortly after Friday’s program was completed.

Earl Pearson Jr. started 15th in Friday's feature at Lowe's and was heading for the front through the first half of the race. The Jacksonville, Fla., driver, piloting a LifeLong Locks-sponsored No. 44 for home-state Bobby Labonte Motorsports, climbed as high as second, on a lap-30 restart. But he lost the position to winner Scott Bloomquist on another restart one circuit later and had to settle for third.

“We gambled on tires,” said the 35-year-old Pearson, who used soft rubber. “That’s the only choice we had starting so far back. We were a little bit worried about the sprint cars blowing the mud off the bottom, but luckily they left enough down there that we could run around the bottom and pass cars to get close to the front. But around lap 40, I knew we were done. The bottom kinda slowed down and top got faster.”

Another tough break for Miller

Friday's National Interstate Insurance Hard Luck award of $50 was presented to Jeremy Miller of Gettysburg, Pa., who led laps 1-30 after starting from the outside pole in Charles Buckler’s Rocket No. 24. A broken right-rear axle forced him pitside.

“It was the same bad luck we had at VMS (Virginia Motor Speedway on July 20) and Sharon (Speedway on July 28),” said a disappointed Miller, who continues to seek his first career WoO victory. “This could’ve been three of ‘em in the win column for us, but I guess it wasn’t meant to be.

"That's the way the whole year as gone. I don't know why. It's just been like that. We ran good while we were here. For a weekend race team racing against professionals, I was very happy. I was proud of everybody and all my guys."

Because Miller qualified poorly for Saturday's session, he'll have to run a last-chance race. He said he'd probably sit it out.

"Right now it's still in one piece," Miller said. "If I race tomorrow night, it probably won't be, so I'll be a spectator tomorrow night."

The Outlaws World Finals are scheduled for live television on the Speed cable network on Saturday from 8-11 p.m. EDT with coverage of the Late Model and sprint programs. ... Friday's polesitter Jonathan Davenport faded and dropped out after 22 laps. ... Chris Madden, who finished 12th, was running second on lap 17 when an ignition malfunction forced him to bring out a caution flag and then switch to his secondary ignition. ... Rick Eckert, an eight-time WoO winner in 2006 who is winless in 2007, used a provisional to start 24th in Friday’s 50-lapper. He rode out a sixth-place finish in a car that sputtered constantly because of a spark-plug wire that popped off at the start of the event. ... Eric Jacobsen was in the mix much of the race, running as high as third. But he jumped the cushion on a couple of key occasions and ended up ninth.

Correction: An earlier version of this story reported Dan Schlieper was uninjured in his flip. That was updated with Saturday developments.