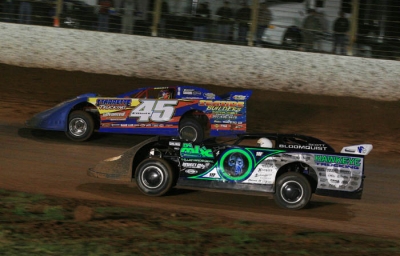 CONCORD, N.C. (Nov. 2) — Scott Bloomquist made a little more history on Friday night. The legendary driver from Mooresburg, Tenn., added another milestone to his already bulging resume, roaring from the rear of the field after an early pit stop to capture the first 50-lap feature of the inaugural Outlaws World Finals at the Dirt Track at Lowe’s Motor Speedway.

After completing his memorable rally by passing Ricky Elliott of Seaford, Del., for the lead on lap 44, Bloomquist established a pair of victory records. He broke a tie with Rick Eckert of York, Pa., to become the winningest driver on the WoO since 2004 (with 16 triumphs), and his fourth career checkered flag at Lowe's gave him sole possession of the 4/10-mile oval’s all-time Late Model feature win mark over Chris Madden of Gray Court, S.C.

Elliott, who inherited the lead on lap 30 when race-long pacesetter Jeremy Miller of Gettysburg, Pa., retired with a broke right-rear axle, held on to finish second in Charles Jarvis’s Rocket No. 45. He was 1.885 seconds behind Bloomquist's self-designed chassis at the finish line.

Bloomquist, who turns 44 on Nov. 14, had a little trouble early early in the caution-filled event. Unhappy with the performance of his car, he went pitside for servicing during a lap-six caution period.

“When we first took off, the car was a little bit off,” said Bloomquist, who started 19th. “I dropped back, and then I went in and we made a few adjustments real quick.”

Bloomquist, who wasn’t afraid to pit because he didn’t face the prospect of giving up many positions, told his chief mechanic, Tommy Hicks, to tweak the shocks on his mount. That slight change was enough to get him back up to speed.

“It was a really good car, and the track kinda came around to me,” said Bloomquist, who cracked the top five on lap 30 when Miller suddenly pulled up lame in turn two. “I think the tires came in, and everything worked.”

Elliott, 42, ultimately fell victim to Bloomquist’s onslaught. A winner of an Advance Auto Parts Super DIRTcar Series big-block Modified 100 at the Dirt Track on April 3, 2004, Elliott relinquished his hold on the outside groove on lap 44 in an attempt to pass a lapped car, and when he returned to the top lane in turn four, the loss of momentum opened the door for Bloomquist to sweep underneath.

“I just wasn’t gonna leave the top (groove),” lamented Elliott, who started 10th and was one of the event’s handful of drivers who used American Racer tires. “When I got to Ricky (Weeks), I had to come off (to lap him). I went down to pass him, and that gave (Bloomquist) position (high) on me.

“By the time I could get moved back up to the top, he had position on me. He outdrove me."

Bloomquist was thrilled that he was able to take advantage to register his third WoO victory of the season. He previously won the Circle K Colossal 100 on April 21 at Lowe's and the Firecracker 100 on June 30 at Lernerville Speedway in Sarver, Pa.

“The way the track was when the race started, it was hard to really say" if his prospects were strong, said Bloomquist, whose $10,225 paycheck pushed his earnings in nine WoO events to $108,888. “But as the groove widened out. ... I just never say die. We’re gonna keep on it until either it happens, or we’re in the fence.

“I love this racetrack when it’s smooth,” added the 2004 WoO champion. “The cushion gave it a little bit of character, made it where you could definitely make a mistake and had to operate on a thin line.

Bloomquist’s victory, which came in front of a near capacity crowd on hand to see the WoO Late Models and sprints running on the same program for the first time in the history of the series, had him feeling confident about his chances for a sweep on Saturday.

“I wouldn’t bet on somebody else,” Bloomquist said with a sly smile.

Bloomquist's self-designed race car is powered by a Vic Hill Racing Engine and sponsored by Miller Bros. Coal and Allstar Performance. ... The first caution appeared on lap three when Clint Smith got into the turn-four wall. ... The second caution came out on lap six when Chub Frank had a flat tire after contact with Steve Shaver. ... The third yellow appeared on the ninth lap when Jeep Van Wormer spun sideways entering turn three. ... The fourth caution appeared on the 16th lap for Donnie Moran's flat tire, and a lap-17 caution came out when Chris Madden stopped in turn two after fading from his second spot. ... A lap-22 caution came out when Randy Korte lost a top-10 run as he pulled up in turn four. ... Darrell Lanigan and Ricky Weeks got together between turns three and four for a lap-23 caution. ... Race-long leader Jeremy Miller pulled out after stopping for a lap-30 caution. ... Lanigan pulled up again in turn two for a lap-32 caution with a flat left-rear tire. ... The final caution appeared on the 47th lap when Junior Pearce got into the backstretch wall. ... Randy Korte was in the Gerstner Plumbing No. 7 instead of his own team's No. 00. ... Junior Pearce got a track provisional as the fastest pre-entered qualifier who failed to transfer to the feature through the prelims. Ben Adkins was added because he had the earliest postmarked pre-entry of drivers not in the feature. ... Jason Meyers of Clovis, Calif., made a last-lap pass of Donny Schatz to win the companion sprint car features as WoO sprints and Late Models ran on the same card for the first time. ... There was a lengthy caution in the sprint feature to repair the turn-two fence, which was damaged during a flipping accident. ... Track general manager Roger Slack apologized to the fans for winds that blew dust toward the grandstands during the night's racing. "I know it'll be better tomorrow night," he said. Slack was also upset with sprint car drivers who he believed caused intentional yellow flags in that division's feature.