Logan picks up $1,000 in crew competition 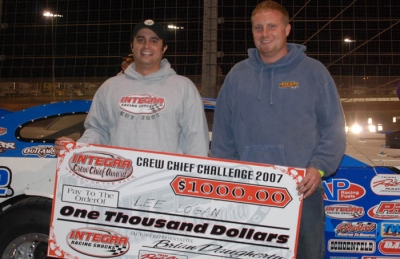 CONCORD, N.C. (Nov. 1) — Dirt Late Model crew members usually do their jobs behind the scenes, working long hours in the shop, making chassis adjustments in the shadows of the dim pits.

So when World of Outlaws Late Model Series crew members talked about participating in the $1,000-to-win Integra Wrench of the Race Crew Chief Challenge — just a few feet from spectators at the Dirt Track at Lowe's Motor Speedway — they weren't too crazy about being on display, said Lee Logan, crew chief for Steve Francis.

"We all got together and said it'd be nice if they would've given us a piece of paper that said 'Nice job' and gave us all $100," Logan said.

But the competition went on as scheduled on the first night of the Outlaws World Finals, and it was Logan who pocketed the cash. It took him 29.755 seconds to make a right-rear tire change after Francis pulled up in his No. 15.

Logan credited his success to a series of tire changes he made at last month's Hoosier Tire test at K-C Raceway near Chillicothe, Ohio. He and another crew member turned their tire changes into a competition, but it was incidental. "We had no idea this was going to happen," said Logan, the only three-time winner of WoO's Wrench of the Race award in 2007.

Logan, 30, of Ashland, Ky., is the son of Tim Logan, a long-time car owner who fields a car for Francis on occasion. The younger Logan was congratulated after the pit-crew competition by his wife Brandie, who is due in March with their first child, a boy.