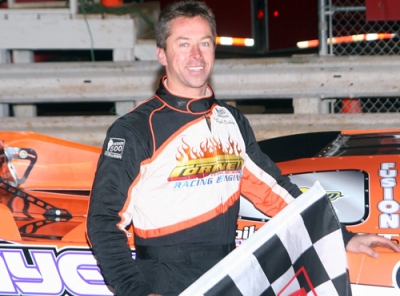 Two more chances. For Rick Eckert, it’s either win one of the two 50-lap features comprise the inaugural Outlaws World Finals Nov. 1-3 at the Dirt Track at Lowe’s Motor Speedway, or go winless on the 2007 World of Outlaws Late Model Series. Who could have predicted that Eckert, 41, of York, Pa., would face such a predicament entering the tour’s blockbuster season finale?

Eckert, after all, has been a perennial victory lane occupant on the series. His 15 triumphs since 2004 have him tied with Scott Bloomquist atop the tour’s win list over that span, and last year he led the series with eight victories, including a record four wins in a row.

So seeing Eckert as the only driver among the top 10 in the WoO points standings to go winless through the first 42 events of 2007 — and, even worse, without a victory in 55 races since July 8, 2006, at Sharon Speedway in Hartford, Ohio — is one of the most mystifying stories of the WoO campaign. It’s been a terribly frustrating year for Eckert, an outgoing personality who is one of the most accomplished drivers on the national dirt Late Model scene. Ask him to grade his ’07 season, and you’ll realize how frustrating.

“It’s been a failure, for sure,” pronounced Eckert, who then added with a smile: “I’d give it a D-minus at best — D as in Dummy.”

Of course, Eckert did not roar into 2007 with the kind of momentum you’d expect a driver to have coming off an eight-win season. For starters, all his ’06 victories came in the first 17 events of the season; a string of bad stretch-run luck dropped him to seventh in the final points standings after he had been challenging for the title. He also entered ’07 with two new crew members (his longtime crew chief Robby Allen and mechanic Dustin Keath departed to take new jobs) and running a MasterSbilt Race Car after spending years in the Rocket Chassis camp.

Some stability with his Raye Vest-owned team would have suited Eckert after the off-season changes, but it didn’t happen. He had to scramble twice to find crew help – Eckert’s two new crew members left in June and their replacement quit in August, so Chad Curran, who came from Arkansas to help Eckert just before Labor Day, is now the fourth mechanic Eckert has had on the payroll this year — and in August he made another chassis switch, to GRT, in hopes of finding a comfort level that had proved elusive all season.

There have been some uplifting moments for Eckert along the ’07 WoO road – specifically, five runner-up finishes, including three consecutive during June’s Great Northern Tour. But he never quite turned the corner and flashed his usual, consistent strength, as evidenced by his subpar qualifying stats (average time-trial position of 17.60, just two heat wins, 12 consolation race appearances) and his failure to string together more than five consecutive top-10 finishes (in contrast, points leader Steve Francis had a streak of 16 consecutive top-10s).

“The only good thing about this season is that it’s almost over,” said Eckert, whose only victories in 2007 have come in unsanctioned events at Williams Grove Speedway in Mechanicsburg, Pa., and Delaware International Speedway. “I just want to put this season behind us and gear up for next year.”

Considering Eckert’s uncharacteristic struggles this season, it’s a testament to his fortitude that he’s ranked fifth in the WoO points standings and has an opportunity to finish fourth with a strong performance in the World Finals. Eckert has certainly been durable and steady, if not spectacular. He has just a single DNF on his record this year (after being knocked into the wall early in the Circle K Colossal 100 at The Dirt Track); he’s completed 2,151 of the 2,250 possible A-Main laps on the tour to date (only Francis, with 2,181 laps, has completed more); and he’s finished on the lead lap in 17 consecutive races (the second-longest active streak behind Francis’s amazing 36 straight).

“It’s pretty unbelievable that we’ve completed as many laps as we have this year,” said Eckert, who has led only 15 circuits in 2007. “That’s a credit to our maintenance program. Finishing races has been sort of my trademark over my career.

“I would have liked to have been faster (all year), but least we have that (finishing record) going for us this year.”

Can Eckert break out of his doldrums and grab a $10,000 victory this weekend at Lowe's — perhaps even on the grand stage of Saturday night, when the Speed cable network will broadcast the World Finals program live to a national audience from 8-11 p.m. (EDT)?

“I’m not overly optimistic, because our season hasn’t left us much to be optimistic about,” said Eckert, who advanced from the 26th starting spot to finish sixth in the WoO Jani-King Southern Showdown on Oct. 10 at The Dirt Track. “But Charlotte is one of those places where anybody can win. You don’t know what’s gonna happen, so if we can get some luck on our side, maybe we can pull one out."