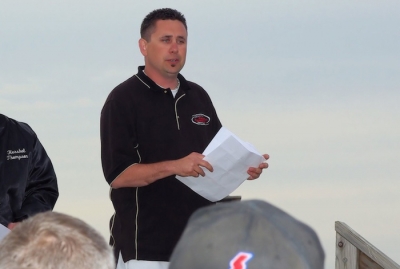 Jason Bodenhamer has always loved State Fair Speedway in Sedalia, Mo., a majestic half-mile oval where he's won more than any other track. But now he's seeing things from a different perspective.

"It's kind of where I grew up learning to race a Late Model was at Sedalia," said the 35-year-old Centerview, Mo., racer. "I never thought I'd be promoting it."

But sure enough, along with partner and fellow racer Reid Millard, Bodenhamer is promoting weekly races at State Fair Speedway. Initial discussions with fairgrounds officials about hosting a few special events turned into full-fledged plans to host Friday night races from April to August at the track for the first time since '03.

"One little idea," Bodenhamer said with a laugh, "just turned into a big ol' mess."

In recent years Bodenhamer has organized a racer's auction, trade shows and even promoted a few races honoring his late father. But like many racers-turned-promoters, he's learning first-hand the stress of trying to pull together details to host weekly races.

The week before Sedalia's April 16 opener, Bodenhamer said he barely had an appetite. He barely slept. He's jokingly concerned about losing his hair. And don't even ask about his plans to quit smoking.

"It's fun," Bodenhamer mustered while reviewing the opening race. "It took me like all weekend to recoup. ... I was like 'Oh, what am I thinking about?' "

Bodenhamer and Millard didn't aim low. They decided to run a three-division program of Late Models, 360 sprint cars and modifieds, focusing on the most popular classes instead of relying on lower divisions. The hefty weekly purse of $21,000 includes $1,200 for the sprint winner, $1,000 for the Late Model winner (and at least $150 to each starter) and $750 to the modified winner.

"We definitely jumped in there and went after it," Bodenhamer said.

The track drew 21 Late Models, 15 sprint cars and 34 modifieds in the opener on a cool evening that cleared up after threatening weather in the afternoon. Bodenhamer was grateful that many of his Late Model traveling buddies, including champion drivers Terry Phillips and Al Purkey, were among those on hand. But he hopes Sedalia draws more sprinters along with more Late Model drivers from southwestern Missouri.

"I'm really hoping that'll catch on and the crowd will appreciate it and we can really get rolling," Bodenhamer said.

The modest opening-night crowd filled a fraction of the 8,000-seat grandstands, but Bodenhamer hopes crowds build as the weather improves and the track develops its $60 VIP package, a program where motor coaches carry groups of 50 people for trips to and from the track. VIPs receive admission, a meal, beverages, souvenirs and special treatment at a 2,400-square-foot Budweiser tent outside turn four. Bodenhamer said five motor coaches were used for the opener and they hope for 8-10 a night.

To draw racers, Bodenhamer is doing giveaways at the drivers' meeting and added a hot pit area so flat tires don't end races for drivers.

While Bodenhamer is focused on promoting, he still plans to drive his Chris Hitchcock-owned car in Lucas Oil Midwest LateModel Racing Association events in 2010, including the three MLRA events at Sedalia — "if I can physically and moneywise handle it," he said. — Todd Turner

Georgia driver Travis Pennington, a rising star in Dirt Late Model racing and son of Hall of Famer Jack Pennington, was convicted March 11 of statutory rape in Douglas County Superior Court and sentenced to 10 years in prison. The 19-year-old Pennington, who was initially lodged in the Douglas County Jail, has appealed the conviction and his father said they hope the appeal is heard by late summer.

Pennington was charged with having sexual intercourse with a 12-year-old girl who at that time was a family friend, according to the district attorney's office. In a phone interview, Jack Pennington said the charges stemmed from an incident when Travis was 16 and family press release said that "Travis did not rape, molest or harm anyone."

"I don't understand why the district attorney went as far as he did on this deal when it was a juvenile offense. I don't know," said the elder Pennington, questioning the possible motivation. "It's bad to ruin a kids' life on account of it."

In Georgia, the law considers it statutory rape if you have sexual intercourse with anyone under 16 years of age with lighter punishment if the victim is 14 or 15 and the offender is within three years older.

Pennington was recently moved to Irwin County Jail in Ocilla, Ga., about a four-hour drive from Douglasville, georgiastockcarracing.com reported Thursday; he is allowed one-hour weekly visits, the website said.

At 17, Pennington became the youngest winner in Southern All Star Racing Series history on July 20, 2008, at Rome (Ga.) Speedway, and he followed that with a career-high $7,000 victory at East Alabama Motor Speedway to become the youngest Alabama State champion in the Super Late Model division.

After splitting seat time between Illinois- and Ohio-based cars the past few seasons, Matt Miller of Waterville, Ohio, will run a full regional schedule in 2010 for the home-state team. Miller's Stephen and Terri McCullough-owned car will compete regionally this season with tentative plans to branch out to a national touring schedule next season.

"I've enjoyed the opportunity to drive for (Moring) the past several years, but the opportunity to be closer to home on a full-time basis and moving into a new shop with the McCullough Motorsports Racing Team is the best thing for my career at this time," Miller said in a team release. "I'm looking forward to the rest of the 2010 season and racing full time for Stephen McCullough Racing again on a full time basis. We will be steady working on building our program to hopefully compete on a national level in 2011."

Miller has competed in a few events for McCullough so far, including a second-place finish in April 17 Sunoco ALMS action at Eldora, and plans to release a full schedule soon. Eldora's biggest races are certain to be among those scheduled events for the No. 7 car that receives primary sponsorship from McCullough Industries and M&W Body Shop. — Wayne Castleberry