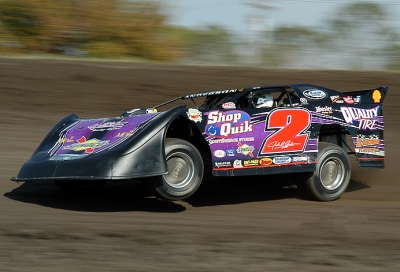 ENID, Okla. (Oct. 28) — Traveling seven hours for a Sunday afternoon race, John Anderson of Omaha, Neb., made it pay off at Enid Speedway Park with a victory in the 42nd annual Winter Nationals. Anderson pocketed $2,500 for his fourth victory of the season on the O'Reilly National Championship Racing Association. | Slideshow

"The track was great today. You could race anywhere, which says a lot about a daytime track," Anderson said. " The 21 car (Ronnie Warman) was fast in his heat race, so I knew I better get the jump on him at the start, and we did. You can never get too comfortable with these guys as they are all right there, ready to give you a challenge at any moment."

While Anderson closed out the season with a victory, Kelly Boen of Henderson, Colo., took the championship without even entering the event as NCRA wrapped up its 24th season. Anderson finished second in series points.

Anderson won a heat race to earn a starting spot outside the front row of the 25-lap feature event and got the early jump on the polesitting Warman. Top series rookie Jimmy Segraves took third early with Delbert Smith and Al Purkey giving chase at the 3/8-mile oval.

Anderson was comfortably ahead after five laps with Warman, Segraves and Smith battling behind him. The leader entered lapped traffic by the eighth lap while Purkey worked his way past Smith, Segraves and Warman to take the second spot by the race's midway point.

A caution appeared on lap 17 when Mike Danburg came to a stop on the frontstretch, and another yellow appeared on the restart when Mike Wiarda got into the wall between turns one and two.

Once racing resumed, so did Anderson's pace as he quickly re-established his comfortable lead and cruised to victory. Purkey finished second while Smith took third from Segraves on the final lap. Ryan McAninch rounded out the top five.