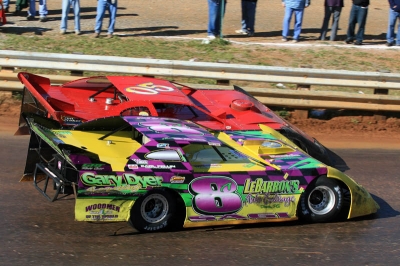 Sagi started third and became the fourth different leader as he took over when Brian Ruhlman had a right-front flat on the 74th of 100 laps. Sagi then held off the challenges of Roy Deese Jr. the final 26 laps and won by two lengths.

“I was out there today with some really good racers,” Sagi said. “I’m just proud to be a part of this and I can’t tell you how proud I am to win it. I had my buddy Roy Deese behind me. We’re good friends and if I couldn’t win it, I’d like to see him win it or Gary Stuhler, too.

"My father helped put the Octoberfest together, along with Randy Grove back in the mid-80s. It’s gotten bigger and bigger. I was driving Limited cars at the time and didn’t get to participate in it, but I was always here watching this race and thought it was pretty cool. Then I thought it was pretty cool when I moved up into Late Models and was able to participate in it, but it’s really cool to win it.”

Jamie Lathroum sped into the lead from outside the front row to lead 2007 track champion J.T. Spence early. But Spence disposed of Lathroum following a lap-three and Ruhlman, the 2000 Octoberfest winner, dropped Lathroum to third on the fifth lap. Lathroum, then Keith Jackson and then Spence had flat tires by the 10th lap with Ruhlman then taking over ahead of Sagi and Deese.

Following the fuel stop, Ruhlman stretched his lead over Sagi to three seconds before a lap-58 caution. Ruhlman appeared to have things going his way, but he suddenly slowed and headed pitside with a right front flat on the 74th circuit.

Sagi moved to the point and stayed in control over Deese and Stuhler while Rick Eckert and 17th-starting Jason Covert joined the procession. Sixth-running Devin Friese brought out the final caution on lap 93 as Sagi sped away to take the two length victory over Deese and Stuhler, a four-time Octoberfest winner. Eckert was fourth. Josh Richards, piloting an Ernie Davis-owned No. 25, crossed the line fifth, but was disqualified for being light at the scales. That moved Covert up to fifth.