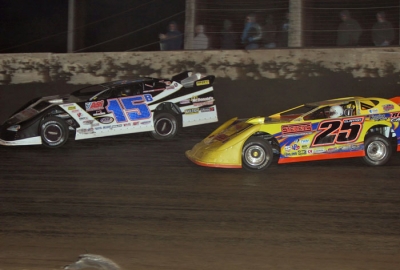 Brian Birkhofer won't say Farmer City Raceway owes him one, but some observers certainly hold that belief. After all, as Birkhofer readies for the third annual Illini 100 on April 9-10 at the quarter-mile oval in central Illinois, it's well documented that the first two editions of the blockbuster World of Outlaws Late Model Series program slipped through his fingers.

In the 2008 Illini 100, Birkhofer was rolling along in the lead when his car caught a rut in turn four, suffered a mechanical problem and spun out of contention. Last year, he led laps 1-93 before watching Shane Clanton slip by and steal the race's $20,000 top prize.

"To be honest with you, the way we've run (in the Illini 100) the last two years is probably better than what I expect out of myself there," said Birkhofer, who finished 20th in the '08 inaugural and settled for runner-up money in last year's encore. "I'd love to win there — it's a big-money race and it's close to home, too — but it's not like I'm disappointed with how I've finished. It's a quarter-mile, so it's not really my cup of tea."

Indeed, Birkhofer makes no bones about the fact that he's most comfortable on the big tracks since he grew up running on half-mile ovals in his native Hawkeye State. But he's looked right at home on the Farmer City bullring the last two springs, leading 144 of a possible 200 laps and coming oh-so-close to back-to-back wins in the biggest dirt Late Model event ever contested in the state of Illinois.

Birkhofer's first Illini 100 loss came in abrupt fashion. As lap 50 was scored he led by a solid margin; before another lap was completed he sat sideways in the middle of turn four and was done for the night after setting the pace since the 10th circuit.

"I hit that hole, bent the lower (control arm) and spun around," said Birkhofer, who could only watch from the pit area as Billy Moyer of Batesville, Ark., won the 2008 event by inches over Shannon Babb of Moweaqua, Ill., in a classic finish. "Who knows what would have happened the rest of the way, but we had a great car. I felt pretty good about our chances."

Birkhofer returned to Farmer City last year and nearly led the 100-lapper from flag-to-flag, falling with just six laps remaining when Shane Clanton of Locust Grove, Ga., slipped underneath to assume command and head to a dramatic victory.

"I got to lapped traffic and I couldn't quite clear somebody," described Birkhofer, thinking back to the circumstances of his '09 defeat. "I kinda saw what was gonna happen without (Clanton) even getting there alongside me yet. I was like, 'Well, he's gonna get me' because I felt myself wheel-spinning too much. Then there he was, sliding by me. I tried to race him for a little bit but just couldn't keep up.

"At least we finished second. It was good to actually finish after the year before, but I would've liked that 20-grand."

This weekend Birkhofer will bring his MB Customs No. 15B to Farmer City in hopes of finally finishing the job in the Illini 100. He's ready for everything the demanding event will toss at him.

"That track kind of throws you for a loop because it's one the first races of the year in the Midwest," said Birkhofer. "Being from the Midwest myself, I know that at that time of year (early April) the frost is coming out of the ground and it affects each track differently.

"At Farmer City, there's slick (spots), there's traction, there's a cushion. You can have it all there — and you also get to lapped traffic real quick at that place. There's a lot of variables to a 100-lap race there."

What would an Illini 100 triumph mean to Birkhofer? It would rank high on his long list of accomplishments — not only because it means he will have beaten a star-studded field, but because he will have conquered a new track.

"It would be the biggest quarter-mile show I've won in my career," said Birkhofer, who owns seven career victories on the WoO tour. "Generally my wins have come on tracks that are 3/8s to half-miles. There's something about running (smaller) tracks where you use an excessive amount of counter-steering that I struggle with. I don't really ever get that comfort zone with it like some guys get — or, maybe they ain't comfortable, but they just manhandle it more than I do.

"I do believe that if I get my stuff right, I can hopefully get the job done. I know what we've done wrong the last two years so we'll try to get it all right this time."