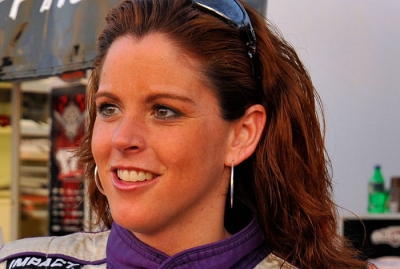 Jill George had never experienced a racing crash quite like the one she rode out last Friday night during qualifying for the World of Outlaws Late Model Series Lone Star 50 at Battleground Speedway in Highlands, Texas.

In fact, not even George's higher-speed, car-destroying accident on Feb. 6 during the ARCA Racing Series 200 at Daytona International Speedway was as unnerving as the wild roll over Battleground's outside wall that left her with a deep cut on her right arm. | Photo of accident

"Everybody can't believe it when I say it, but that Daytona wreck felt like a walk in the park compared to (last Friday night)," said George, a personable 31-year-old racer from Cedar Falls, Iowa, who this season is the first female driver in the history of the series to declare herself a Rookie of the Year candidate. "The Daytona thing was a real hard impact, but I had no visual of the wreck. Even though I wasn't knocked out, I don't even remember hitting the wall.

"But this one (at Battleground) was pretty scary. Something went wrong and I was going straight at the wall, so I just held on to the steering wheel. It felt like, for the first time in a race car, I was holding on for my life."

After turning what would be the 27th-fastest lap of the night's 33-car time-trial session on her first tour of the 4/10-mile oval, George drove her Victory Circle Chassis hard into turn three in hopes of improving her time. But her car suddenly made an uncontrollable bee-line toward the concrete wall, hitting it hard and then launching over it. The car was beginning to flip when it was stopped abruptly — in a spectacular shower of sparks — by the steel poles and cables of the track's catch fence.

George's car came to rest stuck between two bent poles and entangled in the catch fence, its nose behind the outside wall and its roof facing the grandstands. With her driver's side window opening several feet off the ground, she quickly unhooked her seatbelts and crawled out of the car, dropping into the arms of the first rescue worker to arrive on the scene.

Dazed and visibly shaken from the ordeal, George took a moment to regain her composure and then realized she had suffered a laceration just below the elbow of right arm. There was no tear in her driver's suit, so she initially wasn't even sure how the injury had occurred.

"I think I must have hit my arm real hard on the steering wheel," said George, who was in great pain while being tended to by safety crews in the ambulance. "That's the only explanation since my suit wasn’t cut at all."

George was taken to a local hospital, where doctors closed her wound with 10 stitches and released her about 3 a.m. Fitted with a splint to hold her arm in place and thus unable to compete in Saturday night's WoO event at Lone Star Speedway in Kilgore, Texas, George headed home to the Hawkeye State. She visited an orthopedist Monday morning for further examination and X-rays determined there was no break or fracture to the bone in her right arm, allowing her to make plans to return to WoO action April 9-10 at Farmer City (Ill.) Raceway.

"I'm scheduled to get the sutures taken out of my arm next Thursday (April 8) and then our plan is to head to Farmer City," said George, who returned to her full-time job as a chiropractor at Hartzell Family Chiropractic in Waterloo, Iowa, after her Monday-morning check-up and had seen 15 patients by late afternoon. "We're trying to follow the World of Outlaws schedule this year, so it would have been real disappointing if this crash would've stopped us after only a few races. Fortunately, it looks this will just be a temporary setback and we'll be able to keep going.

"I'm not being naï¿½ve and going out there thinking we can win the (WoO) Rookie of the Year; Austin (Hubbard) has been incredible so far this year and we have a long way to go to be anywhere near his level. But we're having fun being out on the road with the Outlaws and we're learning so much by racing with the best drivers in the country. It's really a pleasure to be treated so well by everyone with the WoO and to be accepted as part of the group."

George said her husband, Rick Hartzell, and crew stripped down her wrecked race car on Sunday and determined that the accident was likely caused by a broken upper A-frame on the right-front corner of the machine.

"The sensation I got was that the brakes failed," said George, who is 16th in the WoO points standings after six events. "But it looks like it wasn't anything mechanical with the brakes. From what we could figure out, the upper A-frame broke when I went into turn three and took the brake line with it. I was just holding on after that.

"Unfortunately we've had two bad (crashes) close together, but anyone who races knows it can happen. We've had some setbacks, but we're not giving up."

George's car is set to be sent to Billy Moyer's Batesville, Ark., shop for repairs, including the installation of a new front clip. She plans to enter the Illini 100 in an older Barry Wright-built car from her team's stable and will remain in that machine until her new Rocket Chassis mount is ready for competition.