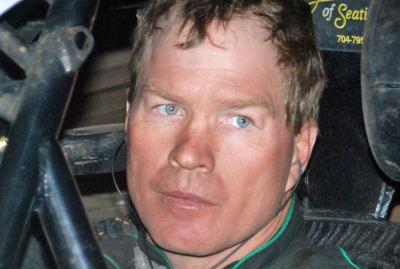 Stapleton and Wall made a friendly bet during Florida Speedweeks regarding the Super Bowl clash between Wall's New Orleans Saints and Stapleton's Colts, and the victory by the Saints means Stapleton will be decked out in a Drew Brees Saints jersey instead

“We’ve just never been able to make it up there," Wall said of the oval that's renowned for being tough on first-time visitors. "I know MasterSbilt is not that far from there (in Crothersville, Ind.). I have heard a lot of good things about the track at Brownstown.

"I know (Don) O’Neal is tough there and I believe Earl Pearson Jr. has won the last two times he’s been there. I am looking forward to going there and see what we can do."

Brownstown will be one of many new tracks for Wall, who was been one of the top regional drivers in Louisiana, Mississippi and Alabama since starting his Late Model career in 2002. He's won some of the region's richest events, including Columbus (Miss.) Speedway's Magnolia State 100, and captured the 2006 Mississippi State Championship Challenge title.

He's traveled more widely the last few seasons, and he's taking his biggest step in 2010 by following the Lucas Oil Series, committing to running open-competition engine events instead of the using the spec-engine package popular in his home region.

“We still feel like we have a lot to learn with our open-motor program," the 42-year-old alligator farmer said. "Getting out on the road with the Lucas Oil series this year we are going to know where we stand on things and what improvements we can make for the future.

“We decided towards the end of last year that we were going to run the Lucas Oil Series this year," said Wall, who had five top-five finishes in 14 Lucas Oil starts in 2009. "We were eligible for the Rookie of the Year award, and the races we had last year with the series where we did compete we did pretty well and that gave us enough confidence to purse running full time with the Lucas Oil Series in 2010.

"It is a very professional organization; the points payback is real good. A lot of the races are on the weekend, and that helps since we have a full-time job during the week with the alligator farm," Wall said.

Wall has posted fast time four times in eight series races, including lowering the track record at East Bay Raceway Park in Gibsonton, Fla., but he knows he needs to improve his feature finishes. He's posted a pair of sixth-place finishes, including one in his previous series outing at Cherokee Speedway in Gaffney, S.C., after running as high as third.

"We are realistic in saying that we don’t have a real good shot at winning a championship this year," said Wall, who is fifth in series points heading to Brownstown. "We feel good about being competitive in the rookie points race. When you go to tracks like (Volunteer Speedway in) Bulls Gap (Tenn.) and all the ones we’ve never been to this year, there’s nothing that replaces the seat time you need at some of these tracks. I think we are going to have to pay our dues this year."