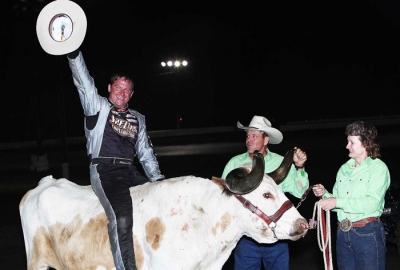 What's the biggest selling point Battleground Speedway owner Mike Walling has going for him leading into his track's World of Outlaws Late Model Series Lone Star 50 on March 26? That would most certainly be last year's inaugural appearance by the series at the 3/8-mile oval located 12 miles east of Houston, Texas.

"It was an awesome show," raved Walling, a 35-year-old Texan now in his second year at the helm of Battleground Speedway. "People around here are still talking about, so all that word-of-mouth is my best advertising. It was the definitely the kind of race that makes people want to come back this year and bring some friends this time."

Indeed, the 2009 WoO program served as a grand coming-out party for the high-banked track, which Walling reopened last year after it had sat dormant for nearly three seasons. Shannon Babb of Moweaqua, Ill., emerged victorious in a hard-fought, high-energy main event that saw cars jockeying for position throughout the 100-lapper. And immediately after the checkered flag fell, Babb donned a cowboy hat and happily hopped on a 1,300-pound Texas Longhorn steer as part of a unique, Texas-themed victory lane ceremony that had the big crowd buzzing.

"The best Late Model drivers in the country were racing all over the track from the first lap to the 100th lap last year," said Walling, who was so pumped up after Battleground's '09 WoO spectacular that he offered free admission to all the fans who returned for the track's regular racing program the following week. "Darrell Lanigan (the 2008 WoO champion from Union, Ky.) went to the back (of the field) twice and still finished second — that's how racy the track was. It was the show of the year at Battleground Speedway."

The return engagement for WoO will pack all the punch of last year's two-day, extra-distance event into one frenzied evening on March 26. A 50-lap feature paying $10,000 to win will headline Battleground's card this year, allowing the WoO to contest a first-ever two-track Texas doubleheader by moving about 200 miles north on March 27, to Lone Star Speedway in Kilgore.

And of course, Walling is once again planning to punctuate the night by having the Lone Star 50 winner meet up with a snorting Longhorn in victory lane.

"Nobody left the stands after last year's race when they saw that big Longhorn come out of the pits and start walking down the homestretch," said Walling. "It was a pretty neat deal, especially when Shannon went over and gave it a kiss on the head. The crowd really got into it and I want to keep it going as something everyone can look forward to when the World of Outlaws come to town."

The World of Outlaws Late Models visits Lone Star Speedway in Kilgore for the first time in six years on Saturday (March 27), taking center stage just two weeks after its sister WoO sprint cars stopped at the revitalized track owned by Sam Hafertepe Sr. and his wife Lisa. Lone Star Speedway is one of just 14 tracks in the United States and Canada that is scheduled to host events for both the WoO Late Models and sprints in 2010.

"We are so excited to have the World of Outlaws Late Model Series coming to Lone Star Speedway," said speedway spokesperson Melody Johnson, who works under the Hafertepes. "There's a lot of Late Model fans in the area, and ever since we reopened the track last year a lot of people have been asking when we were going to have a World of Outlaws Late Model race. We're giving the fans what they want and, judging by the interest in the race, everybody is really looking forward to it."

The sprawling oval hosted a pair of WoO events on April 16-17, 2004, but was shuttered later that season. The facility sat silent until 2009, when the Hafertepes — the parents of WoO sprint car driver Sam Hafertepe Jr. — topped off their October 2008 purchase and ensuing reconstruction of the overgrown property with a grand reopening in late March and a WoO sprint event a couple weeks later.

"Late Model racing is really starting to pick up again around here," said Johnson, who expects Lone Star's expansive 10,000-seat grandstand to be teeming with fans for the return of WoO action. "That's one of the reasons we wanted to have a World of Outlaws Late Model show."

Rick Eckert, who set fast time during the first night of action in 2004, likens the Lone Star layout to a track that's in his central Pennsylvania backyard.

"It's shaped about like Williams Grove (Speedway in Mechanicsburg, Pa.)," said Eckert, who heads to Texas ranked sixth in WoO points. "The straightaways are long like at Williams Grove and the turns are tight, but it's banked more than the Grove so you can carry more speed through the corners."

Driver Clint Smith of Senoia, Ga., hired some help for his chief mechanic (and cousin) Darrell Cooper, who spent most of the 2009 season as Smith's lone full-time wrench. Joining the Georgia veteran's team last week was Brad Baum, the 2007 WoO Crew Chief of the Year while working under Chub Frank. Baum split with Frank midway through the 2009 season and then found a job with rookie Dustin Hapka's operation for the remainder of the campaign.