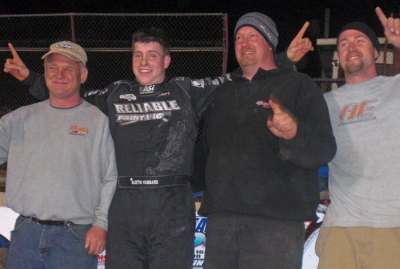 Ah, the exuberance of youth. Austin Hubbard is a talented 18-year-old who's thrilled to be running for a high-profile team on the World of Outlaws Late Model Series — and when he wins a race, he's going to show just how thrilled he is.

Such was the case on Saturday night at Screven Motor Speedway in Sylvania, Ga., where Hubbard followed through on his promise to celebrate wildly after his first career WoO A-Main victory. He had, of course, already broken out his impersonation of Ricky Bobby in Talladega Nights, stripping down to his fireproof long underwear and running wildly on the racetrack – after winning his first major Dirt Late Model event in January at Golden Isles Speedway in Brunswick, Ga., but he was more than ready to do it again.

Actually, Hubbard had to go full-on Ricky Bobby after driving Dale Beitler's No. 19 to his milestone Outlaw triumph. Screven's standing-room-only crowd was expecting nothing less, as evidenced by the way the fans cheered the affable teenager to the checkered flag and waited with bated breath for him to reach victory lane.

"I could hear the fans cheering when I took the lead (from Steve Francis on lap 30) from inside the car," said Hubbard, amazed by the support he received at a track he had visited just once previously (a seventh-place finish in last year's WoO event). "Having all these people here, cheering me on, made me want (to win) even more – and when I got out of the car I saw all the fans up against the fence and yelling for me, so I had to do something to show them how much I like winning."

Hubbard added some new elements to his arm-flapping Ricky Bobby run, this time putting his helmet back on after removing his fireproof top and executing several "I'm on fire!" rolls on the inside of the track. With red clay smeared on his exposed skin, he also ran along the outside wall and high-fived the long line of fans sticking their hands through the catch fence.

"I about knocked the wind out of me when I hit the ground to roll," quipped Hubbard, who replaced Francis as the driver of Beitler's familiar Reliable Painting car and captured his first WoO win in just his fourth start as a series regular. "I had to catch my breath when I got back up."

At the end of Hubbard's postrace interview with WoO announcer Rick Eshelman, he was asked if he was ready to head over to the T-shirt trailer outside turn two to meet his growing fan base. He happily obliged. "Well, I just took my clothes off in front of them, so I don't see why I couldn't sign some autographs for them."

With that, another roar rose from the crowd. A few minutes later Hubbard rode up to the merchandise area on a golf cart and was greeted by dozens of fans — young and old alike — waiting to meet their new hero. He walked into the ASI Racewear trailer and spent nearly an hour signing autographs, meeting fans and even helping sell his suddenly very-much-in-demand T-shirts. He reported that he personally folded 26 T-shirts and handed them to fans.

Yes, a new star has been born in the Dirt Late Model world. And he's open to suggestions for new victory lane celebrations.