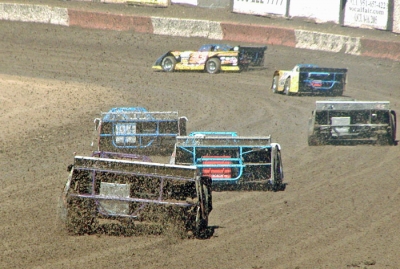 A track that gave up on Dirt Late Models for 2009 is dipping its toe back in the full-fendered waters in 2010 with at least two races for the division on the schedule.

The half-mile oval promoted by Don Kazarian has scheduled a $1,200-to-win Late Model event for March 27 and another Late Model show for July 24. It will be the first time Late Models have appeared at the 15-year-old track since Nov. 22, 2008, when Mike Kirby of Torrance, Calif., wrapped up the season championship.

On March 27, the unsanctioned Late Models will join sprint cars and street stocks on the racing card. The fastest qualifier in the Late Model division will earn a $100 bonus.

“I had a meeting with veteran racer Jim Giardina about a month ago. He and several of the other local (Late Model) drivers wanted us to bring them back," Kazarian said.

When asked if this means more Late Model shows may be scheduled at Perris in 2010, Kazarian was reluctant to commit. "I hope so, but let's see how it works out first," said the man who built the racetrack. "If it is beneficial to the racers, fans and the track, we would love to have them back for more shows in 2011. In fact, we may have them back an extra time or two in 2010.”

Perris, where open-wheeled cars have been more popular, ran Late Models regularly for four seasons before pulling the plug at the conclusion of 2008. Kazarian said running the division was a money-losing proposition, averaging just 14 cars per race in '08 and dramatically fewer fans.