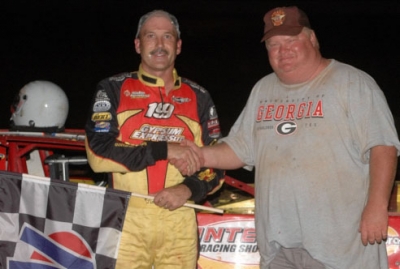 James "Redd" Griffin gets pumped up every time he brings the renowned World of Outlaws Late Model Series to his Screven Motor Speedway in Sylvania, Ga. And judging by the sweet offer he's come up with to generate more buzz about the national tour's third annual visit to his Peach State track on Saturday, Griffin wants to make sure fans from far-and-wide will have an economical opportunity to see first-hand why the Outlaws thrill him so much.

The burly track owner known for his outgoing personality has set a price of $20 for all general admission tickets to the blockbuster evening of action, which features a 50-lap WoO feature that pays $10,000 to its winner. Billed as "Redd's Stimulus Program," the great deal will be one of the biggest bargains of the 2010 WoO tour, and Griffin hopes it will help attract a standing-room-only crowd to witness some of the country's brightest Dirt Late Model stars at the 3/8-mile oval.

"I want to make this show a great value for everyone — especially the people in our area," said Griffin, who has also scheduled a 35-lap Hedman Hedders National Late Model Series event with a $3,000 top prize and a $1,000-to-win super street feature on the undercard. "I want guys to see that 20 bucks is a pretty good price for a World of Outlaws race and say, 'Come on honey, let's go to the races to see the finest drivers in the country and bring the kids along, too (children 12-and-under will be admitted free). Let's go check out the biggest night of the year at Screven Motor Speedway.'"

Griffin, 42, is "looking for a great turnout" on both sides of the fence come March 20. If Mother Nature cooperates with a splendid day to usher in spring, he can even envision a record attendance figure and WoO car count for the track, which is about 60 miles northwest of Savannah.

The timing of this year's WoO event at Screven should provide a boost as well. Both of the tour's previous visits there, in 2008 and 2009, came on blazing hot-and-humid August days, so a March date will be much more comfortable for fans and racers alike. What's more, those late-summer shows at Screven faced off directly against a number of other special Dirt Late Models events. On March 20, there will be no major conflicting races within reasonable driving distance of Screven, dramatically opening up the possible entry list.

"I think running in March is going to work out great for us," said Griffin, whose facility anchors a weekend WoO doubleheader in the Southeast that kicks off Friday at Ocala (Fla.) Speedway. "Now more drivers can come race with us, and we can get more moisture in the racetrack because we won't have to deal with that hot summer sun."

A banner field of drivers is expected to invade Screven on March 20, led by the track's two previous WoO victors, former tour champion Steve Francis of Ashland, Ky. (2008) and Tim Fuller of Watertown, N.Y. (2009). Francis and Fuller will certainly notice one off-season change that Griffin made to the track.

"We added some clay to put a little more banking at the top of the turns," said Griffin, who had to add height to the guardrails at both ends of the speedway to compensate for the increased banking. "We want to open it up and get those cars racing right to the wall. I think we're gonna see more side-by-side racing now." — Kevin Kovac

MLRA LAUNCHES SEASON WITH BUD PURKEY MEMORIAL: The Lucas Oil Midwest LateModel Racing Association opens its 2010 season March 26-27 with the inaugural Bud Purkey Memorial, a $6,000-to-win event at Mid-America Speedway in South Coffeyville, Okla. (The race was originally scheduled for March 19-20, but pushed back by weather.) Six-time and reigning MLRA champion Al Purkey of nearby Coffeyville, Kan., is co-promoting the event with Jim White and Smiley's Racing Products. The track, which has hosted 23 MLRA events from 2000-06, plans $48,000 in prize money at the two-day show that includes four other divisions. The MLRA opener honors Al Purkey's late father, a former racer. — Dan Robinson

MORE LAPS, MONEY AT SEITZ MEMORIAL: The fourth annual John Seitz Memorial at River Cities Speedway in Grand Forks, N.D., will pay at least $920 to every starter (up from $500) and run 92 laps (up from 50) on Sept. 10-11, said new race promoter Chris Stepan of FYE Motorsports. The $9,200-to-win WISSOTA-sanctioned events honors the late Bemidji, Minn., driver of the No. 92 car, a popular racer throughout the WISSOTA region. "The first three years, this race had been great in memory of John, but with these few changes, the weekend should really be something special now," said track promoter Josh Hill. "Hopefully we can get 60 or more cars here and can put on a show for the fans, who normally don’t get to see races over 50 laps in this area." Previous race winners are Pat Doar of New Richmond, Wis.; Justin Fegers of Mound, Minn.; and Mitch Johnson of Hickson, N.D. — FYE Motorsports

LATE MODELS RETURN TO PERRIS ON MARCH 27: Perris (Calif.) Auto Speedway will host its first Late Model event since November 2008 with an unsanctioned, $1,200-to-win event on March 27. Perris also has a July 24 Late Model race on its schedule, and promoter Don Kazarian said more events for the division could be added. “I hope so, but let's see how it works out first," he said. "If it is beneficial to the racers, fans and the track, we would love to have them back for more shows in 2011. In fact, we may have them back an extra time or two in 2010.” Mike Kirby of Torrance, Calif., won the last Late Model event at Perris on Nov. 22, 2008, wrapping up the season points championship. — From track reports

ODDS AND ENDS: Appalachian Mountain Speedweek officials have switched to group qualifying for 2010 events, scheduled for June 5-11 at tracks in Maryland, Pennsylvania and Virginia. The format change for the second-year miniseries will make time trials fairer and allow the show to move along more quickly, officials said. ... Indy Pic-A-Part is sponsoring Kankakee County (Ill.) Speedway's Late Model division in 2010, boosting the feature purses. In addition, Pic-A-Part pays a $100 bonus to weekly winners who have maintained perfect attendance. ... Bill Pink Carburetors, already a sponsor of the World of Outlaws Late Model Series, has expanded its sponsorship to all Late Model divisions of the World Racing Group, including the UMP DIRTcar Summernationals and MARS DIRTcar Series. ... The O'Reilly All Star Late Model Series has added a pair of $5,000-to-win events in Canada on Aug. 11-12. Quebec's Autodrome Granby hosts the weekend-opening Granby 50 with Brockville (Ontario) Speedway running the Brockville 50 presented by BOB FM and Boston Pizza.