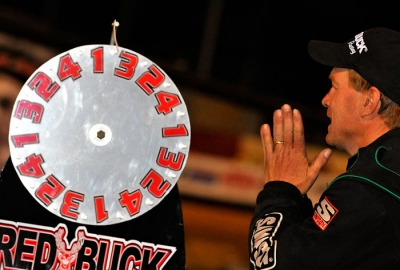 Drivers no long have to pray at the inversion wheel. (thesportswire.net)

The Lucas Oil Late Model Dirt Series inversion wheel has been spun for the last time. In amending its race format, the series has ditched heat-race inversions and will straight all prelims straight up according to time trials, officials announced this week.

"This is something the series has monitored since June of 2007. We noticed as the talent pool continued to rise, the need for inverts has gone by the wayside," said series director Ritchie Lewis. "Oftentimes in the past, the series had a significant difference in time trials of the cars that were inverted. This provided great racing that the Lucas Oil Late Model Dirt Series fans have come to expect. Now, that time differences have gotten so close, it just isn't the same case today."

The inconsistency of passable track conditions played a factor in the series decision to eliminate the wheel that was previously spun by the fast qualifier to determine how many cars would be inverted for heat lineups.

"We have carefully watched the inversion wheel and the role it's played in the actual events," said Rick Schwallie, project manager for the series. "We found in most cases, the few times the inversion wheel actually inverted up to four cars, the drivers were able to somewhat overcome the inversion as long as track conditions were great.

"We never want to have a race on a track that has less than favorable conditions, but in the dirt environment, where so many variables make up a track's conditions, it's not totally avoidable."

With racers "at the top echelon of the sport, there isn't a need to shuffle the starting lineup to provide the best racing," Schwallie added.

In other series news, the series changed its June 18 date at Cleveland (Tenn.) to June 17, a Thursday, to make room for a $20,000-to-win event at Volunteer Speedway in Bulls Gap, Tenn., on June 18-19. The series also added a Sept. 17 event at Winchester (Va.) Speedway, a Friday race complemented by a previously scheduled Sept. 18 event at Virginia Motor Speedway in Saluda, Va. — James Essex

SUMMERNATIONALS KICK OFF WITH 19 STRAIGHT RACES: After a few minor changes to the UMP DIRTcar Summernationals schedule, the grueling month-long tour will launch on June 16 with the first of 19 straight nights of racing at 18 different tracks. While the schedule excluded Monday races in recent years, the series will compete the first two Mondays during the 19-race stretch before a two-day break July 5-6. Among additions to the schedule were a June 21 race at Vermilion County Speedway in Danville, Ill. (now promoted by Hall of Fame driver Bob Pierce) and a July 14 event at Kokomo (Ind.) Speedway. The 28-race tour, featuring $5,000- or $10,000-to-win events, wraps up July 17 at Oakshade Raceway in Wauseon, Ohio. — From staff reports

COAL COUNTRY CHAMPIONSHIP ON TAP AGAIN: For the second consecutive year, Dog Hollow Speedway in Strongstown, Pa., and Marion Center (Pa.) Speedway are teaming up for the Coal Country Championship Series (previously the Force Inc. Championship Challenge). Each track championship pays $3,000 with a $10,000 bonus to any Super Late Model driver who can sweep both titles. Sam Stile of Charleroi, Pa., pulled off the feat last season, earning $16,000. — From track reports

ODDS AND ENDS: I-37 Speedway in Pleasonton, Texas, has moved its race nights to Saturday from Fridays for the 2010 season. The track runs Limited Late Models weekly and Moe VanKirk is the two-time and reigning champion. ... Thunder Valley Raceway's May 22 UFO Race Championship Series event has been dubbed the Shawn McGarvey Showdown in honor of the late Pennsylvania driver who died in a logging truck accident last year. The race winner will earn $2,508 (the eight in honor of McGarvey's number). ... The Southern All Star Dirt Racing Series announced a three-year agreement with VP Racing Fuels as the official series fuel.