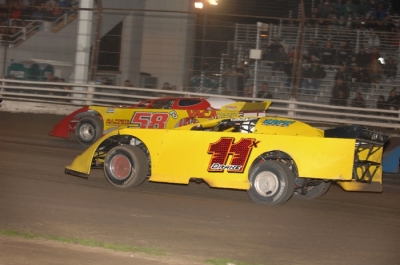 “This place has be awfully good to us,” says Drake. “We’ve raced here six times now and have won all six. It is definitely a challenge and way different at both ends.”

Starting from the pole position of the 30-lap feature, Drake powered by Bakersfield’s Brad Pounds into turn one and used the outside line to gain momentum. The move put some distance between himself and the rest of the field as he set a blistering pace. As the laps clicked off, Drake soon reached slower traffic that slowed his progress and Pounds seized the opportunity to make a challenge.

A yellow for debris on lap 17 bunched the field together in a double-file restart. Pounds and third-running Mike Kirby of Torrance, Calif., were within striking distance of the leader, but on the restart, Drake got the jump and motored away from the challengers.

Again reaching slower traffic, Drake sliced his way through the field and scored the victory. Pounds finished in the runner-up position with the ninth-starting Kirby just behind. Veteran driver Mike Johnson from Lompoc, Calif., in the No. 7 formerly driven by Billy Griffin, was fourth and Jeff Decker of Morgan Hill, Calif., rounded out the top five.

After the checkered flags flew, Tommy Malcolm from Corona, Calif., who finished ninth, flipped his car at the entrance to turn three. He was uninjured.