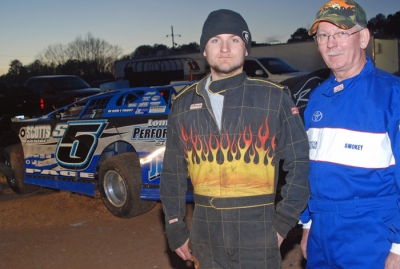 Lonnie Morse remembers the first time that Michael Page sat behind the wheel of his Rocket Chassis, rallying from the tail for a seventh-place finish last fall at Dixie Speedway in Woodstock, Ga.

"I about had a heart attack," the 67-year-old Morse said, exaggerating only slightly while patting his ticker with his right hand.

But if Page's few outings in Super Late Model action are any indication, the No. s5 may provide a few more heart-stopping moments for Morse as the car owner and driver hook up to chase the points championship between Dixie and Rome (Ga.) International Speedway in 2010.

Page made the starting field for his richest Late Model race last month at Green Valley Speedway in Glencoe, Ala., overcoming engine woes at the Southern Regional Racing Series-sanctioned Bama Bash, where he ended up 17th.

That was just his third official start in a Super Late Model for Page. Last year, driving Tracy Watson's car at Dixie, Page led 25 laps of a 30-lap feature before a broken crank knocked him out of the race. Then he made his second start in Morse's car, making his 24th-to-seventh run.

Page comes by his racing honestly. He's part of a dyed-in-the-wool racing family from Douglasville, Ga., that raced at the now-closed Seven Flags Speedway and has now migrated to Dixie. Father Chuck competes in the econo bomber division, 28-year-old son Mark runs Crate Late Models and 26-year-old Michael moves up from Limiteds to Supers. Mother Darlene Page herself has also competed, finishing as a runner-up in the hobby division at Seven Flags in years past.

Chuck Page is glad Michael, a race car bodywork specialist, is getting a chance in Morse's car, and he's proud his family can continue to successfully field race cars in multiple divisions.

As Page talked about his racing family on a cool evening at Green Valley, Morse — nicknamed Smokey — relaxed in a tattered blue recliner in a cluttered trailer, trying to stay warm. The gray-haired car owner with a trim mustache got some help at the Bama Bash from younger brother Tom Morse, who flew down from Illinois with buddy Rod Fleisher to help the team.

Lonnie Morse, a retired aircraft inspector for Delta, is certain that Page can be a solid contender at Dixie, an historic dirt track with the reputation for rugged weekly competition. A former drag racer when he lived in California, Morse has fielded Dirt Late Models a few years, but plans on stepping things up in 2010 to become a regular winner. Just being part of the race isn't enough, Morse knows.

"I can't do that with these Page boys," said the great-grandfather, who builds the team's engines. "They're going to win races, or they're going to move on."

Page should be OK, because Morse says he keeps things simple.

"I've only got three rules for my drivers: Drive your heart out; try your best not to get hurt; and if somebody bumps him, bump him back down the road." — Todd Turner

PLANS MADE FOR NEW TEXAS SERIES: If a pair of racers have their way, the Lone Star State will get a new Dirt Late Model series for 2011. The Texas Super Late Model Racing Series is slated to begin with a single race this season and develop into a 10- or 12-race tour next year, offering a racing organization that allows multiple engine configurations. Texas Dirt Late Model racers Ricky Begnaud and Doug Begnaud (no relation) have connected with long-time racing announcer Chris Teter to develop a series to fill the void of weekly Late Model racing in east Texas. Houston Raceway Park, Battleground Speedway, Gator Motorplex and 105 Speedway are among targeted tracks. "Many of the traveling guys like the idea of racing close to home on their off weekends, and I hope that this series will give Texas a chance to showcase their talent right here at home," Ricky Begnaud told the Houston Chronicle. "Hopefully, this will put Late Models back in the spotlight here in Texas.” — From staff reports

ELDORA SCHEDULES TESTING DAY: Legendary Eldora Speedway has added a test and tune day to its 2010 slate of events, giving teams a rare chance to practice at the half-mile oval in Rossburg, Ohio. Practice is scheduled to start at 2:30 p.m. on March 27 with gates opening an hour before practice. The only restrictions on practice are driver age (16) and a safe race car. Pit passes are $20 while grandstand admission is free. Eldora's first Late Model event of the season is an April 17 American Late Model Series race. — From track reports

MILLER RETURNS AS PROMOTER AT ELKINS: D. Jay Miller spent several seasons as a co-promoter at Elkins Speedway in Kerens, W.Va., and when he stepped down after 2005, he thought his promoting days were over. "I guess you should never say never," Miller said with a laugh after saying he'll replace A.J. Rockwell as promoter at the 3/8-mile oval for 2010. Rockwell's business interests forced him to give up the reins to Miller, who plans to continue with the same divisions. "The timing seemed right and it's exciting to be back at the speedway," Miller said. "A.J. is certainly leaving Elkins Speedway in a lot better shape than what he found it in, and we look forward to building on that momentum and moving Elkins Speedway further into the dirt track racing spotlight." The track is expected to begin weekly racing the first Friday in May. — Jimmy Henry and staff reports