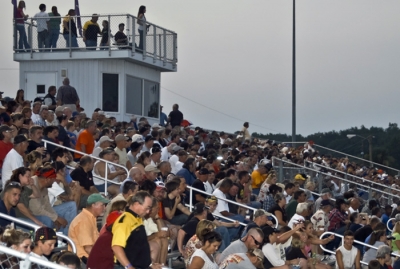 Ocala fans pack the stands for an '09 event. (cgphotographylargo.com)

After more than 17 years without hosting a major Dirt Late Model touring event, Ocala (Fla.) Speedway is poised to host the World of Outlaws Late Model Series on March 19. The tour is scheduled to make a first-ever stop at the central Florida track, focusing the attention of the Dirt Late Model world on a venerable facility.

Now in just its third season of dirt racing following more than a decade as an asphalt track, Ocala Speedway is ready to bust into the full-fender spotlight. In that vein, here's some things a Dirt Late Model fan needs to know about a track that will end a month of inactivity for WoO competitors with a $10,000-to-win event:

• Ocala Speedway is the oldest track in Florida, seven years older than Daytona International Speedway. But while 2010 marks its 58th year of operation, it certainly doesn't look its age thanks to numerous facility upgrades over the past decade, including the installation of a stadium-style grandstand with seating for 4,000, bright Musco lighting and a superb sound system; construction of buildings featuring checkerboard floors, new restrooms and a children's play area; and an all-asphalt and cement pit area.

• The track operated with a dirt surface from its birth in 1952 until being paved in 1995. Clay was put back down prior to the 2008 season and the speedway has been building momentum ever since.

• The track is owned by Michael Peters and his fiancee Angie Clifton. The couple — Peters, 40, is a former jet pilot for the defunct ATA Airlines and Clifton, 42, is a vice-president of a bank — got a boost by switching the track from asphalt to dirt for 2008. "It was the right decision to make," Peters said of Ocala's resurfacing. "The difference has been like night and day. We tried everything to get people to come out when the track was paved but just weren't getting anywhere. Now there's just so much more excitement about the racing, it's made my job that much easier."

• Dirt Late Models running under the National Late Model Series rules compete every other week at Ocala. The class, which alternates as the track's headliner each Friday night with modifieds, draws solid fields, and Peters said several regulars plan to enter the WoO event in hopes of making the starting lineup.

• The speedway boasts a unique layout. A D-shaped, 3/8-mile oval with a pronounced dog-leg on the backstretch, it's a challenge for any driver to navigate smoothly. "One and two are long, sweeping turns that guys can go through wide-open," Peters said, "but then they have to slow down for a much tighter hairpin through (turns) three and four. "It makes the racing real interesting. A lot of people will actually set their car up for one end or the other because they're so different."

WoO drivers are in the middle of a month-long break from competition, but former champion Steve Francis gave a group of the national tour's top stars a reason to get together away from the track.

Francis, 42, of Ashland, Ky., celebrated his marriage to Amanda Ferrell on Feb. 28 in Bardstown, Ky. — and there to share the evening with him were four of his closest friends on the circuit.

The quartet of WoO LMS regulars who made the journey to central Kentucky included Shane Clanton of Locust Grove, Ga., Clint Smith of Senoia, Ga., Darrell Lanigan of Union, Ky., and Tim Fuller of Watertown, N.Y. Clanton and Smith served as groomsmen for Francis, and Clanton's son Ryan, 7, was the ceremony's ring-bearer.

Nearly 300 people attended the wedding and reception, which was filled with talk about Dirt Late Model racing. Virtually everyone on hand had some sort of connection to the sport considering the backgrounds of the couple — Francis has been a professional driver for more than a quarter-century and the 26-year-old Ferrell's parents, David and Anita, promote Bluegrass Speedway, the nearby half-mile oval that hosts the World of Outlaws for the first time on May 8.

"We just all had a good time," Smith said. "It was a real fun wedding, like a big 'ol racing party, really, because there were so many people there who were involved in racing."

The break in the WoO schedule allowed Francis and his new bride to enjoy a week-long honeymoon in Jamaica without having to worry about heading directly to a racetrack upon their return. It will leave Francis nearly two weeks to prepare his self-owned equipment and stock his brand-new hauler for the tour's Southeastern doubleheader on March 19 at Ocala Speedway and March 20 at Screven Motor Speedway in Sylvania, Ga.

WoO drivers now have another reason to get up on the wheel every night in 2010. A $500 cash prize will be presented at the end of the season to the winner of the DirtonDirt.com Hard Charger Award, which has been designed to reward the driver who advances the most cumulative positions in feature events over the course of the national tour's busy '10 schedule.

Tim McCreadie of Watertown, N.Y., leads the Hard Charger standings after the tour's pair of season-opening events earlier this month at Volusia Speedway Park in Barberville, Fla. The 2006 WoO LMS champion made a spectacular 25-position improvement in the 50-lapper on Feb. 13, racing forward from the 28th starting spot to finish third.