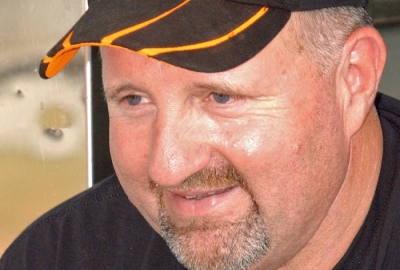 Ricky Weeks of Rutherfordton, N.C., has been racing more than 25 years and won dozens of big-purse races, but there's no doubt the 50-year-old driver will always remember his 2004 victory in the Skyler Trull Memorial.

“The first one I won was the largest purse I had gotten," said Weeks, a two-time Skyler Trull Memorial winner. "It is a super special memory because it kept my race team going at the time."

Weeks plans to go for his third victory in the event on March 13 at Carolina Speedway near Gastonia, N.C., when the Carolina Clash Super Late Model Series opens its season with the $4,000-to-win event. It's a win that could give a new partnership a jump-start.

Weeks has joined forces with Don and Herbert Way for 2010 and will pilot the team's No. 54 while maintaining the racing equipment in Weeks's shop. Adams Electric has also come on board as a sponsor for Weeks, a five-time Carolina Clash champion who has won two of his series-leading 29 races at Carolina Speedway.

Besides Weeks, other past Skyler Trull Memorial winners are Chris Ferguson, Jonathan Davenport, Chris Madden, Randle Chupp, Dennis Franklin, Mike Duvall and Wesley Hood. Many of them are expected to be at Carolina Speedway for the late winter event.

Weeks, a father of three and grandfather of two, has been a regular competitor in the event that honors a girl and racing fan who died at age 5 after a battle with leukemia.

“The Trull Family has been super nice to me and my family. They gave us a swingset that was Skyler’s for my granddaughter Rylie," Weeks said. "We love to support any charities that help children."

HAGERSTOWN OPENER POSTPONED (AGAIN): Remnants from back-to-back snowstorms that dumped more than 40 inches of the white stuff at Hagerstown Speedway forced promoter Frank Plessinger to postpone the Feb. 27 season opener. “We can’t seem to get a break with the weather for our opening dates," Plessinger said. “It has been since 2002 that we started our season on the scheduled date.” The postponed race, an Octoberfest qualifier for big-block modifieds and Super Late Models, was rescheduled for March 6. — From track reports

SRRS MANDATES REAR-TIRE RESTRICTIONS FOR 2010: To reduce the illegal use of chemically altered tires, the Southern Regional Racing Series has instituted rules that require teams to use the same rear tires from time trials through the main event. Rear tires will be stamped upon tech inspection and be used throughout events on the Tennessee-based tour. Flat tires suffered on the track can be replaced with series approval, but flats suffered in the pits will drop the car to the tail of the lineup of the next race. Waivers are in place for events when track conditions cause increased tire wear. Also, for events with 50 or more entrants or races paying at least $10,000-to-win, drivers running consolation races can use different tires in the consy, but must switch back to their original tires if they transfer to the feature. — From series reports

J&J STEEL PROMOTES PERFECT ATTENDANCE: Series sponsor J&J Steel makes perfect attendance pay off again this season for drivers following the IMCA-sanctioned Deery Brothers Summer Series. All drivers who compete at the first 15 tour events of 2010 will be entered in the $750-to-win, $200-to-start J&J Steel Ironman Challenge on opening night of the Sept. 17-18 Pepsi USA Nationals at 34 Raceway in West Burlington, Iowa. "We have never had fewer than 10 drivers achieve Ironman status in the history of this program with J&J Steel, and that is quite a feat in a season like last year with a near record number of races,” said Kevin Yoder, IMCA's marketing and tour director. “Fewer races and a more manageable schedule in 2010 should increase the number of drivers seeking perfect attendance and early indications are that we may have the deepest J&J Steel Ironman field in recent memory." Sixteen events are on the 2010 Deery schedule, including a first ever visit to Dubuque Fairgrounds Speedway on April 18. — Bill Martin

VOLUNTEER RACING SERIES ANNOUNCES NINE RACES: The first-year Volunteer Racing Series has announced nine races for 2010, six of them between a pair of tracks in northwest Georgia and just one in the Volunteer State of Tennessee. Besides races at Boyd's Speedway in Ringgold, Ga., and North Georgia Speedway in Chatsworth, Ga., VRS races are scheduled for Lake Cumberland Speedway in Burnside, Ky. (on June 26), Wythe Raceway in Rural Retreat, Va. (on Aug. 7) and Duck River Speedway in Wheel, Tenn. (on Aug. 14). Most races pay $3,000 to the winner. — From series reports

ODDS AND ENDS: Langlade County Speedway in Antigo, Wis., has dropped the WISSOTA Late Model divisions from its weekly classes, but plays several $1,500-to-win specials for the division. ... Illinois promoter Brian Stuart has taken over the promotional reins at Farmer City (Ill.) Raceway, which will continue weekly racing with UMP DIRTcar Late Models. ... Dan McDonald of Girard, Pa., will take over as 2010 promoter at Raceway 7 in Conneaut, Ohio. McDonald and family members have competed at the track the past 30 years. Fastrak Crate Late Models will be a weekly division with Super Late Models running occasional specials.