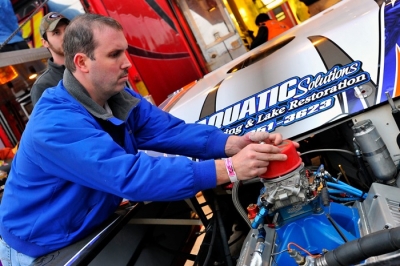 BARBERVILLE, Fla. — World of Outlaws Late Model Series regular Shane Clanton was credited with a pair of last-place finishes at Volusia Speedway Park — 29th on Thursday, 30th on Saturday — but not as a result of any bad racing luck at the DIRTcar Nationals by UNOH. | Complete Volusia coverage

Clanton, 34, of Locust Grove, Ga., traveled to the half-mile knowing his name would appear at the end of each evening's finishing order. Still recovering from a serious strep infection that materialized after he cut his left thumb in his team's race shop and forced him to spend a week in the hospital, Clanton had no choice but to simply enter each event and use emergency provisionals to gain entry to the features for points-chasing purposes.

It was a tough situation for Clanton, who could do nothing more than slowly circle the track during the pace laps in car of RSD Enterprises teammate Tony Knowles and quietly drive into the pits as the race began.

He was unable to race competitively because a PICC line remained in his left arm so he could receive IV bags filled with powerful antibiotics every eight hours in order to rid his bloodstream of the strep bacteria that had spread from his infected thumb.

"It's no fun being here and not racing," said Clanton, who will have to make an unprecedented rally to win the 2010 WoO title after leaving Volusia tied for 29th in the points standings, 112 points behind leader Brady Smith. "I wanted to step on the gas when I was out there, but I knew I couldn't."

Clanton said doctors hope to remove the PICC line from his arm next week if his recovery progresses on schedule.

Smith puts it all together

Before the start of Saturday night's WoO event at Volusia Speedway Park, Brady Smith stood by an Arizona Sports Shirts merchandise trailer behind the track's grandstand and talked about his winless 2009 season on the World of Outlaws Late Model Series and his hopes of ending the dry spell in 2010.

Several hours later, Smith's frustrating pursuit of his first checkered flag as a WoO regular was over. He dominated the tour's 50-lapper, rolling to a victory that clearly showed he's ready to be a title contender in his second series campaign on the road.

"We finally put a whole night together," said Smith, who scored three runner-up finishes (and lost one sure-fire win to a flat tire on the last lap) in 2009. "We swept the night — fast time, won our heat and won the feature. We had the Bloomquist car dialed in all night.

"Last year it seemed like we would qualify well and then not heat-race well, or not qualify well and then heat-race OK and start at the back of the feature. You have to be consistent all night if you want to race races against this kind of competition, so we sat and talked over the winter and got ourselves focused on putting whole nights together.

"That's something we did here the last two nights," added Smith, who won a heat and finished third in the season opener Thursday. "We qualified well enough to start on the front row of our heat both nights, and we were able to win both heats. That put us up front in the feature and we took advantage of it."

One year ago, of course, Smith got off to a disappointing start in the WoO lidlifter at Volusia, failing to qualify for Thursday's feature after a heat-race tangle sent him into the frontstretch wall. He rallied to finish second in the Saturday event, but he still left Florida in a major hole — 19th in the points standings, 71 points behind the leader — and never climbed higher than sixth in the rankings before settling for an eighth-place finish.

Now Smith, 32, of Solon Springs, Wis., is the WoO points leader for the first time in his career, and the possibilities for 2010 seem endless.

"It's pretty early to start thinking about points, but after the way we started out here last year it's a lot better to come out on top," said Smith, who sported a new sponsor, Michaletz Trucking of Owatonna, Minn., on his car's quarterpanels. "We'll just take it and keep working."

Steve Francis has some catching up to do in the WoO points standings after a 28th-place finish in Saturday's event at Volusia ended what he termed a "frustrating" season-opening trip to Georgia-Florida Speedweeks.

Back driving his own equipment after spending the last two seasons with Maryland car owner Dale Beitler, Francis managed just one top-five finish in 10 starts at three tracks in Georgia and Florida. His highlight was a fifth-place run (from the 19th starting spot) in Thursday's WoO feature at Volusia.

"This was not necessarily what we wanted to start with," said Francis, who parked his under-performing new Rocket car after a subpar UMP-sanctioned outing Wednesday night at Volusia and brought out a Rocket that he prepared for NASCAR star Ryan Newman's limited Dirt Late Model appearances last year. "Everybody worked hard, but sometimes things go right and sometimes they go wrong — and everything that could go wrong did go wrong this week. That's why they call it racing."

After a busted oil-pump belt eliminated Francis just three laps into Saturday's race, he headed out the pit gate mired in 15th in the points standings, 60 points behind leader Brady Smith.

"We'll go back and regroup," said Francis, who will marry Amanda Ferrell on Feb. 27. "I've left here in worse shape than this before."