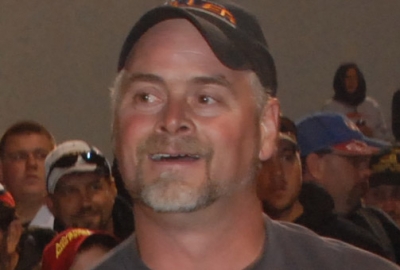 When Mike Countryman was announced as the winner of the 2009 World of Outlaws Late Model Series Integra Shocks Crew Chief of the Year honor during the tour's awards banquet last November, he felt no immediate rush of joy. In fact, Countryman didn't even realize he had been summoned to the stage. He's gone by the nickname Smoke for so long, hearing his given name doesn't even make him turn his head anymore.

"After (WoO announcer) Rick (Eshelman) said 'Mike Countryman,' it took me a couple seconds to figure out who he was talking about," recalled Countryman, who works for big-block modified-turned-Outlaw-star Tim Fuller of Watertown, N.Y. "I just sat there. Kelly (Countryman's wife of 28 years) had to nudge me a little bit and say, 'You won!' "

Countryman, 47, of Antwerp, N.Y., has been traveling the WoO alongside Fuller since 2007, and the awards-banquet presentation was likely the first time that most of the friends he's made in the full-fendered world have publicly heard him referred to by his real name.

"Nobody calls me Mike," said Countryman. "My uncle's nickname was Smokey and I looked more like him than my dad, so everybody started calling me Smoke when I was a kid and it just stuck.

"It's kind of funny," he added with a smile. "A couple guys (fellow crewmen) came up to me after the banquet and said, 'Man, I voted for Smoke (in the Crew Chief of the Year balloting), not this guy named Mike Countryman."

Countryman — uh, Smoke — is set to kick off another WoO campaign as Fuller's right-hand man Thursday night at Volusia Speedway Park. The half-mile track outside Daytona Beach hosts the season-opening WoO events on Feb. 11 and 13.

Anyone who stops by Fuller's Gypsum Express No. 19 hauler will see one of the hardest-working men on tour in Countryman, who has developed as an ace dirt Late Model mechanic just as Fuller has grown into a national star. Both were new to the division when they embarked on the WoO in 2007, and in three short years, Fuller has gone from the tour's Rookie of the Year to a bona fide championship threat who in 2009 won seven times (including a record-tying four-race win streak) and finished a career-high fourth in the points standings.

Countryman has known Fuller, 42, for more than two decades. They met in the late '80s, when Fuller, then a young competitor in the Pure Stock class at tracks across New York's North Country, parked next to the Late Model team Countryman had been helping since 1978. Shortly thereafter Niles Busler, the area Late Model standout whom Countryman assisted, was forced to stop racing after being diagnosed with Lou Gehrig's Disease, and Countryman began lending a hand to Fuller at the local tracks.

"In '89 I started helping Tim on his sportsman," said Countryman, who got his first taste of North Country racing as a youngster when his three uncles raced Late Models (with, ironically, Fuller's father as one of their competitors). "When he went modified racing, I built him his first body."

Fuller won the Mr. DIRTcar 358 modified championship in 1993 with Countryman on his crew. Countryman remained with Fuller until midway through the 1994 season — shortly before Fuller quit his job working in a zinc mine and became a full-time racer — when he decided to back away from racing to resume a career as a dairy farmer that he had previously pursued during the '80s.

Countryman stayed in touch with racing, but he didn't see himself making the sport his occupation. Then Fuller called him before the start of the 2006 season and asked him to come out of his wrench-twisting retirement. Countryman agreed, leaving his position as a farm-equipment mechanic to hit the road with Fuller.

"I've always liked working on race cars," said Countryman, who raises heifers for sale to supplement his income from racing. "I thought, Why not give it a shot? I'd probably regret it if I didn't do it.

"I like working with Tim, I like the travel, and I'm used to long hours from being a farmer for so many years. I love the job. I'm having fun."

Countryman's Fun Meter pegged out last summer when he witnessed Fuller go on one of the most memorable runs in WoO history. Fuller scored his first win of 2009 on July 25 at Sharon Speedway in Hartford, Ohio, and then ripped off three more wins in a row and seven victories over an 11-race span, stamping himself as a true driver to beat anywhere the tour visits.

"I've never experienced anything like that before," Countryman said of Fuller's coming-out party. "You're racing with the best. It's amazing to beat these guys once, and we did it four races in a row. It made me feel like a kid on Christmas morning again."

The explosion also raised Countryman's profile in the pit area. His role in turning Fuller into a victory lane regular was the key factor in earning him the Integra Shocks Crew Chief of the Year award, which was determined by a vote of the tour's chief mechanics and officials.

"It makes me feel real good to know I have the respect of the other guys on the series," said Countryman, who earned $1,000 and received a specially-designed wrench-shaped trophy from Integra Shocks rep Brian Daugherty. "I try to get along with everybody and help anybody who comes over to ask me something. Tim and I came into this Late Model deal not knowing anything, but we got a lot of help from a lot of people to get where we're at now."

Countryman is hoping that the 2010 season will bring even greater success. Along with team tire-man Barry Knapp — a talented 24-year-old crewman who joined Fuller's operation for the 2009 campaign and provided a huge boost — Fuller and Countryman spent the off-season reworking their powerful '09 Rocket car and assembling a new machine that's essentially a twin to it. Powering the machines this season will be motors from a new in-house engine program organized by Fuller's Gypsum Express team owner John Wight, who decided to purchase engine-building equipment and hire Kevlar's Kevin Lamphear to head construction of powerplants race teams.

"We're ready as we can be for the season," said Countryman, who has two children, Nichole, 25, and Paul, 21. "We didn't get off to the best start last year (Fuller's first top-five came in the 10th race), so we're trying to focus on getting going a little faster this year. If we can do that, we should be OK."