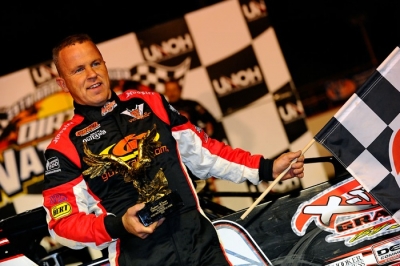 BARBERVILLE, Fla. (Feb. 8) — After three runner-up finishes last year at Volusia Speedway Park, Darrell Lanigan was hoping to get this year's DIRTcar Nationals by UNOH started with a bang. The 39-year-old driver from Union, Ky., did just that, earned $7,000 for a UMP-sanctioned victory at the D-shaped half-mile track. | Slideshow | Complete Volusia coverage

"I think we ran three or four seconds last year," said Lanigan, whose last Volusia victory came Feb. 16, 2007. "To get a win the first night out, that makes me pretty happy."

Lanigan overcame his a third-row starting spot, a near-disaster on the frontstretch while battling Brian Birkhofer for the lead and a lapped car that held him up in his low groove during the race's late stages. Lanigan's first outing of the year ended with a victory for a brand-new Rocket Chassis.

"Everything just went perfect. We had a good run in the heat race, started up at the front. We tried a couple of little things on the chassis, and it worked out pretty good, so we're happy with the night," said Lanigan who was up to second after six laps and tracked down Birkhofer midway through the race. "There at the beginning, (Birkhofer) pulled out a little bit, and I was like, 'Man, he's going to be tough.' But once I got into second, I could run my own line there and run him down then."

The lower-running Lanigan edged ahead to lead laps 14 and 15, but the higher-running Birkhofer switched grooves heading into turn one and Lanigan had to jump on the binders to avoid spinning. Birkhofer led the next three laps before Lanigan took command on lap 19 for a lead he'd never give up.

The slower car of Tommy Kerr held up Lanigan in the lower groove in the final laps, but Lanigan finally worked his way around and stayed just ahead of seventh-starting Jimmy Owens of Newport, Tenn., who made a late high-side charge to get to second.

Owens, the fastest qualifier among a Georgia-Florida Speedweeks best 67 entries, was second followed by Birkhofer and 17th-starting Billy Moyer of Batesville, Ark. Dan Schlieper of Sullivan, Wis., ended up fifth.

"I just tried a couple of banzai moves on the high side to see how that turned out, and we were able to gain on him," Owens said. "I felt like we might've even had a little bit better car, but I guess if we would've had a better car we would've won."

Birkhofer said he and his crew made the wrong chassis adjustments in the feature, going the opposite way in trying to improve the No. 15B's handling. Still, he led 15 laps, including 12 of the first 13.

"We just didn't make the right adjustments for the racetrack. That's the cool thing about it. We get six nights here, we'll learn some stuff about the car, and I firmly believe we'll be in the hunt the rest of the week. We've just gotta keep plugging away.

"Hey, third the first night out. I ain't driven a stock car in a few months, so I'm pretty happy with it."

As for his mid-race groove switch, Birkhofer said he didn't realize Lanigan was there.

"I didn't see him," the Muscatine, Iowa, driver said. I've seen that guy do the same thing. Everybody does it. If he owe's me one, I guess he owes me one."

Notes: Lanigan's Rocket Chassis has a Cornett powerplant and sponsorship from gottarace.com, Xtreme Graphics and Arizona Sport Shirts. ... Lanigan was third or better four times in six Volusia starts last February. ... Polesitter Jack Sullivan led the second lap but was out of the top five halfway through the race. ... Earl Pearson Jr. rallied from 20th to finish sixth. ... Twenty-three of 24 starters were running at the finish with Ross Camponovo dropping out after 22 laps. ... Tyler Landers, who scratched from Late Model action after heat races, earned $5,000 for capturing the preceding UMP modified feature.

Outside front-row starter Boom Briggs, who dropped back early, edged past polesitter Clint Smith in the final laps to win the third consy. Smith transferred with the second spot while Randy Korte was third.

Outside front-row starter stole the lead from polesitter Brady Smith on a lap-three restart and held on the rest of the way as they both transferred to the main event. Pearson's teammate Brad Neat was third ahead of Eddie Carrier Jr. and Bub McCool, who worked his way into third early. The race's lone caution appeared on the third lap when third-starting Ricky Weiss spun in turn four and Russ King's machine went briefly airborne after climbing the nosepiece of the Weiss No. 7. Both cars were eliminated.

Polesitter Jason Feger, running the high side most of the way, cruised to a 10-lap victory in the first consy. Fourth-running Dale McDowell ran low most of the way to finish a half-straight back in second and the final transfer spot. Seventh-starting Dan Stone rallied to third but never contended for a transfer spot.

Surprising Mississippi teen Ross Camponovo won his first-ever heat race, racing to victory from outside the front row. The high-running Camponovo survived a brush of contact with Eric Jacobsen exiting turn four early in the race and pulled away for the victory. The third-starting Jacobsen held on to second while Tommy Kerr got the third and final transfer spot after taking the position from polesitter Boom Briggs. Tyler Reddick, who pulled onto the track for the previous heat race but was sent to the infield pits, never showed up.

Fifth-starting Darrell Lanigan overtook early leader Clint Smith and raced to an eight-lap victory. Smith fell to fourth a few laps later as a high-running Tyler Ivey and low-running Billy Moyer flew past. Ivey held the second spot until Moyer slipped under him heading to the checkered flag. Ivey got the third and final transfer spot with Smith fourth. Will Vaught, the fastest qualifier in the group, started fourth but got too high in turn four on the first lap and never recovered. Wendell Wallace pulled off on the second lap.

Outside front-row starter Jordan Bland fought off a late charge from fourth-starting Tim McCreadie to capture the caution-free prelim. Bland cruised early before McCreadie tracked him down, briefly pulling ahead on the backstretch of the final lap before Bland edged back ahead. Fifth-starting Steve Francis slipped under Earl Pearson Jr. in turn three on the final lap to get the final transfer spot.

Outside front-row starter Vic Coffey outran fourth-running Dennis Erb Jr. for an eight-lap victory with third-starting Josh Richards in third. Polesitter Brady Smith struggled the first few laps and slipped back to fourth, where he finished just ahead of Ricky Weiss in the caution-free prelim.

Polesitter Brian Birkhofer outdueled fellow front-row starter Dan Schlieper on the first lap and cruised to an eight-lap victory in his first event at Volusia in three years. Birkhofer finished more than a straightaway ahead of the field. Schlieper had his hands full holding onto the second spot, but fought off Tim Fuller, who got the third and final transfer spot. Kyle Berck, fast qualifier in the group, had to start on the tail because he switched to a backup car and ended up seventh.

Polesitter Jack Sullivan led all the way for an eight-lap victory while overall fast qualifier Jimmy Owens ran second. Rick Eckert was a distant third for the final transfer spot while outside front-row starter Jason Feger ended up fourth. John Blankenship had to give up a front row starting spot after breaking a driveshaft and finished fifth after starting near the tail. Brandon Kinzer scratched because he hadn't arrived from the airport after his scheduled flight to Florida was delayed.

Jimmy Owens of Newport, Tenn., was the fastest of 67 entrants Monday for the Late Model opener at Volusia Speedway Park's DIRTcar Nationals by UNOH. Owens blazed to a lap of 15.962 seconds on the D-shaped half-mile.

With a four-car inversion in the heat races, Owens is scheduled to start outside the second row in his heat. Heat race polesitters unofficially according to group qualifying are Jack Sullivan of Greenbrier, Ark.; Brian Birkhofer of Muscatine, Iowa; Brady Smith of Solon Springs, Wis.; Brad Neat of Dunnville, Ky.; Tyler Ivey of Tallahassee, Fla.; and Boom Briggs of Bear Lake, Pa.

The top three finishers from each of six heat races advance to the main event with consolation races filling the rest of the field for the 30-lap main event. The UMP-sanctioned feature pays $7,000 to the winner.

Kyle Berck, the fastest qualifier in the second group, burned a piston in time trials and was forced to switch to a backup car, dropping him to the tail of a heat race. ... While car counts have been down about 20 cars for the first two rounds of Georgia-Florida Speedweeks, Volusia hasn't suffered the same fate. Monday's opener drew 67 entries, hitting last year's average at the half-mile D-shaped track and just one fewer than last year's opener. ... UMP modifieds are also in action Monday for their biggest event of the DIRTcar Nationals, a $5,000-to-win event. ... Action continues with $7,000-to-win UMP Late Model features on Tuesday and Wednesday. The World of Outlaws Late Model Series sanctions $10,000-to-win events on Thursday and Saturday and UMP sanctions a $10,000-to-win event on Friday.