Up on the wheel, Real Deal wins East Bay finale 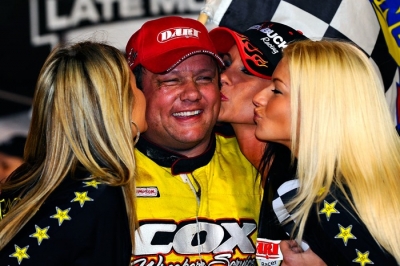 "When I fell back to fifth, I thought, 'I might as well hang it out now.' I didn't have nothing to lose running fifth," O'Neal said. "It felt good."

So good that, when Bloomquist botched a lap-39 restart, O'Neal was ready to capitalize, outdueling Dan Schlieper to take a lead he'd never give up. His secret? "Just run the wheels off it" as he had in his previous 11 Winternationals victories.

"It seemed like the harder I ran, the less mistakes I made, so I just stayed up on the wheel," O'Neal said.

O'Neal's hard-charging change of heart, along with a clear racetrack, carried him to a $12,000 victory at the third-mile oval near Tampa. He notched his 12th career Winternationals victory and 13th Lucas Oil Series victory of his career.

"Aww, it feels great to win here, I'm telling you. We just kept digging. ... Don't never give up. No matter how far you fall back," said O'Neal, whose victory in a MasterSbilt Race Car marked his first East Bay victory with four-bar rear suspension. "When I fell back to fifth, I was really kicking myself in the butt, and I knew if I just kept my head on ... we could get back up there."

The sixth-starting Schlieper, of Sullivan, Wis., finished second in the nightcap of a Winternationals doubleheader set up by a Friday rainout. Bloomquist, who won Saturday afternoon's feature and was aiming for a career-best third Winternationals victory of the week, settled for third. Dennis Erb Jr. of Carpentersville, Ill., was fourth and wrapped up the $5,000 Dart Winternationals points title while Jimmy Mars of Menomonie, Wis., rounded out the top five.

Bloomquist started outside the front row and was a straightaway ahead after 10 laps while O'Neal's roller-coaster ride was just beginning. O'Neal took the second spot from polesitter Chris Wall of Holden, La., but on lap 11 nearly lost control exiting turn two, forcing Wall to take evasive action and leaving a scramble of cars in his wake. O'Neal stayed in second the next 20 laps, but shortly after a lap-29 caution, he lost control again exiting turn two and fell behind Bloomquist, Schlieper, Ray Cook and Mars.

"On that one restart, I must've wrecked three times coming off of (turn) two, and I was lucky to survive it," O'Neal said. But in between his miscues, O'Neal felt his No. 71 was capable of running with Bloomquist, who appeared as strong as he had in leading 118 of 120 feature laps in three previous starts. "Early in the race there on that one long green-flag run, I knew we could run with him."

Bloomquist smoothly pulled away on several restarts, but after Brady Smith lost a wheel on the frontstretch to trigger a lap-39 accident that brought out a red flag, Bloomquist jumped the cushion in turns one and two, allowing O'Neal and Schlieper to sneak past.

"He'd been pretty flawless all week," O'Neal said, "so it was time he made a mistake."

Bloomquist, who doubled his Winternationals victory total with two victories during the week, said his car never felt the same again.

"After having those cautions and that red flag, I don't know whether the tires wouldn't relight — we were a compound harder than they were on tires — and it just didn't go," said the Hall of Fame driver from Mooresburg, Tenn. "Also, I don't know, but I'm going to have to look at the car real good. The car started bouncing around a lot more. I don't know whether we might've had something happen with a shock, or something, but it just wasn't like it was in the early stages. That's the way it goes."

O'Neal didn't let the opportunity pass, and he made sure he was the one to grab the lead instead of Schlieper. He slid in front of Schlieper exiting turn four and set sail.

"I think Schlieper was on the outside of me ... and I knew I better take that lead down there when I could," O'Neal said. "After that it was just trying not to make any mistakes."

Employing his "drive the wheels off it" mentality, O'Neal led the rest of the way, never seriously challenged by either Schlieper or Bloomquist, who regained the second spot from Schlieper from laps 45-63.

O'Neal was gratified to outrun Bloomquist, who hasn't been worse than third in seven Georgia-Florida Speedweeks starts. "Just to outran that guy here says we had a pretty good hot rod tonight," he said.

"I'll take second all day long," he said. "I put on soft tires. I was kind of just rolling around there the first part of the race and just conserving my tires. Once I saw a hole to shoot through, I shot through it. ... It was a long week here, it was a doubleheader today. I'm just glad it's over."

The finale was slowed nine times, most seriously for Smith's frontstretch wreck that collected Ricky Weiss and sent other drivers scrambling for cover.

Jimmy Owens and Earl Pearson Jr. took provisional starting spots based on '09 series points. Dillan White got the Dart Fast Pass for the fastest qualifier not already in the field. Eric Jacobsen took an emergency provisional. The last spot goes to the Strawberry Dash winner in a race among non-qualifiers. The scheduled Strawberry Dash lineup: Jason McBride, Dale McDowell, Travis Varnadore, Tim Isenberg, Tim Dohm, Billy Moyer and Steve Casebolt. However, only four drivers showed up: Varnadore, Isenberg, Dohm and Casebolt. Isenberg was leading the third lap when he spun in turn three, collecting Dohm and Varnadore and giving the fourth-running Casebolt the lead. Isenberg departed with a flat tire and Varnadore pulled out during a caution for debris. Casebolt outran Dohm to win.

Fourth-starting Dan Stone overtook race-long leader and polesitter Eric Wells in the race's waning moments for a victory in the final consolation of the week. Wells settled for second in a race Tim Fuller got the third and final transfer spot, a position several drivers held at different times. Tim Isenberg was running third when he was forced to the pits with a flat right rear tire before a lap-nine restart, handing the spot to Fuller. Bub McCool stole the position from Fuller a few laps later, but Fuller made a last-lap pass to regain it. Polesitter Jason McBride ran second early but couldn't keep his car below the cushion as he faded from contention. Four cautions slowed the action. Third-starting Brad Neat spun exiting turn two on the second lap, collecting Tyler Reddick and Mike Collins. Tim Isenberg was briefly airborne when he rolled over Neat's nose, but he continued on relatively unscathed. Neat's car required two wreckers to haul it to the infield. Danny Mitchell spun alone in turn four on the ninth lap, Russ King slowed with a lap-10 flat and Mike Collins spun in turn four on a late restart.

Polesitter Matt Miller survived a near-spin in turn four on the fourth lap and raced to a 12-lap victory over Steve Francis. Shannon Babb was a close third for the final transfer spot. Scheduled polesitter Jimmy Owens skipped the race and is in line for a series provisional, as is early dropout Earl Pearson Jr.

Outside front-row starter Justin Rattliff got the jump on polesitter Jimmy Mars, survived an early three-wide battle in turn four and raced to a victory in the final heat. Brady Smith dropped Mars to third midway through the race while seventh-starting Mark Andersen rallied for the fourth and final transfer spot, fighting off Eric Wells over the last few laps. The lone caution appeared on the fourth lap when Tommy Kerr stopped in turn four.

Polesitter Scott Bloomquist, looking for his third feature victory of the week, held off a late challenge from Dan Schlieper to win the 10-lap prelim. Sixth-starting Mike Marlar got up to fourth early and then took the third spot from Ricky Weiss, where he finished. Weiss got the fourth and final transfer spot in a race slowed by a single caution. A lap-three yellow appeared when Tim Isenberg lost control in turn three and spun along with Jordan Bland as they battled for fourth.

Outside front-row starter Don O'Neal's lap-seven slide job in turn four dropped polesitter and race-long leader John Blankenship to second, and O'Neal cruised the rest of the way. Rick Eckert finished third while third-starting Jason Feger, who briefly slipped back to fifth, for the fourth and final transfer spot. Fifth-starting Dillan White, trying to start his sixth straight East Bay feature after entering the week without a career start, got past Feger early but lost it when he got too high exiting turn two.

In a stacked heat, new track record-holder and polesitter Chris Wall slipped under Ray Cook when Cook jumped the turn-four cushion on the third lap, and led the rest of the 10-lapper. Cook, who jumped to the lead from outside the front row, settled for second while Dart Winternationals points leader Dennis Erb Jr. was third. Tim McCreadie got the fourth and final transfer spot in a heat race where heavy-hitters Jimmy Owens, Matt Miller, Shannon Babb and Earl Pearson Jr. failed to advance. Thursday's winner Pearson, who started fifth, pulled to the pits during a second-lap caution for a slowing Shan Smith.

Wall spun a "1" on the inversion wheel, meaning the four heat races will start straight up. Besides Wall, heat-race polesitters will be John Blankenship of Williamson, W.Va., Scott Bloomquist of Mooresburg, Tenn., and Jimmy Mars of Menomonie, Wis.

The top four finishers from each of four heat races will transfer to the main event. Three drivers apiece from each of two consolations will transfer. Also added to the field will be two series provisionals along with the winner of the Strawberry Dash (a race for non-qualifiers) and the driver earning the Dart Fast Pass, the fastest qualifier not already in the race. The evening feature pays $12,000 to the winner.

Bloomquist, the reigning Lucas Oil champion, won Saturday's afternoon feature, the makeup of a $10,000-to-win event rained out on Friday. Bloomquist, who has doubled his career victories total at East Bay, was the second fastest overall qualifier.

Dale McDowell got a single lap in qualifying because he missed his spot in the qualifying order while his team repaired a broken driveshaft. ... John Blankenship's solid qualifying time gives him a good opportunity to improve on his week-best 15th-place finish. ... Lee Thomason lost a right-rear wheel on the frontstretch during hot laps that preceded evening qualifying.