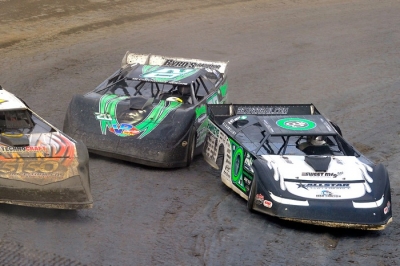 GIBSONTON, Fla. (Feb. 6) — Scott Bloomquist had a 17-year stretch between his first and second victories at East Bay Raceway Park. On Saturday afternoon, the Hall of Famer from Mooresburg, Tenn., made it just a four-day stretch between victories No. 3 and 4. Notebook | Slideshow | Complete East Bay coverage

The polesitting Bloomquist led all 50 daytime laps of the Lucas Oil Late Model Dirt Series-sanctioned Dart Winternationals feature at the third-mile oval near Tampa, the first race of a Saturday doubleheader caused by a Friday rainout.

Outside front-row starter Jimmy Owens of Newport, Tenn., pressured Bloomquist, his chassis builder, just before the race's midpoint, but couldn't summon a serious challenge the rest of the way as Bloomquist collected $10,000, adding it to the $5,000 he won for Tuesday's victory.

"We're really had our (butt) handed to us a lot, so it feels good," said Bloomquist, who is enjoying his best-ever Winternationals by leading all but two laps of the three features he's competed in. "We didn't know what the track was going to do, and we just hoped we went with the right tires and just stayed in the bottom. The racetrack was actually a lot more racy than I thought it was going to be today. It's a testament to the good preparation. There's not too many places you can have a race in the daytime."

Bloomquist was alone in front most of the race, but Owens crept close as they worked the slower car of Michael Walker just before the race's midpoint. With Walker in the low groove and Bloomquist right behind him, Owens tried the high side into turn three. But Walker moved up, too, and the runner-up didn't have enough to complete the pass.

"As soon as I showed him my nose there, I knew it was over. He needed to move down the track just a little bit more, and I just goofed up," said Owens, who is still looking for his first career Late Model Winternationals victory. "We had a good car and the longer greens we were able to run him back down. He was able to fire off a lot quicker than we were. It looked like he was a little tight through the center there, and once he figured out how to get through the middle of the corner without pushing, he was able to gain a little bit on us."

The race was slowed by three cautions, none for serious incidents. Jimmy Mars slowed to a stop exiting turn two on the ninth lap and Austin Reddick spun near the same spot a lap later. A lapped Michael Walker stopped on the track on lap 29.

Notes: Bloomquist's self-designed car is powered by a Vic Hill Racing Engine and sponsored by Miller Bros. Coal, Allstar Performance and Hawkeye Trucking. ... Bloomquist's previous East Bay victories came in 1990 and '07. ... All the top-five finishers except fourth-place Billy Moyer piloted Bloomquist Race Cars. ... Jimmy Mars, the first driver out of the race, planned to go to a backup car for Saturday night's race. ... Because of time constraints, the Strawberry Dash for non-qualifiers' race was scrapped and Michael Walker's name was drawn as the final starter. ... Hot laps will begin for the Saturday evening event at 5:45 p.m. ... The $5,000-to-win Dart Winternationals standings are: Dennis Erb Jr. (995), Don O'Neal (905), Matt Miller (900), Shannon Babb (885) and Billy Moyer (880). Drivers must compete in all six events to be eligible.

John Blankenship outdueled fellow front row starter Brady Smith throughout the race for the victory, and Smith settled for second. The battle for third was a good one late in the race with third-starting Mike Marlar and fifth-starting Dan Stone in a groove-swapping duel. Stone was alongside Marlar a few times but fell back on the final lap. Lee Thomason's turn-four spin on the second lap drew the race's lone caution flag.

Outside front-row starter Tim Fuller outdueled polesitter Jimmy Mars over the first lap and raced to a 12-lap victory. Mars, in the No. 25 Ernie Davis-owned car normally driven by Josh Richards, was second with fourth-starting Tyler Reddick finishing in the third and final transfer spot. Jim O'Hara spun in turn four on the seventh lap to draw the race's lone caution. Dillan White, who was fifth, should be in line for the Dart Fast Pass, a fast-qualifying provisional.

While outside front-row starters have seemed to have the advantage on starts most of the week, polesitters got the jump in every heat Saturday afternoon in the first daytime racing conditions. ... However, after the races got rolling, some drivers were able to make the outside groove work, including Dennis Erb Jr., who went from fourth to second around Billy Moyer and Steve Francis in the first heat. ... Erb leads the Dart Winternationals points and has a chance to extend that margin on Matt Miller, who entered the race five points behind Erb but will start sixth in a consolation race. ... Three Bloomquist Race Cars won heat races.

Polesitter Dan Schlieper cruised to victory in the final heat as the inside-row starters took the top three spots early in the race. Third-starting Austin Hubbard ran second all the way and fifth-starting Tim McCreadie was third virtually the entire race, fighting off a lap-three challenge from outside front-row starter Chris Wall. Wall got the fourth and final transfer spot whiel John Blankenship was a distant fifth in the caution-free prelim.

Catching a break when polesitter Tim Dohm exited just past the halfway point, Jimmy Owens fought off Eric Jacobsen for a 10-lap victory. Jacobsen was a close second while fifth-starting Don O'Neal was further back in third. Earl Pearson Jr. ran third early, fell back to fifth and ended up fourth. Dohm led the first six laps, but he got into the inside berm in turn four and his nosepiece got peeled under the car; he limped to the pits after drawing a caution.

Polesitter Shannon Babb raced to a victory over fellow front-row starter Rick Eckert to earn the third starting position in the main event. Third-starting Jason Feger ran third all the way while fifth-starting Justin Rattliff stealing the fourth and final transfer spot from Tim Fuller midway through the race. Fourth-starting Dillan White, a 17-year-old Kentuckian trying for his fifth feature start of the week, got a poor start and then slipped high again on the final restart. Two cautions slowed the action. Tenth-starting Brad Neat got the worst end of a three-wide battle into turn three on the fourth lap and spun to draw the race's lone yellow flag; Chad Hollenbeck got lightly into the turn-three fence on the seventh lap and was towed away.

Polesitter Scott Bloomquist got the jump on fast qualifier Steve Francis and cruised to an easy victory. Fourth-starting Dennis Erb Jr., the Winternationals points leader, made the high groove work and grabbed the second spot on the eighth lap while Francis settled for third. Billy Moyer got the fourth and final transfer spot while Jimmy Mars, making a late-race bid to steal a spot from Moyer, got briefly into the backstretch wall and finished fifth. A yellow (and then red) flag slowed the action on the second lap. Eighth-starting Brandon Thirlby's No. m14 took a hard shot with his right rear into the turn-one fence, spinning his new MasterSbilt around violently with debris flying off; he remained in the heavily damaged car a few minutes before climbing into an ambulance. The 22-year-old powerboat racer had his bell run and complained of a sore neck.

Steve Francis of Ashland, Ky., topped 49 qualifiers on Saturday afternoon at East Bay Raceway Park in the first round of a Dart Winternationals doubleheader. Francis posted a lap of 14.403 seconds at the third-mile oval in the makeup of Friday's rainout. "We've been off a little bit," said Francis, who is fielding his own equipment this season. "We hurt our favorite motor in our first race over here."

Francis spun a "2" on the inversion, meaning he'll start outside the front row of the first heat race according to a two-car inversion. That'll put Scott Bloomquist, Shannon Babb, Tim Dohm and Dan Schlieper will be on pole positions for each of the four heats, which will likely begin about 2 p.m.

The top four finishers from each of four heat races will transfer to the main event. Three drivers apiece from each of two consolations will transfer. Also added to the field will be two series provisionals along with the winner of the Strawberry Dash (a race for non-qualifiers) and the driver earning the Dart Fast Pass, the fastest qualifier not already in the race. The afternoon feature pays $10,000 to the winner.

The nightcap of the doubleheader and sixth event of the week pays $12,000 to the winner with hot laps scheduled for 5 p.m. after the track surface is reworked.

Saturday's doubleheader marks the second straight year East Bay has run two shows in one day. Last year's twinbill came on Friday and Josh Richards won both races (he's not in action today because he's in Daytona for today's ARCA race; Jimmy Mars is driving the No. 25 normally driven by Richards). ... The previous doubleheader before '09 was Feb. 9, 2002. ... Although most people don't think of daytime racing having good track conditions, Dan Schlieper lowered the East Bay Late Model track record in the first round of last year's doubleheader with a lap of 14.136 seconds. The fastest laps were about a half-second off that this afternoon. ... What about three races in one day? Steve Casebolt wasn't interested. "Could we do three? I don't even want to do two," Casebolt wisecracked while preparing tires Saturday morning. "I barely want to do one." ... Pennsylvania driver Dan Stone, a regular Winternationals driver, is glad to be racing since he's enjoying warm Florida weather during the winter, even if it's two races in one day. "I'm glad we're not losing a show," Stone said. ... Two drivers in the pits skipped Saturday's day race, apparently with plans to run Saturday night: Bob Geiger of Laurel, Del., and Shan Smith of Dade City, Fla. (Smith didn't qualify, but later decided to tag the tail of a heat race. ... No newcomers are in the pits. ... Dillan White's No. 54 without sponsorshop all week but now has motorstats.com on his red car. ... Tim Isenberg of Marshfield, Wis., wasn't allowed to qualify and must start on the tail of a heat race because he showed up for qualifying with the wrong compound tire. ... Ricky Weiss of Winnipeg, Manitoba, got into the backstretch wall on his first lap, but didn't suffer enough damage to prevent him for a second lap. ... Schlieper got into the frontstretch wall just before concluding his second lap. ... Chris Wall got into the backstretch wall on his second lap, suffering a little damage to the rear of his No. 71. ... Because of the day-night doubleheader, DirtonDirt.com's Saturday video coverage won't include the Speedweeks Minute or RaceDay.