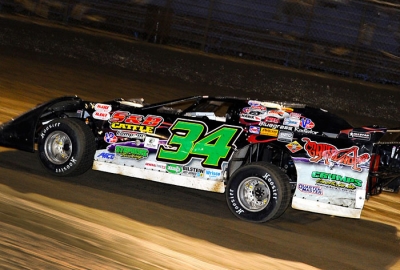 GIBSONTON, Fla. (Feb. 1) — Most drivers head to Florida Speedweeks with brand new equipment or a trusty car from the previous season. Mike Marlar came to East Bay Raceway Park with a race car that hadn't hit a racetrack in a full year. He didn't let that stop him from nabbing a victory in the Dart Winternationals opener. | Slideshow | Complete East Bay coverage

Unloading the Stephens Motorsports No. 34 that hadn't been driven since last season's Winternationals finale, Marlar led all 30 laps of the Lucas Oil Late Model Dirt Series season opener for a $5,000 victory. After holding off polesitter Tim McCreadie's frequent challenges, Marlar said he was confident in the aging Rayburn Race Car after crew members knocked the cobwebs off at his Winfield, Tenn., shop.

"I wouldn't be here if I wasn't," said Marlar, who notched his second career Lucas Oil victory and first at East Bay. "Actually, sometimes the older stuff is a little better, even."

The car sat idle in Flemingsburg, Ky., for nearly 12 months before Marlar and his crew began making plans for their 2010 Speedweeks effort.

"They actually just took it home (last February), hadn't washed it or anything. They rolled it out of their trailer, into their shop, drained the water out and it sat for almost 365 days, and they brought it back down to me two weeks ago," Marlar said. "My little brother Skylar and Josh and these guys beat the dust off of it and washed it a little bit, and we were ready again."

"He's up there looking down on us and I'm glad we could win one," Marlar said in victory lane.

McCreadie, who started on the pole on a night when outside front-row starters repeatedly got the jump in prelims, pulled alongside Marlar a few times exiting the corners but couldn't find a way past in settling for second. Ray Cook of Brasstown, N.C., who has struggled at East Bay most of his career, nabbed third and Tim Dohm of Cross Lanes, W.Va., rallied from 10th to fourth in his Seymour Motorsports No. 17. Josh Richards, a three-time Winternationals winner last season, was fifth on a night when rain following time trials delayed action for two hours.

McCreadie was glad to show improvement after three mid-pack runs at Golden Isles Speedway near Brunswick, Ga., last week, but he was denied his second East Bay victory.

"He drove a real good race. He made two little mistakes and it was just so narrow I couldn't get up there to try and slide him," said McCreadie, who missed '09 action at East Bay recovering from injuries sustained at midget racing's Chili Bowl. "From where we were last week to where we are today, it's a breath of fresh air, that's for sure."

Marlar's flag-to-flag victory wasn't without a little tension. Besides the challenges of McCreadie, brake problems forced Marlar to do a little creative pedal-stomping.

"I got a little mud hung in my wheel, and it was vibrating. When that happens, it causes your brakes — the calipers and pistons to go in — and you've gotta pump 'em before every corner. I was wide open and pumping the brake at the same time to get it to go through the corner.

"There was a couple of times I was glad to see a caution. It really got to vibrating and shaking my brake pedal. ... I just had to start chopping across the corner, sliding and spinning and trying to stay ahead."

The feature was slowed by three cautions, all for slowing cars (Jason Feger on lap three, Tyler Reddick on lap nine and then Justin Rattliff and Dan Stone on lap 21).

Action continues at East Bay on Tuesday with another $5,000-to-win feature, the second of six Lucas Oil events of the week.

Notes: Marlar's Rayburn has an Estes Automotive Engine and sponsorship from S&B Cattle. ... Marlar and fiancee Stacy Horstman have a Feb. 27 wedding date. ... Fourth-starting Matt Miller got too high in turn four on the first lap and dropped back to eighth in the early laps. .... Tyler Reddick briefly got into the inside berm in turn four on the sixth lap and fell back near the back of the pack before slowing to draw a lap-nine caution. ... Steve Shaver and Eric Wells both pulled to the infield midway through the race.

Billy Moyer got the provisional spot for the fastest qualifier not in the field. Because the late hour prevented the running of the Strawberry Dash for non-qualifiers, officials drew a name from the non-qualifiers and Justin Rattliff gets the last-row starting spot.

Polesitter Bub McCool outdueled fellow front-row starter Don O'Neal the first half of the race, pulling away when O'Neal got too high in turn three on the eighth lap. O'Neal settled for secon. Dan Schlieper, who survived a near-flip on the third lap when he got into the cushion hard between turns three and four, was third and Tim Isenberg got the final transfer spot. Travis Varnadore was a close fifth.

Matt Miller gave outside front-row starters a complete sweep of the heats by leading all 10 laps. Josh Richards rallied from his sixth starting spot to finish second after taking the spot from Tyler Reddick on the third lap. Reddick held on to finish third ahead of Steve Casebolt, the final transferring driver. Don O'Neal was just behind Casebolt in fifth, but smoke wafted from his No. 71 as he headed for the pits. In a twist of fate, Terry Casey and Richards got hung up exiting turn four — the same spot where Casey retalitated against Richards in last year's finale. This time, however, it was harmless as the second-running Casey had a flat left rear and slowed in front of the field as everyone tried to scramble past.

Becoming the third straight outside front-row starter to win, Mike Marlar raced to a 10-lap victory spiced by a frontstretch scramble on the sixth lap. Polesitter Eric Jacobsen nearly got sideways exiting turn four and Dale McDowell made contact, flattening McDowell's right-front tire and knocking him out of the race Jacobsen survived to finish second, pressuring Marlar late, while Tim Dohm moved up to third. Ninth-starting Bub McCool held the fourth spot in the final laps, but Dan Stone slipped under him in turns three and four for the final transfer spot. Austin Hubbard was running fourth when his car went up in smoke on the sixth lap; Chad Hollenbeck's car broke simultaneously with Hubbard's departure.

Inheriting a front-row spot when Billy Moyer scratched, Ray Cook raced to an easy 10-lap victory. Polesitter Dillan White struggled on the first lap but got rolling for a solid second-place finish. Jason Feger was third in his first-ever heat at East Bay and Steve Shaver, who nearly took second from White early, got the fourth and final transfer spot. White and Feger earned their first-ever feature starts at East Bay. Moyer was scheduled to start outside the front row, but his car lost fire before the green and he was pushed to the pits.

With the first action on the track after a rain delay, outside front-row starter Tim McCreadie got the jump on polesitter Chris Wall and raced to an easy 10-lap victory. Wall had his hands full with fourth-starting Kyle Berck and then Dennis Erb Jr., but held on for second. Erb was third and Berck got the fourth and final transfer spot. Shannon Babb pressured Berck late but was fifth and will start on the pole of a consolation race.

Chris Wall of Holden, La., topped 42 qualifiers Monday at East Bay Raceway Park in the first night of the Lucas Oil Late Model Dirt Series-sanctioned Dart Winternationals. Wall posted a lap of 14.575 seconds at the third-mile oval near Tampa. Wall will start on the pole of the first heat; other heat race polesitters are Dillan White of Crofton, Ky., Eric Jacobsen of Seacliff Beach, Calif., and Terry Casey of New London, Wis.

Overcast and moisture-filled skies threatened with drizzling rain briefly delaying action at the start of hot laps, then began again about 6:30 as time trials concluded. Heats were scheduled for 7 p.m. but were delayed until 9:05 p.m. ... The 42 entries is the first sub-50 field in memory at East Bay. Last year's action averaged about 70 cars over six nights of racing with a single-race low of 58. ... Several drivers with Lucas Oil (including four-time series champ Earl Pearson Jr.) aren't in action Monday; series points don't begin until Thursday. ... In a rule designed to cut tire costs, drivers must use the same four soft-compound tires for both qualifying and the heat race. After heat races, the tire rule opens up. ... Tim Isenberg of Marshfield, Wis., announced his intentions Monday to follow the Lucas Oil Rookie of the Year. ... Steve Shaver of Vienna, W.Va., is piloting the C.J. Rayburn house car; last week he drove the K&L Rumley Enterprises Rocket Chassis at Golden Isles Speedway near Brunswick, Ga. ... Ricky Weiss had problems on his qualifying lap and pulled to the infield. ... Chad Hollenbeck got into the turn-one wall on his qualifying lap. ... Five more nights of racing are scheduled with $5,000-to-win races on Tuesday and Wednesday, $10,000-to-win races on Thursday and Friday and a $12,000-to-win finale on Saturday.