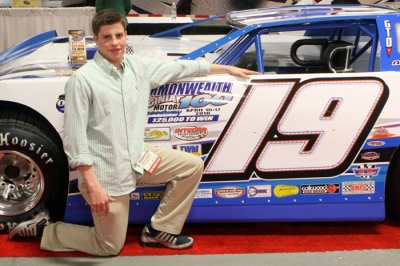 Austin Hubbard poses next to his new ride. (pbase.com/cyberslash)

Austin Hubbard posed alongside his new high-profile Dirt Late Model ride in public for the first time last weekend during the Motorsports 2010 show at the Greater Philadelphia Expo Center in Oaks, Pa. Now the teenage sensation from Seaford, Del., is ready to climb in Dale Beitler's familiar No. 19 and step on the gas. | Georgia-Florida Speedweeks previews

Hubbard, 17, will get that chance when he begins his quest for the 2010 World of Outlaws Late Model Series Rookie of the Year crown during the 39th annual DIRTcar Nationals by University of Northwestern Ohio at Volusia Speedway Park. On his agenda are the national tour's season-opening events on Feb. 11 and 13 and DIRTcar Racing UMP Super Late Model programs on Feb. 8, 9, 10 and 12.

While garnering plenty of attention from the thousands of fans who attended Area Auto Racing News editor Lenny Sammons's 25th annual Motorsports extravaganza outside Philadelphia, Hubbard stood in the DIRTcar Racing booth and veritably bubbled with enthusiasm for his upcoming assault on the Volusia half-mile.

“I'm excited to go down there,” said Hubbard, who had Beitler's Rocket in the Virginia Motor Speedway booth and displayed his father's distinctive Hulk-themed No. 11 in DIRTcar Racing's area. “Last year was the first time I ran at Volusia and I loved it. That's one of my favorite tracks.

“I like the D-shape. I like the size. I like how it's all wide open. I like how you come off (turn) two and you're almost in the fence every lap. It's just such a fun place to race.”

Hubbard already got a taste, albeit an abbreviated one, of what the track will offer during the 2010 DIRTcar Nationals when he visited for a test session in mid-December. Rain cut the practice short, but not before Hubbard found the track's new clay surface to his liking.

“With that new clay, I think racing there is gonna be a blast,” said Hubbard, who had Charles Jarvis's Delaware-based No. 45 machine at his disposal for three days of off-season testing at tracks in the Southeast. “We only made about six laps there because the track was too wet, but you could tell they put some good clay down. It's gonna be hammer-down and a good time for the fans, that's for sure.”

Hubbard speaks glowingly of Volusia despite experiencing a truly forgettable debut trip there in 2009. He qualified for just one of the six events (finishing 22nd in a UMP feature) during an expensive week that saw him lose three powerplants.

Of course, returning to Volusia as the hired-gun driver of Beitler's Reliable Painting machine gives Hubbard a healthy dose of confidence. Following a 2009 season during which Hubbard turned heads with his WoO performances (three top-fives and two fast-time awards in 28 starts) and in crown-jewel events (second-youngest driver to qualify for the World 100 and fast time for the Dirt Track World Championship), Beitler surprised the Dirt Late Model world by hand-picking the rising star to succeed former WoO champion Steve Francis behind the wheel of his blue-and-white cars.

The opportunity to replace Francis, who scored WoO LMS points finishes of second (2009) and third (2008) and won 12 races during his two years with Beitler's West Friendship, Md.-based team, simply blows Hubbard's mind. While his friends at home are still completing high school, he's heading out on the road as a full-time professional driver with a well-established race team financed by Beitler and led by veteran crew chief Robby Allen, who returns as a WoO mechanic for the first time since departing Rick Eckert's team after the 2006 season.

“I don't know how I deserve this,” said Hubbard, who turns 18 on Feb. 17 and will soon complete a final night-school project that allows him to graduate early from Sussex Tech High School. “This is a deal you dream about, but it never happens. I mean, this is one of the premier rides in Dirt Late Model racing, a World of Outlaws championship-caliber team, and to have it so early in my career is a dream come true.

“I know a lot of people are gonna hate me for getting this ride this year. Dale's definitely throwing it out there putting me in the car, and I appreciate that. I guess he saw something in me that made him think he could help take me to the next level, so I want to do everything I can to make sure I take advantage of this.

“Dale's given me a great opportunity,” he added, “and I have to be totally serious about this. I've tried to make sure for the last couple months that I'm always dedicated to racing — live it, breathe it, sleep it — because Dale deserves nothing less from me.”

What are Hubbard's expectations for 2010? He understands there's still plenty for him to learn, but he's setting a goal common for any driver.

“Realistically, I'd like to win one World of Outlaws race,” said Hubbard, who seeks to join Josh Richards (2005), Brian Shirley (2007) and Tim Fuller (2007) as drivers who won WoO features while competing as Rookie of the Year contenders. “If I didn't win a World of Outlaws race this year I would be devastated, because I don't see how we couldn't.

“There's no reason I — well, anybody in my shoes — shouldn't be able to win a race. It's all there for me. I just gotta get after it.”