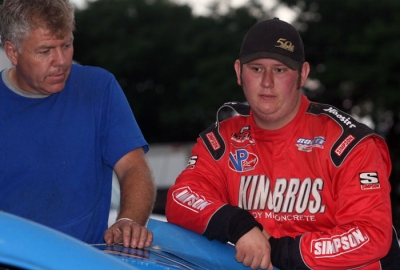 Russ King remembers the timid, uncertain feeling he took into last year’s DIRTcar Nationals by UNOH at Volusia Speedway Park. One flip of the calendar, however, has produced a dramatic change in the up-and-coming driver’s mental outlook. | Georgia-Florida Speedweeks previews

Coming off a 2009 season that saw him obtain a serious full-fender education while marching to World of Outlaws Late Model Series Rookie of the Year honors, King is a new (young) man entering the 39th annual winter racing extravaganza at the D-shaped half-mile track outside Daytona Beach.

King, 20, of Bristolville, Ohio, simply has a much better vibe about the Dirt Late Model portion of the 2010 DIRTcar Nationals, which features the season-opening WoO events on Feb. 11 and 13 as well as UMP DIRTcar-sanctioned programs on Feb. 8, 9, 10 and 12.

“When we went to Volusia last year I didn’t really have any confidence at all,” said King, a big-block modified transplant who had barely two dozen career dirt Late Model starts to his credit when he unloaded in 2009 at Volusia. “It was a whole new experience for me. I didn’t know many guys, and we didn’t really know what we doing with a Late Model. We were just trying to find our way.”

King certainly isn’t returning to Volusia with everything figured out, but going through a season full of hard knocks on the grueling, hyper-competitive Outlaw trail has him in a different place. Though the tough-as-nails kid would have liked to put up a better performance record on the 40-event ’09 WoO schedule (he had eight top-10s and a best finish of ninth), he understands that the campaign was all about learning the ropes.

And make no mistake, King absorbed all the lessons like an eager student. In fact, he chuckles when asked to compare the depth of his knowledge today to one year ago.

“It’s not even in the same ballpark,” said King, who earned the $10,000 Rookie of the Year award over Jordan Bland of Campbellsville, Ky., by a margin of 148 points (3,604-3,456) in a battle determined by the best 30 finishes. “Knowing what we know now, I don’t even know how we attempted to race (as a WoO regular) last year. It’s like anything else. You have to do it to learn what it really takes.”

King has enjoyed a very productive off-season preparing his family-owned equipment, assuring he’ll be in a much stronger position when the first green flag drops at Volusia. With his work in the shop assisted by the hiring of Craig "Snowman" McCrimmon as a full-time mechanic (last year King’s primary crewman for most of the season was veteran wrench Bobby Bachman, a dedicated volunteer who often had to arrange travel to races around his work schedule), he has black- and blue-front end Rocket cars re-skinned and ready to roll with fresh powerplants and his trailer stocked with spare parts.

Buoyed by the most active campaign of his short career, King can’t wait to leave freezing northeastern Ohio for the Sunshine State. He will arrive in Florida several days before the start of competition at Volusia in order to participate in a test session with several other Outlaw regulars at Ocala Speedway, which will host its first-ever WoO event on March 19.

“I’m really looking forward to that test,” said King, who validated his WoO education when he broke through for his first career Dirt Late Model feature victory (worth $12,000) Oct. 3 at McKean County Raceway in East Smethport, Pa. “Last year I would’ve just been out there testing to make laps, but this year I know guys like Chub (Frank) and (Tim) Fuller so I feel like I will understand more about what they’re talking about (during the practice) and can compare it to what my car feels like.”

King hopes the test will help him get off to a great WoO start at Volusia, a track that happens to hold a special place in his heart. He made the first start of his racing career there, entering the big-block modified action during the 2004 DIRTcar Nationals just one month shy of his 15th birthday.

“Volusia is where I learned how to put a car in high gear and go,” said King, whose 44-year-old father, Rex Sr., and 18-year-old brother, Rex Jr. (aka "Cooter"), will also travel south with their big-block modifieds. “I’ll always have good memories of Volusia.”

King experienced some frustration last year during Georgia-Florida Speedweeks, failing to qualify for a main event. The two 50-lap, $10,000-to-win WoO events at Volusia were especially heartbreaking to the upstart. He missed transferring on Thursday night by just two spots in a consolation race, and on Saturday night he was headed to victory in a consy when his car’s engine expired in a cloud of steam.

“We had finally gotten our act together at the end of the week last year and then we blew up,” said King, who turns 21 on March 18. “Hopefully we can run like we did that last night from the start this year and not run into any bad luck. We started behind last year — not only in the points, but with our motor program — so it would be nice to get through Volusia in good shape.”

King has the right focus for the task at hand. With all indications pointing to the 2010 season boasting one of the most competitive, talent-laden full-time driver rosters in WoO history, he knows he can give nothing less than his best if he expects to improve upon his 10th-place finish in the 2009 points standings.

“I gotta take this thing real seriously,” said King, whose racing effort is funded primarily through his family’s business, King Bros. Concrete. “My family is still behind this whole deal, but I know they can’t fund it forever. They’re giving me a chance to do what I love to do, but it’s up to me to make this deal successful. You hope you can turn some heads so hopefully somebody will take notice and pick you up or back you.

“I feel like we can do it,” he continued, looking toward the ’10 campaign. “I felt more comfortable toward the end of last year — we were working with Chub and Fuller, and we had some good runs (top 10s in four out of five races) at Tri-City. So as a realistic goal, I’m looking at a top-seven (finish) in the points and maybe a win if we hit it right at the right track.

“It’s gonna be hard, but if we stay focused I think we can do it.”