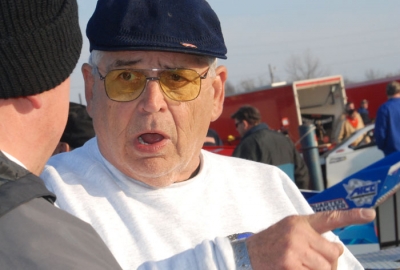 The World of Outlaws Late Model Series is mourning the passing of former chief technical inspector Walter Burson, who succumbed on Saturday following a year-long battle with cancer. Burson, 66, of Sherrodsville, Ohio, died on Saturday morning at the Carroll Healthcare Center in Carrollton, Ohio. He had been hospitalized since Dec. 7 when his condition began deteriorating.

A dirt Late Model official for more than two decades, Burson was a mainstay of the WoO LMS. After working for engine builder Brad Malcuit and spending a long stint (1987-2003) as the technical director for the regional STARS series, he served as the head tech man of the WoO from the national tour's reincarnation under the World Racing Group banner in 2004 through the start of the 2009 season when a diagnosis of lung cancer forced him off the road.

“Walter was a special person and an important part of the World of Outlaws and World Racing Group family,” said World Racing Group CEO Brian Carter. “Walter never failed to bring a smile to our faces and will be sorely missed as we express our deepest sympathy to (Burson's wife) Pat and the rest of Walter's family.”

Affectionately known by many in the racing community as the Big Guy, Burson flashed a distinctive personality and officiating style during his long tenure in the industry. He was gruff yet friendly, tough yet fair.

“He had that rough exterior, but if you really knew him on the inside he was a big teddy bear,” said WoO race director Bret Emrick, who also worked with Burson on the STARS series. “He would do anything for you.”

“Walter always pretended to be a hard ass, but that was only because he wanted the drivers to think he was,” said standout WoO driver Chub Frank, who won four consecutive STARS championships (2000-2003) racing under Burson's watchful eye before moving to the Outlaws trail. “You know how drivers are — they're gonna try to get away with stuff if they think they can. Walter wouldn't let that happen.

“The thing about Walter was, he treated everybody the same way. It didn't matter if you were one of the guys who traveled down the road with him, a guy who ran a few races or a local guy — if you had something wrong, he'd come over and let you know.”

Former WoO champion Steve Francis held Burson in the highest esteem. Like Frank, Francis had a long history with Burson and came to know what made the Buckeye State native tick on and off the track.

“He was an old-school tech guy,” said Francis, a three-time STARS champion (1996-1998) and one of only two drivers who have started all 237 WoO features since 2004. “If you got something past him and then he realized it, he'd come over and say, ‘Hey, you got me this time, but I know what you did and if you do it again I'm gonna hang you up.'

“He understood the sport really, really well, and that's why I had the most respect for Walter of anybody who's ever been in the tech line — not to mention he was an all-around good guy. I know there were times when I cursed him and he cursed me, but after the race it was forgotten and he'd talk and have a beer with you. He knew how to keep friends and his job separate.”

As a chassis builder and stalwart WoO LMS team owner, Mark Richards had as many conversations with Burson as anyone over the past six seasons. He saw in Burson a person who simply cherished his line of work.

“Walter loved racing,” said Richards, who has fielded a car in every WoO event run since 2004 and won the 2009 championship with his 21-year-old son Josh behind the wheel. “He just loved to go racing and be around racing people. He sacrificed a lot to drive up and down the highway and spend so much time away from his family, but he did it because he was with his other family, his racing family.”

In recognition of his devotion to the sport, earlier this year, on June 27 during the Firecracker 100 at Lernerville Speedway in Sarver, Pa., Burson was presented the WoO Lifetime Achievement Award. The pre-race ceremony honoring Burson marked his last appearance at a WoO event.

Burson is survived by his wife Pat, with whom he celebrated his 38th wedding anniversary on Christmas Eve; two sons, Michael Burson of Canal Fulton, Ohio, and Joshua Burson of Brewster, Ohio; one daughter, Michelle (Gary) Burtt of Dellroy, Ohio; and two grandchildren. At Burson's request, he was cremated and a private family service will be held in his memory.

In hopes of defraying some of the excess medical costs Burson incurred during his nearly year-long treatment, Arizona Sport Shirts and GottaRace.com are sponsoring an on-line auction of racing apparel and other assorted items with all proceeds going directly to Burson's family. A website address will soon be released so those in the Dirt Late Model community can log on to participate in the auction, which already includes such pledged items as four new Genesis Shocks; a race car wrap from Indiana Decal Co.; 144 custom T-shirts from Arizona Sport Shirts; various autographed dirt Late Model doors; and four old STARS uniforms courtesy of Bret Emrick.

Arizona Sport Shirts' Gerald Newton said anyone who would like to donate items for auction can contact him at (800) 922-9918 or by e-mail at gerald@gottarace.com.