Notes: Who's next? It's Casebolt in Harris car

From staff, team and series reports 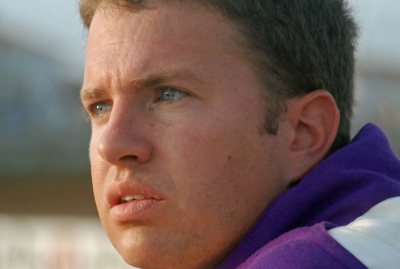 During the 2009 season, car owner Bob Harris had a little fun with the revolving-door cockpit of his No. B1. The Shelbyville, Tenn.-based team fielded cars for so many drivers, Harris stuck a “Who’s next?” decal just to the right of the driver’s seat.

Steve Casebolt of Richmond, Ind., hopes Harris can get rid of that decal altogether as he and Harris have blended race teams with plans to follow the Lucas Oil Late Model Dirt Series in 2010. Casebolt, who finished third in series points in ’07 (in a Dale Beitler-owned car) and ’08 (with his own team), hopes the merger with Harris can return him to success on the Lucas Oil circuit.

“Hopefully the team will be way stronger than we have been,” the 31-year-old Casebolt said Tuesday night on the Lucas Oil Motorsports Hour. “We’re excited. We hope we can make it back to victory lane in some of the Lucas Oil races.”

Casebolt will use his own truck and trailer and race out of his Indiana shop with two new Rocket Chassis provided by Harris. The car, carrying Casebolt's traditional No. c9, will be sponsored by Harris’s Preferred Sandblasting and possibly Dixie Chopper, a current Casebolt sponsor. The lawn mower manufacturer has shifted its marketing focus away from motorsports, but Casebolt is hopeful they’ll stick with him for 2010.

Harris has fielded cars for more than a dozen drivers over the past dozen years including Dale McDowell, Jay Brinkley, Wendell Wallace and Randy Weaver, who had the most success in the car in ‘09, filling in for Harris when he wasn’t in his regular ride.

“There’s been a few people in his cars, and he was a little cautious,” said Casebolt, who first started talking with Harris in early November before heading to Tennessee for a face-to-face meeting. “He didn’t want to commit to somebody that he didn’t know that well, and I was the same way.

“He told me he’s never fired a driver, that guys have kind of come and gone for different reasons,” Casebolt said, adding that success can solve such problems. “If you’re not having good results, it’s really easy for people to get aggravated with one another. ... We hope to have better results and keep things a little more upbeat.” — Todd Turner

HENRY SEEKS A NEW RIDE: Sunoco American Late Model Series champion Jon Henry of Ada, Ohio, announced Monday he’s leaving the Shane and Jennifer Halcomb-owned team with an eye on bigger Dirt Late Model events. The 23-year-old Henry, a modified ace who first drove a Late Model when he joined the Halcombs in July 2008, won an ALMS-high four races in ’09 en route to the title and had eight victories overall. He also netted UMP DIRTcar Rookie of the Year honors. "As of right now the possibilities are endless for 2010 as nothing has been planned yet,” Henry wrote on his website, calling the decision to leave the Halcombs a difficult one. “My goal for this year is to first try and secure a Late Model ride that will allow me to race bigger Late Model races, and then possible do some ARCA testing.” — From team reports

FERGUSON CONNECTS WITH STARRETTE FOR 2010: Focusing on a wider-ranging racing schedule in 2010, Carolina Clash Rookie of the Year Chris Ferguson of Mount Holly, N.C., announced Tuesday that long-time regional sponsor Starrette Trucking will support his team next season. “We have raced pretty much out of our pockets for a few years,” the 19-year-old Ferguson said. "By teaming up with (Jack) Starrette we can have a little bit better budget and a lot more resources available to us. Of course it is certainly not an open checkbook and we intend to run our team like we always have.” Besides Carolina Clash and O’Reilly Southern All Star events, Ferguson plans to travel more extensively, including returning to Ohio’s Eldora Speedway for its major events. Ferguson won two Carolina Clash races in ’09 and four overall. — Kelley Carlton

CLMA LANDS DIRTCAR SANCTIONING: The World Racing Group’s DIRTcar Racing will sanction the 2010 Colorado Late Model Association series for Super Late Models, officials announced Monday. The CLMA becomes the fourth Super Late Model tour to come under the DIRTcar Racing Western Region banner since 2008, joining the Western Allstars, Northwest I-5 Tour and the Southwest Dirt Racing Association. “Sanctioning a growing series like the CLMA is another key element of DIRTcar Racing's expansion," said DIRTcar Racing Western Region director Chris Morgan. "With the CLMA's location in the Rocky Mountain region bordering our DIRTcar series to the east and west, we are creating a bigger base of Super Late Model teams to draw from as we strive to create bigger, more exciting events for the fans and racers.” CLMA officials plan perhaps twice as many races in 2010 with as many as 20 events spread over multiple two-race weekends, said CLMA promotions director Cory Moul, Colorado and Wyoming will remain the epicenter of the series, but tracks in Nebraska, Kansas and New Mexico are possible additions. — Kevin Kovac

ODDS AND ENDS: The National Late Model Series, which runs primarily in the Southeast, has added Hedman Hedders as a title sponsor for 2010. ... Scott Woodhouse has resigned as director of the Western Allstars DIRTcar Late Model Series. Woodhouse plans to serve as race director of Kings Speedway in Hanford, Calif., and DIRTcar’s Chris Morgan is looking for a replacement.