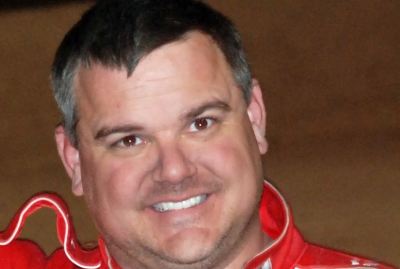 With 21-year-old Josh Richards, Mark’s son and house car driver since ‘05, planning to skip the final three East Bay races to compete in ARCA action at Daytona (Fla.) International Speedway, Mars will take a rare break from his busy off-season racing business to fill in.

It should be a potent combination. In 2009, Richards drove to three feature victories in a 24-hour span at East Bay in the Ernie Davis-owned No. 25, the sister car to the blue No. 1 Rocket Chassis house car Richards fielded en route to the World of Outlaws Late Model Series championship. The younger Richards plans run the first three nights at East Bay before handing off to Mars, a six-time East Bay Winternationals winner and three-time winner in six ’04 events.

Mars has skipped East Bay action in recent years while working with brother Chris at Mars Race Cars, which produces the MB Customs Chassis, the car that carried Mars to an unprecedented three $50,000 victories since Aug. 1. Although Mars hasn’t driven a Rocket Chassis since briefly running one 10 years ago, he’s looking forward to returning to East Bay in a capable car.

"I had opportunities to run other equipment, but I wanted to be in as good of stuff as I could,” said Mars, who plans on testing the No. 25 Rocket next week at the Gibsonton, Fla., oval. “(Mark Richards is) going to win, just like I would. It’s going to be a fun situation.”

"It doesn’t affect anything we’re doing. It’s just going down there to run his car, and gonna get in the driver’s seat, and do as good of job as I can do.”

Mark Richards didn’t want to take another Rocket Chassis regular driver out of a car already planning to compete at East Bay, so he decided to ask Mars to fill the seat of the car his son drove to the Appalachian Mountain Speedweek championship in '09.

"He has a winning record at East Bay. He’s on top of the game right now. Who better to put in Josh’s place at East Bay?” Richards said. “He’s a good pick. He’s willing, if something happened if Josh doesn’t make it to Daytona, (Mars) understands where the deal stands.

“If we get the car as good as it was last year, I think we’ll be in good shape.”

The chassis business is competitive, but Mars downplays any rivalry between the limited edition MB Customs car and Rocket, one of Dirt Late Model racing’s most prolific manufacturers.

"I’m going down there to gas up in a race car, and maybe have a chance to win some races, and do well in them,” Mars said. “I’m not going down there with a tape measure and looking at his cars to see what we need. I’m going down there to be serious enough to win, and have fun. I’m not stealing information from him or anything silly like that. It’s more of a ‘Hey, this is a good fit, and we’ll have a good time.’ ” — Michael Rigsby

GUNTER BUYS WINCHESTER SPEEDWAY: Potomac (Md.) Speedway owner Greg Gunter added another racetrack this week with the purchase of Winchester (Va.) Speedway from long-time owners Charlie and Siretta Schneider. Details of rules and schedules are expected to be revealed later for the 73-year-old oval, a 3/8-mile track that annually hosts several Late Model specials including the Winchester 200. Besides owning Potomac, Gunter also fields the No. 70j driven by Pennsylvania racer D.J. Myers. The Schneiders owned the Winchester track since 1961. — From correspondent reports

WORLD RACING GROUP HIRES SLACK: Roger Slack, the 2007 National Sprint Car Promoter of the Year and the 2007 World of Outlaws Late Model Series Promoter of the Year, has joined the World Racing Group as executive vice president of events. “We are excited to have Roger come on board at World Racing Group,” said CEO Brian Carter. “We have been working hard for the fans and competitors to create spectacular events like the World Finals, the DIRTcar Nationals, the All-Star Weekend, and so many others. Roger's experience will be instrumental in furthering our efforts.” Slack, 35, has been involved in racing all his life and most recently worked at Lowe's Motor Speedway, where he organized and promoted every event at the Lowe’s dirt track from 2000-08. — Chris Dolack

GEORGIA TRACKS CHANGING SURFACES: Two Georgia tracks are planning new surfaces for 2010. Senoia Raceway, which has operated as an asphalt oval for more than 20 years, is returning to dirt for 2010 under new owners Tim Moses, Tony Moses and Jack Mills. Senoia was originally built as a dirt track in 1967 before being paved in 1988. Further south, Waycross Motor Speedway is digging up its asphalt-like, oil-packed dirt oval for 2010, going to a traditional clay surface at the half-mile track. — From track reports

TILLEY TAKES BATTLE OF BLUEGRASS REINS: Chris Tilley of Somerset, Ky., has been hired as president of the O’Reilly Battle of the Bluegrass DirtCar Series by CEO Tom McConnell and will handle day-to-day operations of the Kentucky-based Late Model and modified tours. Tilley announced Noel Hargis will serve as competition director for the series. — From series reports

APPALACHIAN SPEEDWEEK SET FOR 2010: The second annual Appalachian Mountain Late Model Speedweek has been scheduled for June 5-11 among tracks in Maryland, Virginia and Pennsylvania. "We had a good week and were overall very happy with way things went, but we also targeted some areas that we would like to improve on to make things run even better,” said event co-founder J.R. Keifer of Bedford (Pa.) Speedway. “As far as 2010 goes, the interest is almost overwhelming. Every single track and sponsor from the inaugural season stated almost immediately that they wanted to be a part of the 2010 Speedweek and the staff is working hard to expand on the sponsorships as far as getting products and extra incentives for the competitors at each race.” The $5,000-to-win events are scheduled for Hagerstown (Md.) Speedway, Selinsgrove (Pa.) Speedway, Winchester (Va.) Speedway, Williams Grove (Pa.) Speedway, Lincoln (Pa.) Speedway, Port Royal (Pa.) Speedway and Bedford. — Kurt Smith

ALL I WANT FOR CHRISTMAS ...: Looking for the perfect present for the race fan on your Christmas list? How about a ride in the Volunteer Speedway two-seater Late Model around the high banks of the Bulls Gap, Tenn., track? Former track champions Jimmy Owens, Vic Hill, Mark Douglas and Scott Sexton will provide five-lap rides Jan. 2 for those presenting $50 gift certificates purchased before Christmas. Rides purchased on Jan. 2 will be only three laps. The ride-along is scheduled from noon to 5 p.m. with a raindate of Jan. 9. For more information, call Volunteer Speedway facilities manager David Bryant at (423) 235-5420 or (865) 978-1752. — From track reports

BANQUET NOTICES: The O’Reilly All Star Late Model Series has scheduled its postseason banquet for Feb. 27 at at the Days Inn and Conference Center in Butler, Pa., in with Lernerville Speedway’s banquet. Robbie Blair won the ’09 O’Reilly All Star title. ... The Southern Regional Racing Series has scheduled its banquet for Jan. 8 at the Doubletree Hotel in Murfreesboro, Tenn. Champion Jay Brinkley receives top billing. — From series reports

ODDS AND ENDS: Sheltra Motorsports is mourning the loss of Kenny Saul, the father of Sheltra Motorsports dirt program manager Mark Saul, a long-time Dirt Late Model crew chief. The elder Saul, 77, died of Thursday of natural causes at his daughter’s home in Richmond, Ind. ... Raymond Young of Dalton, Ga., the long-time owner of North Georgia Speedway, died Thursday at Hamilton Medical Center. Arrangements will be announced later by Julian Peeples Funeral Home. ... O’Reilly Southern Nationals champion Tommy Kerr of Maryville, Tenn., is looking to hire a new crew chief. Veteran Gary Winger, who boosted Kerr the past two seasons, left the team to return full-time to his racing business, GW Performance. ... Tyler County Speedway in Middlebourne, W.Va., will run AMRA-sanctioned weekly events in 2010 after a year hiatus from the organization. ... Proctor (Minn.) Speedway was named 2009 WISSOTA Track of the Year at the recent WISSOTA banquet in St. Cloud, Minn. Proctor was picked among a dozen candidates from the 60 WISSOTA-sanctioned tracks in the upper Midwest.