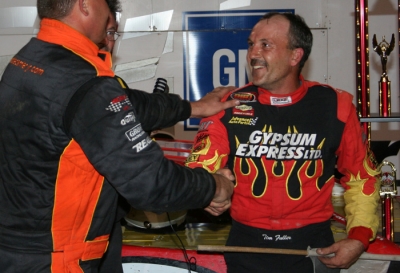 Tim Fuller didn’t think he could do it. That’s the primary reason the Watertown, N.Y., standout is so proud to have clinched the 2007 World of Outlaws Late Model Series Rookie of the Year Award.

“When this season started, I never would’ve thought we could win rookie of the year,” said Fuller, a newcomer to the dirt Late Model ranks after starring for more than a decade in the Northeast’s Dirtcar big-block Modified division. “Our focus this year was to win the big-block championship, so I didn’t think we could do both.”

But Fuller, who turns 40 on Oct. 28, defied his own expectations. While still concentrating on the Advance Auto Parts Super Dirtcar Series schedule for the big-block nodifieds, he managed to enter a vast majority of the season’s WoO events and not only beat the talented Brian Shirley of Chatham, Ill., for the rookie laurels, but also establish himself as a dirt Late Model driver to reckon with for years to come.

What’s more, with Fuller needing a 14th-place finish in this Sunday’s Eastern States 200 at Orange County Fair Speedway in Middletown, N.Y., to claim his second career Mr. Dirtcar Modified title, he’s on the brink of making his 2007 campaign truly one to remember.

“If I can win that nodified championship this weekend, then this will definitely be my best year ever,” said Fuller, who leads Dirtcar big-block star Brett Hearn of Sussex, N.J., by 68 points entering Eastern States Weekend. “But like I told Smoke (chief mechanic Mike Countryman) — even if we don’t win it, it’s still been a great year.”

Indeed, Fuller has performed a brilliant balancing act this season, remaining at the top of his game on the Advance Auto Parts Super Dirtcar Series while rapidly learning the ropes of big-time dirt Late Model racing. He went into ’07 unsure if he’d even be able to squeeze in 30 WoO events amidst his big-block Modified commitments — the Rookie of the Year was determined this year using a driver’s best 30 finishes — but ended up entering 35 of the season’s 43 programs to date and became a bona fide contender along the way.

“To only miss the (eight) Late Model shows I have this year and win the rookie of the year is an accomplishment for me,” said Fuller. “I couldn’t have done it alone. There’s been a lot of juggling and flying back-and-forth between Late Model and nodified shows, and it’s all worked out only because my guys have wanted it as bad as I did.”

It’s been just over two years since Fuller made his first dirt Late Model start. He accepted an offer from John Wight, whose Gypsum Express team fields big-block modifieds for Fuller’s good buddy Billy Decker, to try out a Late Model as a teammate to Decker and he immediately fell in love with the full-bodied car.

After racing in four WoO events in 2005 and three in 2006 plus a handful of other dirt Late Model shows, Fuller made a deal with Wight to step up his dirt Late Model effort this season. Using Wight’s cars and motors and a hauler and tools supplied by his big-block Modified backer John Lazore, Fuller started running Wight’s red Rocket No. 19 in Florida during February’s Dirtcar Nationals with an eye on doing as much dirt Late Model racing as possible.

The early portion of the WoO schedule was a struggle for Fuller, who in his first 14 starts of ’07 failed to qualify four times and didn’t record a single top-10 finish. But then he ran up front all night and finished fourth on May 18 at I-96 Speedway in Lake Odessa, Mich., and suddenly something clicked. In his 21 starts since that milestone evening, he’s registered one win (his first career WoO score on June 12 at River Cities Speedway in Grand Forks, N.Dak.), 10 top-five finishes (including runner-up finishes at Iowa’s Knoxville Raceway and Kansas’s Lakeside Speedway) and 15 top-10 runs.

Fuller’s emergence carried him to the rookie crown over the 26-year-old Shirley, a former flat-track motorcycle racer who got a late start on the WoO campaign. Shirley, whose Petroff Towing team picked up its traveling pace after being approved for rookie-contender status in May, was able to match Fuller by entering 35 tour events to date and winning his first career WoO feature (on May 13 at his home state’s Lincoln Speedway), but his finishing record (five top-fives, including four runners-up, and 13 top-10s) wasn’t enough to overcome Fuller.

With only the two 50-lap features of the Outlaws World Finals on Nov. 1-3 at the Dirt Track @ Lowe’s Motor Speedway in Concord, N.C., remaining on the WoO schedule, Fuller holds a 189-point lead (3,884-3,695) over Shirley in the rookie standings. Shirley can’t make up that much ground at Lowe's, so Fuller is officially the rookie of the year.

“Shirley is a strong racer,” said Fuller. “I figured that if he didn’t have any bad luck, we wouldn’t be able to beat him. But he dropped out of some races — and with me having to miss races to run the modified, that helped me out.”

Fuller will collect $10,000 for capturing the rookie crown, while Shirley will pick up $5,000 for taking runner-up honors. Both drivers will also earn more than $20,000 apiece in WoO points-fund cash; they appear toward finishes of eighth (Fuller) and ninth (Shirley) in the final points standings.

With a Mr. Dirtcar Modified championship added in, Fuller could bring home nearly $100,000 in post-season cash from the World Racing Group.

Fuller’s future is pointed squarely on the dirt Late Model world, where he hopes to chase even bigger financial rewards. He has already begun discussions with Wight on a full-bore WoO assault in 2008; Fuller’s big-block modified equipment will remain in his shop, but just for selected events.

Could Fuller follow in the tire tracks of his fellow big-block modified star-turned-Late Model standout Tim McCreadie, a Watertown, N.Y., native who was the WoO Rookie of the Year in 2004 and champion in 2006? Fuller won’t go that far, but he feels like he’s reached the point where he can be a serious contender next season.

“We’re still learning, but we at least know what we’re doing with a Late Model now,” said Fuller, who is married and has a 2-year-old daughter. “Early in the year we were doing some things wrong and really struggled. But we started hanging around with Chub (Frank), and we went down to Rocket (Chassis) and learned a lot from putting the car on the scales.

“Little by little, it started coming to us, and now we feel like we can go somewhere and have a car capable of running up front. It makes me real excited for next year to get here.”

World of Outlaws rookies of the year