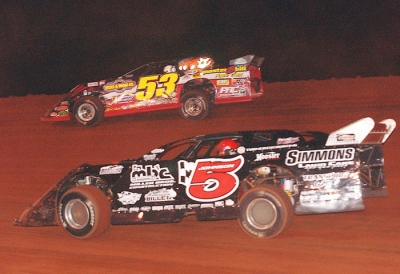 EASTABOGA, Ala. (Oct. 30) — Surviving challenges from Ronnie Johnson and a near disastrous brush with a spun car, Ray Cook of Brasstown, N.C., continued his winningest his season with a 40-lap victory at Talladega Short Track. Friday's $2,000-to-win unsanctioned race was schedule to serve as a tuneup for Saturday's O'Reilly Southern All Star Racing Series event, but Saturday's racing was rained out.

On Friday, Cook got the jump on polesitter and fast qualifier Shane Clanton of Locust Grove, Ga., at the outset, but Clanton fell out during a brief rain delay on the seventh lap. The sixth-starting Johnson, a Hall of Famer from Chattanooga, Tenn., moved into the runner-up slot before the halfway point and ducked underneath Cook several times looking for the lead.

Cook's major scare came on lap 36 when a spun car sat between turns three and four in Cook's high groove. He bailed out to the right, went over the banking and made contact with a pit wall. Cook was able to return to the race and led the final four laps.

"The car was just sitting there and I'd already committed to the corner and it was either hit him or go out of the racetrack," said Cook, who won his 11th race of 2009. "I came in there with a head of steam and there wasn't much I could do. I knew I was gonna wreck if I hit him, so I went the other way and ended up hitting the outside wall. We were fortunate to not hit harder, so we could keep racing after that happened.

"I grabbed steering wheel, brakes, gas — drawed up in the seat and did everything you could do to miss that car. It was extremely close, and I don't really know how we missed him."

Johnson settled for second at the third-mile oval where he's a nine-time winner on the Southern All Star tour.

"I always enjoy a good race, but I'd have probably enjoyed it better if the finishing positions had been swapped around," a smiling Johnson said. "Ray is good to race against, but it's been hard to do that much lately because he's always out front. It'd have been sweet to beat him considering how well he's been running this year, but we're going home with nothing tore up and no one mad at us, so you've gotta consider it a good night."

Ronny Lee Hollingsworth of Northport, Ala., was third followed by Jonathan Davenport of Blairsville, Ga., and track champion Tim Busha of Boaz, Ala.