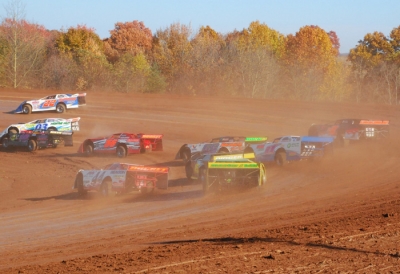 SARVER, Pa. (Oct. 25) — Polesitter Matt Lux of Franklin, Pa., led all 25 laps Sunday at Lernerville Speedway on Sunday for a victory in the inaugural DIRTcar Round Up Steel City Stampede. Lux's $2,000 victory was his first at Lernerville in more than two years.

Jared Miley of South Park, Pa., finished second followed by Gregg Satterlee of Rochester Mills, Pa., Russ King of Bristolville, Ohio, and Dave Hess Jr. of Waterford, Pa. John Flinner of Zelienople, Pa., gave up his outside pole position when ignition problems forced him to scratch after pulling onto the track.

Lux took the lead at the outset with the seventh-starting Satterlee quickly up to second after the first lap. King and Hess moved into the mix a few laps later, and King took second from Satterlee on the eighth lap as they battled with Lux. Miley dropped Satterlee to fourth on a restart while Lux pulled away, building a straightaway lead before a lap-15 caution.

With Satterlee, Miley and King battling on the restart, Lux edged away. Miley shook free of the battle and began closing on Lux, and he caught a break when Bobby Marietta's spin before Lux took the white flag set up a two-lap shootout to the finish. Lux pulled away on the restart to outrun Miley to the checkered flag.