Back in action, Sexton dials 411 to nip White 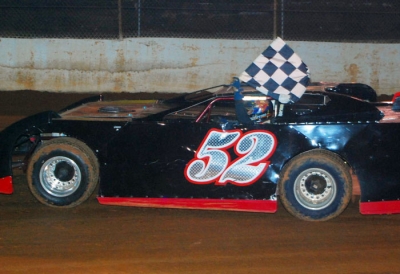 White led virtually all the way, but the wall-scraping Sexton was all over him the final 16 laps in trying to find a way past. Sexton finally slipped under White exiting turn four on the final lap and beat him to the finish line by just a foot at the 3/8-mile oval.

Sexton, one of east Tennessee's top drivers in the 1990s who hasn't raced in recent years, raced to victory in a Bryan King-owned entry. White settled for second with Brad Hall of Knoxville, Tenn., in third. Fast qualifier Ross White of Karns, Tenn., was fourth and Jason Welshan of Maryville, Tenn., rounded out the top five in the final event of the season at 411.

Notes: Sexton's black No. 52 DWB Race Car didn't carry any sponsorship decals. ... Sexton spent the first half of the season driving the hauler for Lucas Oil Late Model Dirt Series regular John Blankenship, a West Virginian who races out of an east Tennessee race shop. ... Sexton has been sidelined in part because he's undergone six surgeries after an accident. ... He dedicated the victory to his late father. ... Sexton thanked several people for sticking with him, including his sons Derek and Zach and Sexton's brother Jason, along with Volunteer Speedway promoter and long-time crew chief David Bryant. ... Sexton's previous special event victory came Nov. 19, 2005, in the O'Reilly Southern All Star-sanctioned Gobbler at Cleveland (Tenn.) Speedway. He has 10 career Southern All Star victories. ... Among cautions in the main event were lap-nine spin by Luke Laney, a lap-11 yellow for a crash by Steve Jones in the turn-two wall. ... Laney spun again on lap 34. ... 411 runs a Crate Late Model division weekly. The 2009 champion Jason Cardwell finished seventh.