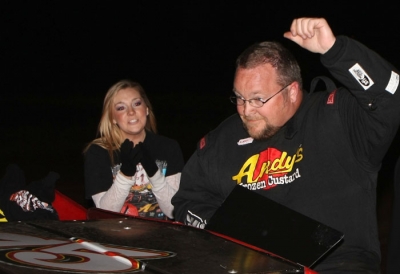 Phillips and Frye battled out front early, swapping the top spot before Phillips took control following a lap-17 caution, the only yellow of the race, and led the rest of the way.

Frye, of Greenbrier, Ark., and Payne, of Springfield, battled for second late in the race with Payne making contact with Frye heading for the checkered flag, spinning Frye's No. 66 in turn four. Payne crossed the finish line in second but was dropped to the tail of the order for rough driving. Frye, likewise, was placed last in the 20-car field for retaliating against Payne after the race.

That moved Brad Looney of Republic, Mo., up to second with Justin Wells of Aurora, Mo., third in the racing honoring a five-time NASCAR Weekly Racing Series champion and one of short-track racing's winningest drivers. Eric Turner of Springfield finished fourth and Tony Jackson Jr. of Lebanon, Mo., rounded out the top five. Seventeen of 20 starters were running at the conclusion of the 35-lapper.