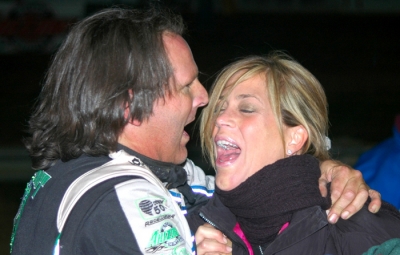 One of the most prestigious and richest titles in Dirt Late Model racing is on the line this weekend at K-C Raceway just south of Chillicothe, Ohio. The 27th annual Dirt Track World Championship presented by GottaRace.com will pay $50,000 to the winner at an event likely to draw more than 125 cars as the 3/8-mile K-C oval hosts the event for the third consecutive year.

K-C's previous winners, Scott Bloomquist in 2005 and Shannon Babb in 2006, will be among the drivers gunning for a victory.

“It was special winning that weekend,” said Bloomquist, who broke through for his first DTWC victory after being denied at other venues. “It kind of put the cap on our career. It wasn’t a race we didn’t think we could win. It was frustrating because there was always a problem or something and some people try to gauge off that. I knew we could win that race and it was a matter of time and it was so good to happen during our 25th anniversary and the 25th anniversary of the race.”

In a year when Bloomquist's success as a driver has been overshadowed by his success as a chassis builder, he believes that Bloomquist Race Cars drivers Brady Smith, Chris Madden, Michael England and World 100 winner Jimmy Owens will be in the mix at the DTWC. “To some degree, I guess but I’d bet it will be one of my cars that wins the race, whether it’s me or one of my boys in my cars," Bloomquist said.

The DTWC has been a title drivers have gunned for since promoter Carl Short made history in 1981 at Pennsboro (W.Va.) Speedway when the inaugural race winner was the Cinderella success story of Jim Dunn of Roseville, Ohio, who rallied from a consolation to win a stunning $30,000 payday.

“It's big. We've won it five times and at two different tracks that are now closed,” said Freddy Smith of Seymour, Tenn., who continues to race past his 60th birthday. “No one will win it again at those venues. To be honest, with the finishes we've had, we could've won it a few more times I feel. It is so much harder to win today because the kids out there have good money behind them and good cars with good motors. No one is building a bad car or motor, so it is a lot tougher to win."

Tougher to win because of the competition, but easier to win if you've got a car that can go to the front, at least at K-C, drivers say. Passing was often difficult at Pennsboro and during daytime events at other tracks for an event formerly held on Sunday afternooons. K-C's Saturday evening features have proven to provide a worthy surface for the race.

"You can go to some tracks and be the fastest car but can't win because you can’t pass," Bloomquist said. "It’s not that way at K-C.”

Iowa driver Brian Birkhofer, who finished second to Bloomquist in 2005, looks forward to another trip to K-C. “That place has come a long way since the short span I’ve been there," Birkhofer said. "The track sure is racy and well prepared. If you’re comparing it to Pennsboro or something like that, hands down it’s better.”

“I love the track over there,” said veteran driver Rick Aukland of Zanesville, Ohio. “I thought taking the Dirt Track World Championship to K-C was a nice change. That track is racy from bottom to top."

Steve Francis, who won the 1999 Dirt Track World Championship at West Virginia Motor Speedway in Mineral Wells, W.Va., likes K-C in part because of its proximity to his Ashland, Ky., home.

"When I first started racing back years ago, (NASCAR superstar) Jeff Gordon and I both raced there a lot with him in the sprint cars and me in the Late Models, and they kind of made a big deal about us being the youngest Late Model driver and the youngest Sprint Car driver," Francis said. "We were both about 13 or 14 years old racing down there. So I have a lot of history with that place being there a lot and racing there a lot, and I’ll get to sleep in my own bed during the Dirt Track World Championship weekend, so I think that’s an advantage, too."