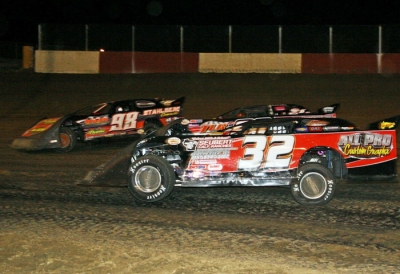 Jason Rauen (98) fights off Terry Anvelink (32) and others at Dubuque. (Paul Misner)

DUBUQUE, Iowa (Oct. 18) — Fighting off challengers in a mad scramble to the finish, Jason Rauen of Farley, Iowa, held on at Dubuque Speedway to win the Spec Engine Nationals. Rauen pocketed a career-high $7,000 for the victory.

Adam Hensel of Barron, Wis., rallied six spots in the second half of the 100-lap feature to finished second followed by Terry Anvelink of Navarino, Wis., Lance Matthees of Winona, Minn., and last year's winner Jeff Aikey of Waterloo, Iowa. Jeremiah Hurst of Dubuque ran among the leaders through the first half of the race but faded to ninth and Terry Neal of Ely, Iowa, broke a right rear axle on the final restart, giving up the second position. | Slideshow

The high-running Rauen wasn't challenged in leading the first 50 laps, when the race was halted to give crews 10 minutes to work on their cars for the remainder of the event. Hensel, in seventh on lap 54, charged toward the front and caught Rauen with five laps remaining as the duo battled side-by-side.

Soon it was a multicar scramble up front as Matthees and Anvelink burst into contention while Aikey tried to catch the top four.

Rauen, whose high groove lead to his No. 98 glancing off the turn-four wall several times, was able to hold on for the victory, and his powerplant passed postrace inspection with flying colors. The event for spec engine cars drew IMCA-legal and WISSOTA-legal drivers from several states.