From track and Bakersfield.com reports 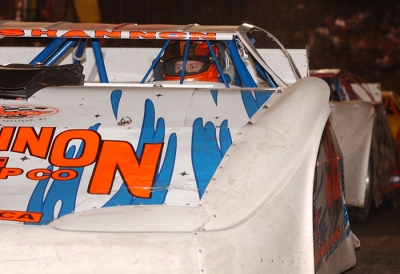 Chris Shannon focuses on the task at hand. (K.C. Rooney)

BAKERSFIELD, Calif. (Oct. 10) — Rebounding from a lackluster ninth-place finish in the weekend opener, polesitter Chris Shannon of Merced, Calif., led all 50 laps in the finale of the Budweiser West Coast Nationals for a $3,000 victory at Bakersfield Speedway.

Shannon stuck with the low groove en route to victory as he fended off challenges from runner-up Steve Drake of San Luis Obispo, Calif., and third-place finisher Brad Pounds of Bakersfield. Rob Mayea of Bend, Ore., was fourth and Bobby Hogge IV of Salinas, Calif., rounded out the top five. | Slideshow

Trevor Glaser of Tangent, Ore., who won Friday's opener, was disqualified after winning a heat race for failing to report to the scales. He advanced to the main event through the consolation race but was the first driver out after two early spins in the feature.