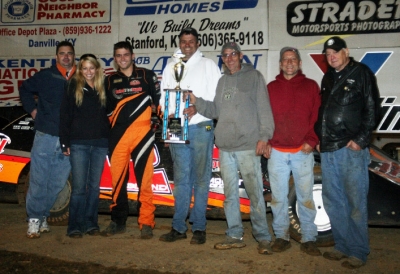 Racing alongside some of the country's best Dirt Late Model drivers in 2009 has clearly paid dividends for a pair of 20-year-old World of Outlaws Late Model Series Rookie of the Year contenders.

During an off-weekend from the WoO schedule, Russ King of Bristolville, Ohio, who is on the verge of clinching the '09 WoO Rookie of the Year title, and his closest pursuer in the standings, Jordan Bland of Campbellsville, Ky., scored victories in regional action. | King collects $12,000 at McKean | Bland captures Fall Classic opener

King struck the biggest blow for the Outlaw upstarts, pocketing a whopping $12,000 paycheck for his win in a Northern Tier United Late Model Series event that was postponed one week by rain. He unabashedly attributed his breakthrough success to the education he's received on this year's challenging WoO tour.

“Running with the Outlaw guys has definitely made me a better driver,” said King, who launched his Dirt Late Model career last season after spending four years in the big-block modified division. “You have to be ball's-out when you're in an Outlaw race, run every lap 100 percent or you're going backwards. Those guys just don't make mistakes so you have to raise your level.

“If I ran an Outlaw race at McKean County I would've been happy with a top-10 (finish), but when you go from running with the Outlaws to a regional show like this (at MCR) you feel like you have a shot to win. I don't consider myself the caliber of the Outlaw guys, but there were some real good guys at McKean — guys who have run up front in Outlaw races — and I feel like I can race with them because of everything I've learned this season.”

King entered Saturday's program having recorded a top 10 finish in four of the last five WoO events — a surge that pushed his edge in the rookie standings to a nearly insurmountable 148 points — and just one week removed from a solid fourth-place finish in the preliminary feature of McKean County's ULMS weekend. His confidence was further boosted when both WoO veteran Chub Frank and 2009 All-Star Late Model Series points runner-up Boom Briggs – two Pennsylvania drivers who attended McKean's preliminary show but did not return on Saturday for the rescheduled finale – told King after the rainout was announced that “we'd have a legitimate shot to win if we went back,” said the hard-nosed young racer.

Proving two of his mentors right, King ran the race of his life. He inherited the lead on lap 30 when Chad Valone spun due to a flat tire and never looked back, holding off a late threat from New York veteran Dick Barton, who won a WoO event in 2006, to preserve the checkered flag.

“Considering I just got a $9,000 motor bill one week ago, I was pretty pumped,” said King, who has eight top-10 finishes in 31 WoO starts this season (he's entered all 37 events). “And winning a race that Boom and Chub have won — guys I really look up to — means a lot to me.

“I'm real excited,” he continued. “As much as we've struggled sometimes this year, it's great to get a big win like this. It makes everyone on the team feel good.”

Not surprisingly, Frank and Briggs were among nearly two-dozen people who sent King congratulatory wishes soon after the race ended.

“The news definitely travels fast,” King said. “My (cell) phone went dead at the track, but when I got it back on I already had like 20 text messages. It felt good to hear from those guys we race with,” he added. “I know those guys want me to do good because I love this stuff. This is what I want to do.”

Bland, meanwhile, made his presence known at Ponderosa, a 3/8-mile oval where he ran often early in his six-year dirt Late Model career. Just one bad break might have prevented him from sweeping the entire weekend.

After setting fast time and bagging a $2,500 payoff for winning Friday night's preliminary feature (the race was shortened to 23 laps from a scheduled 30 because of rough track conditions), Bland roared back on Saturday with the quickest qualifying lap and an early pass of Don O'Neal to grab the lead on lap eight of the 50-lapper. But both Bland and O'Neal ran into trouble on lap 13, getting swept up in a multicar tangle in front of the leaders.

“We had almost a straightaway on O'Neal and then the track got blocked from a wreck,” said Bland, who drives a Bloomquist Race Race owned by his father Jeff Bland. “The caution lights were shorted out, so I didn't see the caution was out and I went in there wide-open and got into the cars that wrecked. O'Neal did too.”

While O'Neal was eliminated from further action, Bland managed to continue and restart as the leader, albeit with damage. His car sported dented bodywork, a bent tie rod and an upper control arm that lodged between the shock and spring — and, most significantly, no brakes.

Despite the handicaps, Bland drove out to a straightaway edge until lapped traffic entered the picture. He struggled to pass the slower machines and was overtaken for the lead on lap 40 by Mike Marlar, who went on to the $7,500 victory as Bland settled for second.

“I could pull away without a problem when I could use the whole racetrack to maneuver around,” said Bland, whose two previous Dirt Late Model feature wins came last year at Ponderosa and Bluegrass Speedway in Bardstown, Ky. “But once I got into lapped traffic, without brakes I couldn't turn and get under anybody.

“I really think we could've straightaway-ed ‘em if we didn't lose the brakes, but what can you do? It was still a heck of a weekend for us.”